The son of a Jerusalem rabbi indicted earlier this month for raping seven of his followers has been arrested in a sexual assault case of his own.

The Supreme Court on Thursday ruled in favor of the prosecution in the case, allowing the publication of 38-year-old Lior Yazdi’s name as well as the allegations against him.

One of the complainants against his father, 59-year-old Rabbi Moshe Yazdi, told police Lior Yazdi had raped her in her home while her four children were inside in 2017.

The younger Yazdi was arrested last week and is suspected of rape, intimidation and obstruction of justice. While the Supreme Court rejected his petition against the publication of his identity, it ruled that he could be released to house arrest.

Responding to the decision, lawyer Ariel Atari, who is representing the accuser, said, “This is a difficult case in which a son followed in the footsteps of his father and brutally raped a daughter in the community.”

The attorney added that Lior Yazdi falsified evidence in an attempt to get away with the crime.

David Halevi, who is representing Lior Yazdi, said the case against his client is full of holes and claimed that the prosecution has held off on indicting him because it doesn’t have a case.

According to the indictment, Moshe Yazdi served since the 1990s as a rabbi in the Amudei Hashalom community in Jerusalem’s Bukharim neighborhood. He also headed a community nonprofit organization.

During daily lessons to his followers, some of whom were newly religious, Yazdi urged giving up intellectual thought or personal feelings and instead submitting to a mindset directed by values and principles laid out in the Torah. He also claimed to be one of the 36 righteous people whose merits, according to some Jewish traditions, ensure the continued existence of the world, and stressed to his followers the need for their absolute obedience to his orders, prosecutors said.

He claimed to consult with the God, deceased rabbis and others when giving personal advice to any of his followers, the indictment alleged. 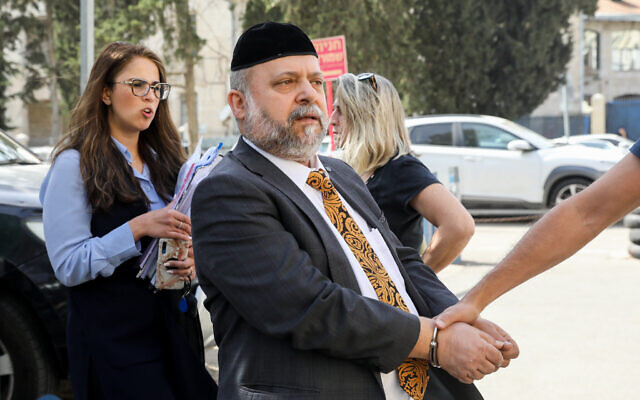 Rabbi Moshe Yazdi, arrested on suspicion of sexual offenses against women, is brought for a court hearing at the Jerusalem Magistrate’s Court, on April 27, 2022. (Flash90)

Yazdi convinced the alleged victims that sins they committed had left “sparks of impurity” inside them that could only be purified through sex acts with him, prosecutors said. He also told each of his alleged victims they had special souls and impressed upon them that they must not tell anyone else what had happened between them.

The hundreds of thousands of shekels he got from his followers were deposited in various bank accounts in the names of other people in an effort to hide the transactions, prosecutors said.

Police have said that in some cases Yazdi assaulted women on the day of their weddings.

Some of the alleged crimes were committed well over a decade ago, with the most recent having been a year and a half ago, police said.