Skip to content
HomeWorldIntel is the Dow’s biggest loser 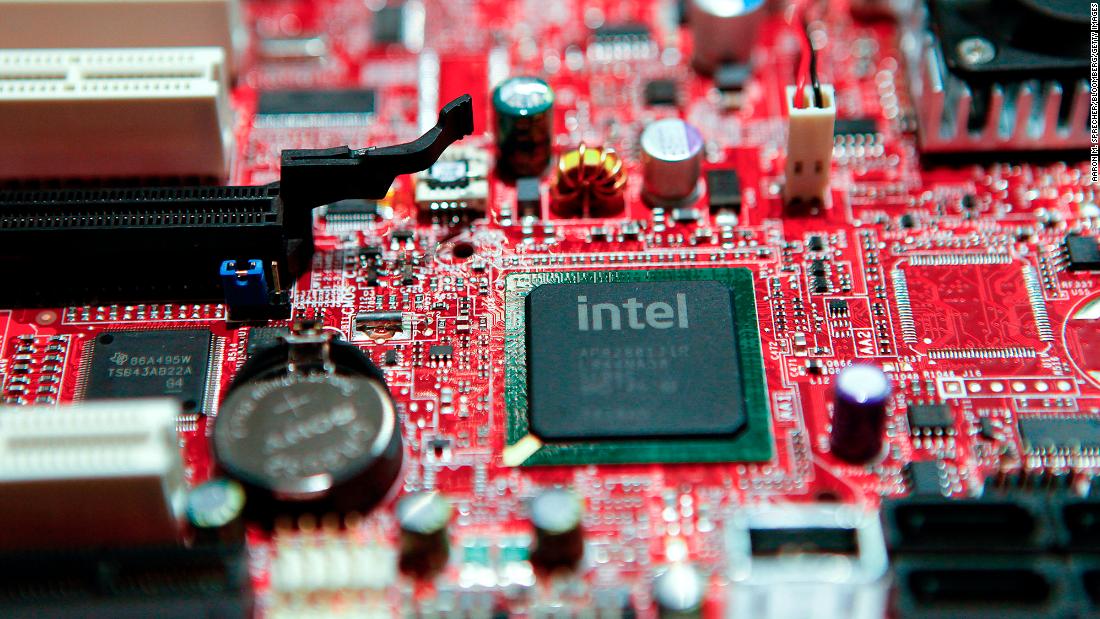 A version of this story first appeared in CNN Business’ Before the Bell newsletter. Not a subscriber? You can sign up right here.
Shares of Intel (INTC) are down more than 45% this year, making it the biggest dog of the Dow. Intel is struggling despite well-publicized plans to build more plants in the United States and hire more at home. President Biden even just toured the new Intel facility in Ohio for its groundbreaking ceremony.
To be fair, Intel is not the only chip company that’s having a tough time this year.
Shares of semiconductor rivals Nvidia (NVDA) and AMD (AMD) have both plunged more than 50%. The supply chain woes and fears of about a rapidly slowing economy are weighing on the entire sector. The benchmark Philadelphia Semiconductor Index (SOX), or SOX as it is known on Wall Street, is down nearly 40% in 2022.
But Intel has been a laggard for longer. Shares are now trading at their lowest level since May 2016. The stock is down more than 25% in the past five years while the SOX has more than doubled, Nvidia is up nearly 200% and AMD has soared more than 400%.
Can newish CEO Pat Gelsinger (he took over in 2021) turn Intel around? Investors may give Gelsinger more time to get the company back on track.
How much time is unclear though. Gelsinger’s predecessor, Bob Swan, was CEO for only a little more than two years. Swan took over for Brian Krzanich, who stepped down in 2018 after disclosing a “‘past consensual relationship” with an Intel employee.
One fund manager who owns the stock thinks Gelsinger will be able to return Intel to its former glory. But he said it will take time and that investors don’t need to rush into the stock just yet.
“I don’t think there is a sense of urgency to buy. But longer-term, I think Intel will right the ship,” said Jeff Travis, portfolio manager of Oak Associates Funds. Travis owns Intel in the Red Oak Technology Select fund.
Travis does think that semiconductor stocks are still a good “secular growth industry” and that valuations are now attractive given how sharply the stocks have fallen.
He said that chip equipment companies KLA (KLAC) and Kulicke and Soffa (KLIC), which sell products to major semiconductor manufacturers, and Ambarella (AMBA), whose video processing chips are used in cars, are top picks.
So is the worst over for these and other semiconductor companies? Goldman Sachs analysts don’t think so. They cut their revenue and earnings estimates on Friday for memory chip leaders Micron (MU), which will report earnings on Thursday, and Western Digital (WDC).
“There have been a string of negative industry data points,” the analysts noted, pointing to cautious comments about demand from Intel, AMD and Nvidia in recent weeks. The Goldman analysts added that there is “weakness across the PC, enterprise server, and smartphone end-markets.”
So it may be soon to call a bottom for the major chip companies just yet.

Shocktober or Rocktober for stocks?

September is historically the worst month for the stock market. This September is proving to be no exception.
The Dow has plunged more than 6% so far this month and is not far from a 52-week low. That follows a more than a 4% drop in August. The S&P 500 and Nasdaq have fared even worse, plummeting 7% and 8% respectively.
Could the market bounce back in October, though? Sure, the month that ends with Halloween has a bad reputation for being a scary one for traders. Wall Street has had some historic plunges in October. Think 1929, 1987 and 2008 for example.
But these massive October sell-offs are actually anomalies. Stocks often enjoy strong year-end rallies, as investors bet on healthy earnings growth and strong consumer spending during the holidays.
Retail sales have been rising lately, boosted by a big drop in gas and oil prices helping to put more money in consumers’ pockets. So there are hopes that Americans will keep shopping, especially since the job market remains strong as well. That should boost corporate profits.
Still, turmoil in global markets, particularly due to inflation, is leading blue chip companies like FedEx (FDX) to issue warnings about their earnings and the economy.
Most major corporations will report earnings for the third quarter in October…and that means they may also give updated outlooks for the fourth quarter and provide some first glimpses about what they are expecting for sales and profits in 2023.
Analysts have already cut their forecasts for the third quarter pretty substantially in the past few weeks. According to data from FactSet, Wall Street now is predicting earnings growth of just 3.2% for the third quarter.
If they need to start slashing estimates for the end of this year and next year as well, that could push stocks even lower.
“There is more downside risk for US stocks,” said Luke Tilley, chief economist and head of asset allocation and quantitative services for Wilmington Trust Investment Advisors.
Monday: Germany GDP
Tuesday: US durable orders; US consumer confidence; US new home sales; earnings from Jabil (JBL), United Natural Foods (UNFI) and Blackberry (BB)
Wednesday: US pending home sales; earnings from Cintas (CTAS) and Paychex (PAYX)
Thursday: US GDP (third estimate for Q2); US weekly jobless claims: Porsche IPO; earnings from CarMax (KMX), Rite Aid (RAD), Bed Bath & Beyond (BBBY), Nike (NKE) and Micron
Friday: End of third quarter; US PCE inflation; US personal income and spending; US U. of Michigan consumer sentiment; China PMI; India interest rate decision; earnings from Evergrande