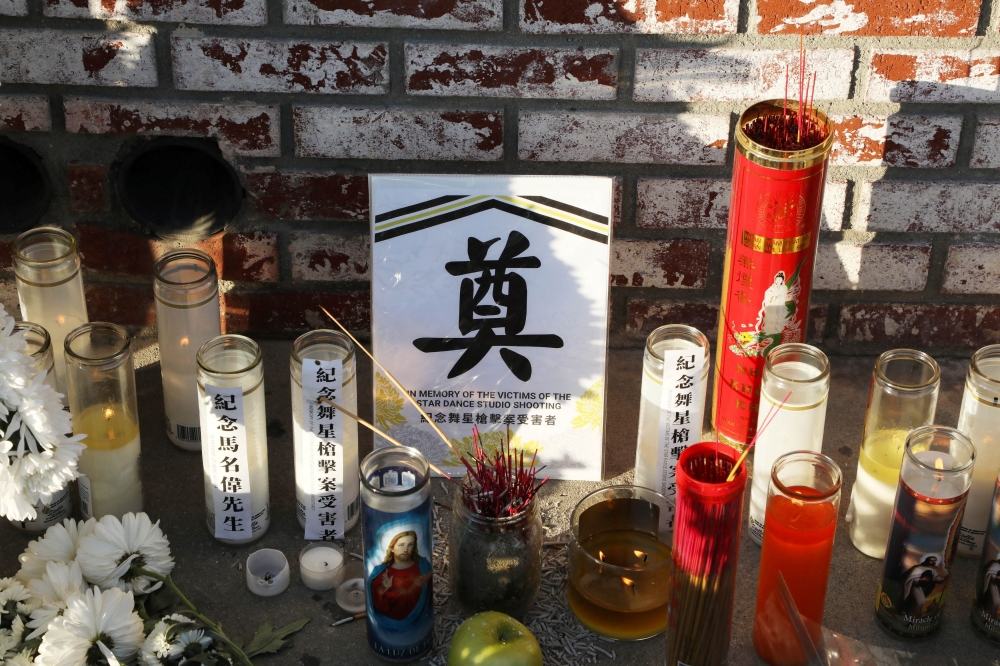 WASHINGTON, Jan 26 — Mass shootings in the United States have become agonisingly common, but the two recent incidents in California stand out for their difference: the alleged attackers were men of Asian descent, both elderly.

The typical profile for a shooting in a public space with a large number of casualties is a white male under 40 — and white men under 21 have featured particularly in some of the most recent.

But the man who is suspected of killing 11 people at a suburban Los Angeles dance hall on Saturday was 72-year-old Huu Can Tran, with apparent roots in Vietnam and China.

And the man who is accused of two days later shooting dead another seven people in Half Moon Bay, south of San Francisco, Chunli Zhao, is ethnic Chinese and 67 years old.

The suspects’ demographic details meant the two attacks drew more attention than usual in a country where mass shootings are now relatively common.

Both took place as many of the 20 million in the Asian American and Pacific Islanders community in the United States were celebrating the lunar new year.

The nonpartisan Violence Project says 79 per cent of mass shooters from 1966-2020 were under the age of 45, and just 6.4 per cent were Asian — roughly equivalent to their proportion of the US population.

A new report by the US Secret Service, which studied 173 violent attacks in public spaces over 2016-2020, said the average attacker age was 34, and that only 4 per cent were Asian.

“Lunar New Year marks an important cultural holiday for many Asian Americans and to have a day of celebration be upended by staggering violence leaves us heartbroken,” said the National Council of Asian Pacific Americans after the assaults.

In both attacks, the suspected perpetrators were familiar with the location and the victims, most of whom were fellow members of the Asian community in California.

Tran is alleged to have attacked a popular ballroom dance hall he had long attended, and Zhao is accused of targeting two farm businesses where he had reportedly worked.

Lina Alathari, head of the Secret Service’s National Threat Assessment Center, would not comment specifically on the two California attacks.

But neither stood out as especially unusual when weighed against the center’s study released Wednesday.

“Across the five-year timeframe and every year we’ve studied, by far grievances were the top motive for these attacks,” Alathari told reporters.

“These were attackers retaliating for some sort of perceived wrongs that may have been related to either personal issues, domestic situations with partners, as well as workplace issues,” she said of those in the study.

Attacks against workplaces and community halls are highly common, and in nearly half, attackers had an affiliation with the target.

And whatever ethnic group they are, generally they were lone actors, male, and armed with high-powered firearms.

“There is no community that’s immune from this,” Alathari told reporters.

“There’s no profile of the type of community. It’s occurred in communities (of) just a few hundred residents, as well as major metropolitan areas,” she said.

The deadliest mass shooting in US history, the October 2017 attack on an outdoor concert in Las Vegas, Nevada that left 61 dead and hundreds injured, remains mostly unexplained, and the shooter there was also older than average: He was white, 64, and his motives remain unknown.

The second most deadly, the massacre of 49 at an Orland, Florida gay nightclub in 2016, is better understood.

The 29-year-old alleged killer was supposedly radicalized by ideology from the so-called Islamic State group and specifically targeted the LGBTQ community.

But some of the most horrific recent attacks have been by very young white men, driven by racist ideologies.

The man who killed 23 in an El Paso, Texas supermarket parking lot in 2019 was 21 and espoused anti-Hispanic hate.

The 18-year-old white man who killed ten at a Buffalo, New York supermarket in May 2022 specifically targeted African Americans.

Alathari said that the only way to prevent such attacks is for communities, workplaces, schools and other groups to take note of people with worrisome behaviour and for them to be willing to investigate further.

A large percentage of mass attackers have already had previous run-ins with law enforcement, and half have histories of physical aggression and violence, including many who are domestic abusers, Alathari said.

“We see a lot of the same warning signs and behaviours that we really should be looking at when someone is eliciting concern,” she said.

To prevent attacks, “We really should set a low threshold for concerning behaviour, to make sure we’re asking the right questions, to see if that individual is escalating towards violence,” she said. — AFP