Skip to content
HomeWorldA letter to … my immigrant mother, a girl in Vietnam 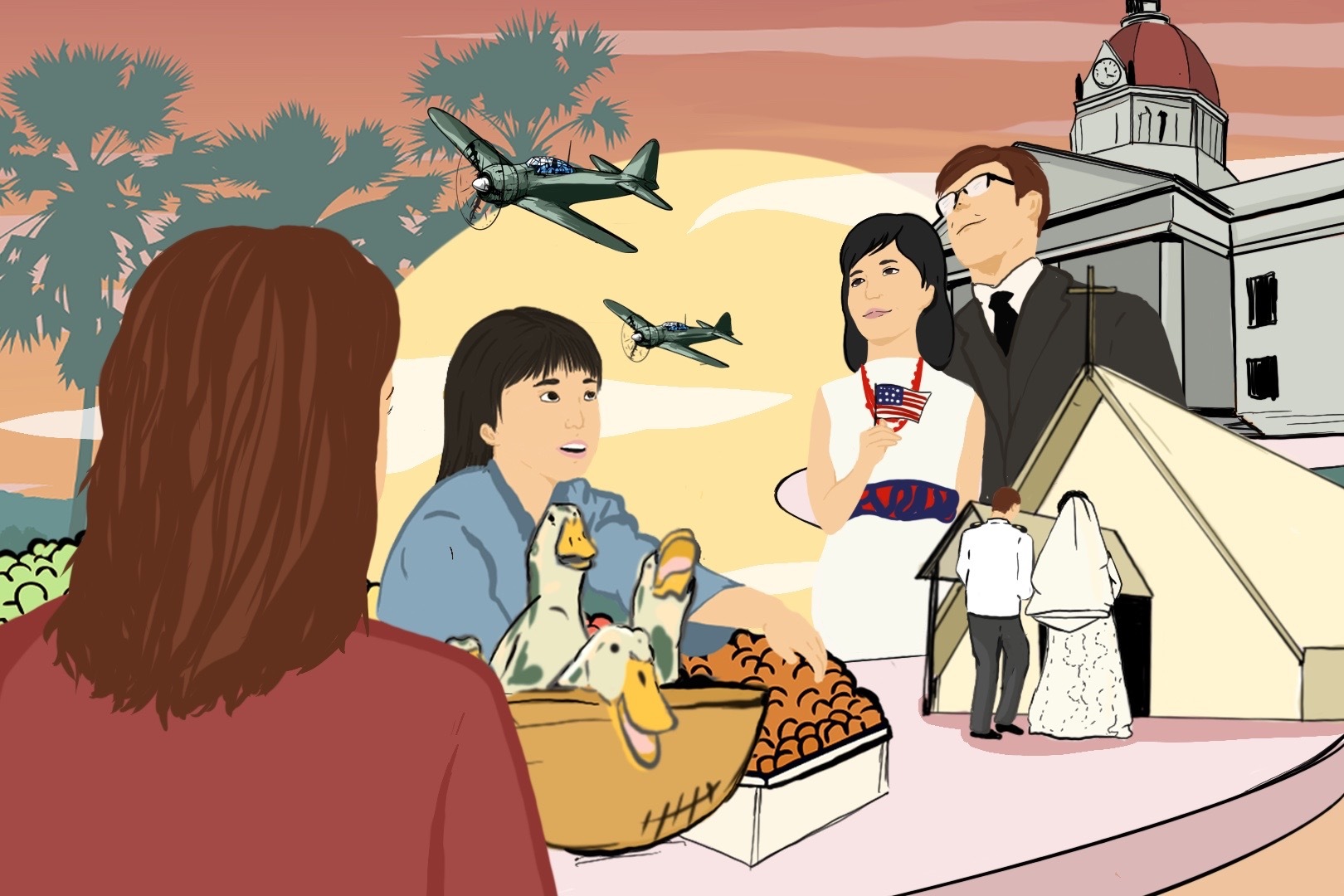 To the pre-teen girl selling ducks on the side of the road in Bien Hoa, I see you. You are sitting there in your too-small dress with your stepfather, the only father you have really known. You spent the morning with him, walking through the wetlands near your home to set the traps. You felt important and big, being taught grown-up things. What a thrill to find the ducks in the cage later, knowing the whole scheme worked. Now you sit with him, patient and quiet, as the ducks squawk and protest in their large woven basket, waiting to be chosen, plucked, cooked, and eaten.

You are waiting, too. You know the larger world is out there. It comes closer by the day. You have seen the people building the airbase nearby, the one that the French Air Force will use to fight the North Vietnamese in the ongoing Indochina War, the war they will later call the “first” because there are more conflicts to come. They picked the site because it was flat and accessible, and less than 40km (25 miles) from Saigon, the capital of South Vietnam. You do not know yet that, 10 years from now, you will be on a different military base in Okinawa, Japan, teaching Vietnamese to American soldiers, and that one of those soldiers will be my father. For now, you are content to spend your days selling ducks for cash, helping your mother cook in the kitchen of your small house, and teaching your younger sister to read.

You study hard at school, taking notes in small, delicate handwriting. When school lets out, you scramble up the banks of the Dong Nai River to watch the people crossing the bridge from Saigon to Bien Hoa. It is easy to daydream there, a welcome escape from all the talk, talk about war, in your house, at school, on the street. You are not sure what the future holds for you, your family, or your people, but the anxiety is rising in the humid air.

It grows dark and you go home, comforted by the sight of your mother rinsing rice in a pot, swirling the grains between her fingers. One day, many years from now, when you will be measuring the time since you left home in decades, you will teach me to do the same thing.

‘Always looking over your shoulder’

To the young woman in a traditional Vietnamese dress, standing in front of the class, I see you. You are away from home for the first time, a newly minted graduate of the University of Saigon. There, foreign languages came easily to you – you studied English, of course, but also French and Japanese. It is no wonder that, when the US Army came looking for someone to teach in its Vietnamese language school, they chose you. Now you are standing in front of a nondescript classroom on base in Okinawa, facing down a group of wide-eyed, wisecracking men, all of them even further from home than you are. You take a new name – Rosette – one that is feminine, you think, and easy to pronounce, an identity you can put on and take off like a cloak.

It is 1965. The war is intensifying, and casualties are mounting. Back home, it seemed to come closer and closer. In November 1964, the North Vietnamese army unleashed an attack on the Bien Hoa airbase, killing four Americans and two Vietnamese, and destroying dozens of planes and materiel. North Vietnamese propaganda placed the casualties far higher, into the hundreds. Your mother and stepfather wanted you to get out. They knew that a girl with your brain could make it. You don’t feel like you have much of a choice.

So when a tall, green-eyed soldier from Wisconsin offers you a ride home after class, you accept. He is a good student, asks a lot of questions, works hard at pronunciation. When he asks you again, you accept again. When he gets transferred away from Okinawa to Vietnam, you agree to correspond in English, for his sake, although he tries to throw in a few Vietnamese words, too. After a few months, you sign your letters “Love, Rosette”. When his tour comes to an end and he proposes, the answer is obvious. You get married in a beaded white dress at the chapel on base. You go home to Bien Hoa while he readies a house in the United States. Then he sends for you, and you say goodbye to Vietnam for good.

You leave home a bride, not a refugee, not one of the thousands who will flee by helicopter, plane, and boat after Saigon capitulates in April 1975. Your farewell to the family who raised you is not rushed. You are not under fire. You are privileged to be able to pack a bag with your makeup and favourite dresses and books. But, for you, the leaving is not without trauma. You will carry a deep sense of anxiety and loss with you for the rest of your life, always looking over your shoulder. Always wondering when the next bad thing will happen.

One day, a couple of years after the wedding, you will stand on the steps of a big American courthouse, waving a tiny American flag while a photographer takes your picture. A neighbour is at home, watching your infant daughter, born just six months before, while you are naturalised as a US citizen. It will take a long time for that little girl to understand the pain you experienced leaving Vietnam and the emotional costs of becoming American. You watch your homeland crumple in defeat from a great distance, helpless to do anything. You feel something like survivor’s guilt. When I ask you, years later, if you would ever go back, you shake your head and say, “Too sad.”

‘The future is not promised’

To the woman who helped raise me, I see you, tucking grey hair behind your ears, walking more slowly, but still making your favourite chicken curry or lemon grass beef whenever we get together. When I was younger and understood less, we did not get along so well. Now, it is better. I am aware that the time grows shorter, and that the future is not promised, something you understood a long time ago.

I call you on the Lunar New Year to see how you are celebrating. You tell me you were pleased with the price of the duck you got at your favourite Asian market, and that you made duck soup, for good luck.