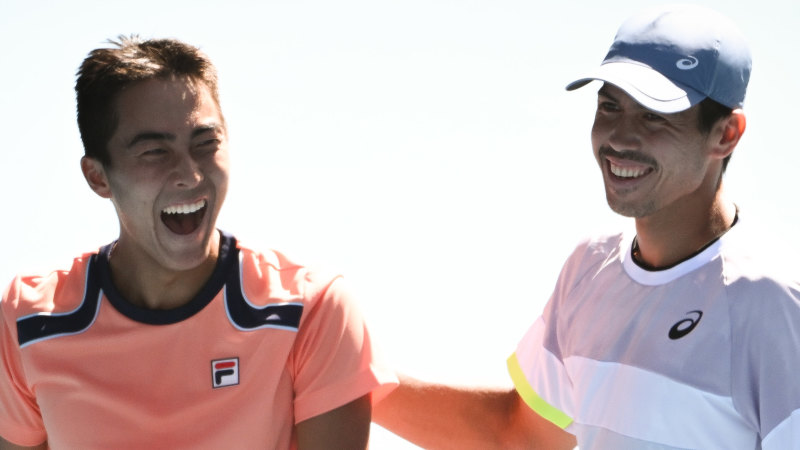 The 21-year-old approached Kubler about six months ago to see if he would play with him at the Australian Open, almost a decade after the then-wannabe pro wandered down to the North Shore Open to watch his future doubles partner in action.

Kubler, now 29, was fresh off being the best junior in the world at that stage and had the tennis world at his feet, not knowing all the challenges, particularly with his knees, he would face in the coming years.

He made the mixed doubles final with fellow Australian Jaimee Fourlis in 2022, but hopes to go one better and win the title this time around.

“Just the thought that we could, maybe, win is pretty surreal, to be honest,” Kubler said.

“It’s good that we’ve got a day off in between, just so we can probably enjoy this moment a little better and then refocus … but, also, I’m super pumped now for what the future holds.

“Our rankings go up a fair bit now, and we can actually play the other slams together. It’s great that what we are doing here, but now we can look to Roland Garros, to Wimbledon, to US Open, to even Aussie Open next year now.

“There is a new team forming. That’s probably what I’m more excited for.”

The result caps Kubler’s incredible career resurgence, which includes reaching the last 16 in singles at Wimbledon last year and reaching a career-high ranking of No.84.

Hijikata has had a whirlwind few months, himself, winning a set off Rafael Nadal at the US Open last year.

“It’s been a roller coaster of a year,” Hijikata said.

“I think this time last year I was still tossing up whether to go back to college or not. I think I have, maybe, made the right call going on the tour.”