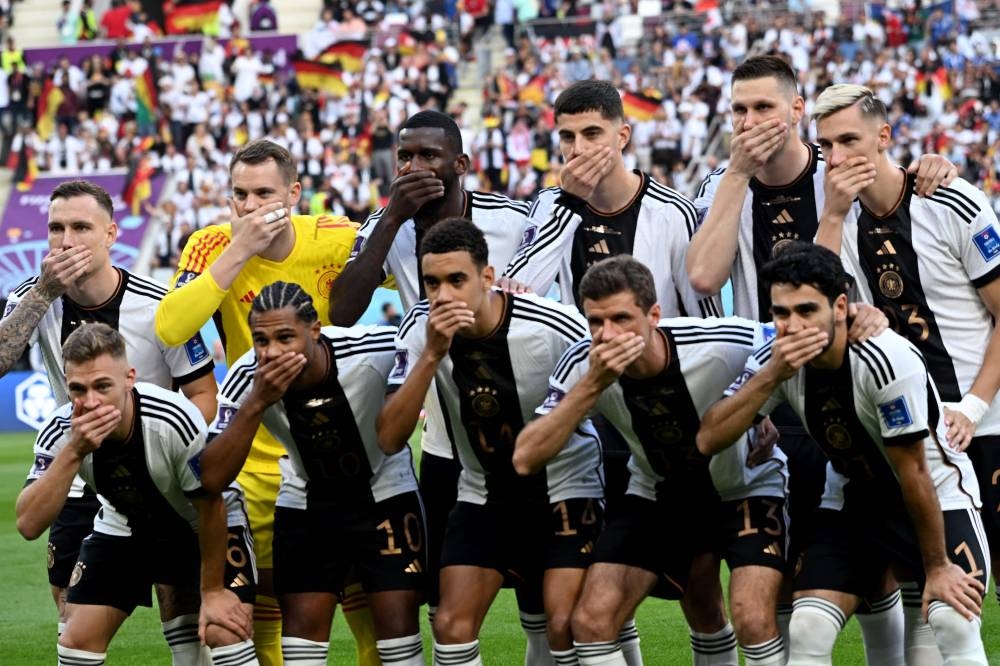 DOHA, Nov 23 — Germany’s players covered their mouths for the team photo before their World Cup opener against Japan today in protest at Fifa’s refusal to allow rainbow-themed armbands.

Captains of seven European teams had planned to wear the anti-discrimination armbands during the tournament in Qatar as part of a campaign for diversity.

But they backed down over the threat of disciplinary action from football’s governing body, including yellow cards.

The rainbow armbands had been viewed as a symbolic protest against laws in Qatar, where homosexuality is illegal.

Germany’s football federation tweeted in English moments after the photo protest: “It wasn’t about making a political statement — human rights are non-negotiable.

“Denying us the armband is the same as denying us a voice. We stand by our position.”

German Interior Minister Nancy Faeser did wear the “OneLove” armband as she watched the game sitting next to Fifa president Gianni Infantino at the Khalifa International Stadium in Doha.

She said Fifa’s ban was a “huge mistake”.

Not only players, but fans should also be allowed to show pro-LGBTQ symbols “openly”, Faeser told reporters in Qatar.

Supporters should “make a decision for themselves” about whether they wanted to wear the symbols, Faeser added.

The German government spokesman, Steffen Hebestreit, said earlier in the day in Berlin that Fifa’s decision to bar captains from wearing the “OneLove” armbands was “very unfortunate”.

“The rights of LGBTQ people are non-negotiable,” Hebestreit said at a regular press conference.

Underlining tensions at the tournament over the issue, Belgium’s Jan Vertonghen said yesterday that he was “afraid” to talk about human rights.

Vertonghen, speaking on the eve of Belgium’s opening game against Canada later today, said he did not feel comfortable.

“I’m afraid if I say something about this I might not be able to play tomorrow,” the defender said.

“It’s an experience I’ve never felt in football before. I feel controlled. I’m afraid to even say something about this.

“We’re just saying normal things about racism and discrimination and if you can’t even say things about it,that says it all.

“I want to appear on the pitch tomorrow, so I’ll leave it at that.” — AFP