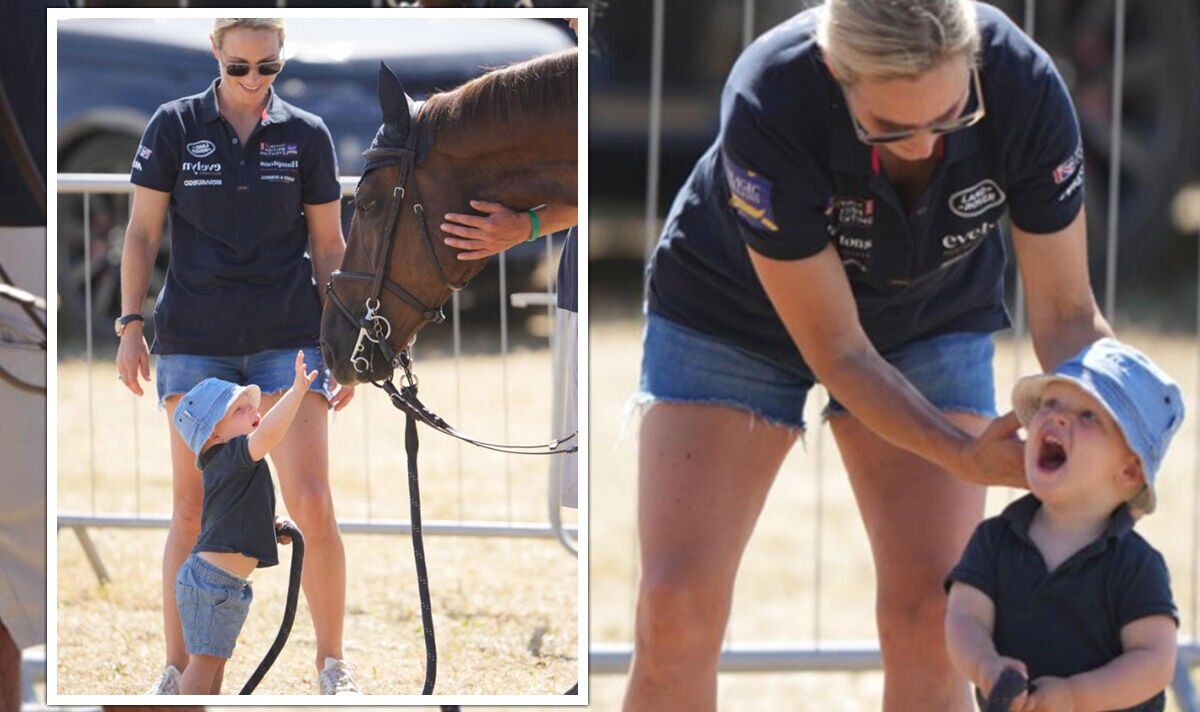 The Queen’s granddaughter was spotted on the third day of the Magic Millions Festival of British Eventing at Gatcombe Park, Gloucestershire. The sprawling countryside estate is the home for many members of Princess Anne’s immediate family.

Zara, Mike, and the couple’s three children have made their home on the Cotswold estate.

Zara, a former Olympic equestrian, was seen playing with her and husband Mike Tindall’s youngest son, close to a beautiful brown horse.

Young Lucas, one, looked ecstatic to cling onto the horse’s reins, reaching up to touch the animal’s nose.

The mother and son were dressed in matching outfits of navy polo tops and light blue shorts.

Zara also popped a matching blue sunhat on the youngster’s head to protect him from the August sun.

This weekend marks the first celebration of the equestrian festival since 2019, according to the event’s website.

The organisers called the event “a true showcase of the sport, from grassroots to the elite level”.

Lucas was born back in March 2021, and made his debut royal appearance at the Queen’s Platinum Jubilee celebrations in June.

Former rugby union player Mike revealed on his ‘The Good, The Bad, and The Rugby’ podcast that Lucas was born so quickly Zara did not have the chance to get to the hospital.

“Didn’t make it to hospital. On the bathroom floor.”

He added: “So yeah, it was running to the gym, get a mat, get into the bathroom, get the mat on the floor, towels down, brace, brace, brace.”

Zara, who won a silver medal at the 2012 Olympic Games as part of Team GB’s equestrian eventing team, is sure to be delighted with Lucas’ apparent early interest in horses.

The youngster’s grandmother, Princess Anne, was also a keen equestrian from her youth, and was the first member of the Royal Family to compete in the Olympic Games.

She competed at the Montreal games in 1976, riding the Queen’s horse, Goodwill.

She has maintained her interest in elite competition, becoming the president of the British Olympic Association.

The Queen, 96, has long held her own love for horses, having picked up the hobby at just three years old.

To mark the monarch’s birthday in April, the Palace released a new photo of the Queen alongside two fell ponies.