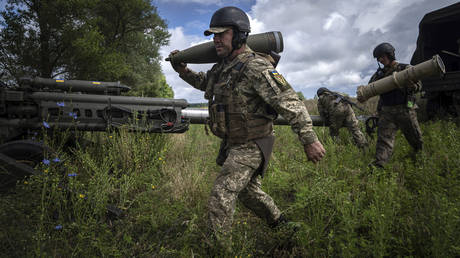 The Pentagon plans to boost manufacturing of 155mm artillery shells sixfold within the next two years
The US Department of Defense is reportedly planning to undergo its most “aggressive modernization effort” in nearly 40 years, according to an army report seen by the New York Times, as the Pentagon aims to boost weapons production for Ukraine.The effort will apparently include the expansion of factories and the engagement of new producers in order to achieve a 500% boost in artillery shell production within two years, the outlet claims. It’s noted that such a move would push conventional ammunition production to levels not seen since the Korean War in the early 1950s.Before Russia launched its ongoing military operation in Ukraine in late February last year, the US Army was producing some 14,400 artillery shells a month, according to the NYT. However, with Kiev demanding more weapons and munitions from Washington and its allies, the Pentagon tripled production goals last September and then doubled them in January, and is now producing as many as 90,000 shells per month.The outlet goes on to state that the Department of Defense intends to spend roughly $1 billion a year for the next 15 years to modernize government-owned ordnance production facilities, increasing automation and the capacity to produce munitions more quickly.“In previous conflicts, we had stockpiles that were sufficient for the conflict,” the army’s top acquisition official, Douglas R. Bushin, told the NYT. “In this case, we’re seeking to increase production to both maintain our stockpile for some other contingency but also supply an ally.”

CNN has also reported that the Biden administration was “finalizing” plans to send “a significant number” of M1 Abrams tanks to Kiev. Reuters has also claimed that the US may be preparing to send “dozens” of Abrams tanks to Kiev, but noted the process could take months, if not years.Russia, meanwhile, has continued to insist that the deliveries of Western weapons to Ukraine only serves to prolong the conflict and will ultimately fail to have a significant effect on its outcome. As for the delivery of US tanks, Russian Ambassador to the US Anatoly Antonov has stated that such a move would constitute a “blatant provocation” against Moscow and warned that the tanks, as well as any other NATO military equipment sent to Ukraine, “without any doubt will be destroyed.”
You can share this story on social media:
Follow RT on