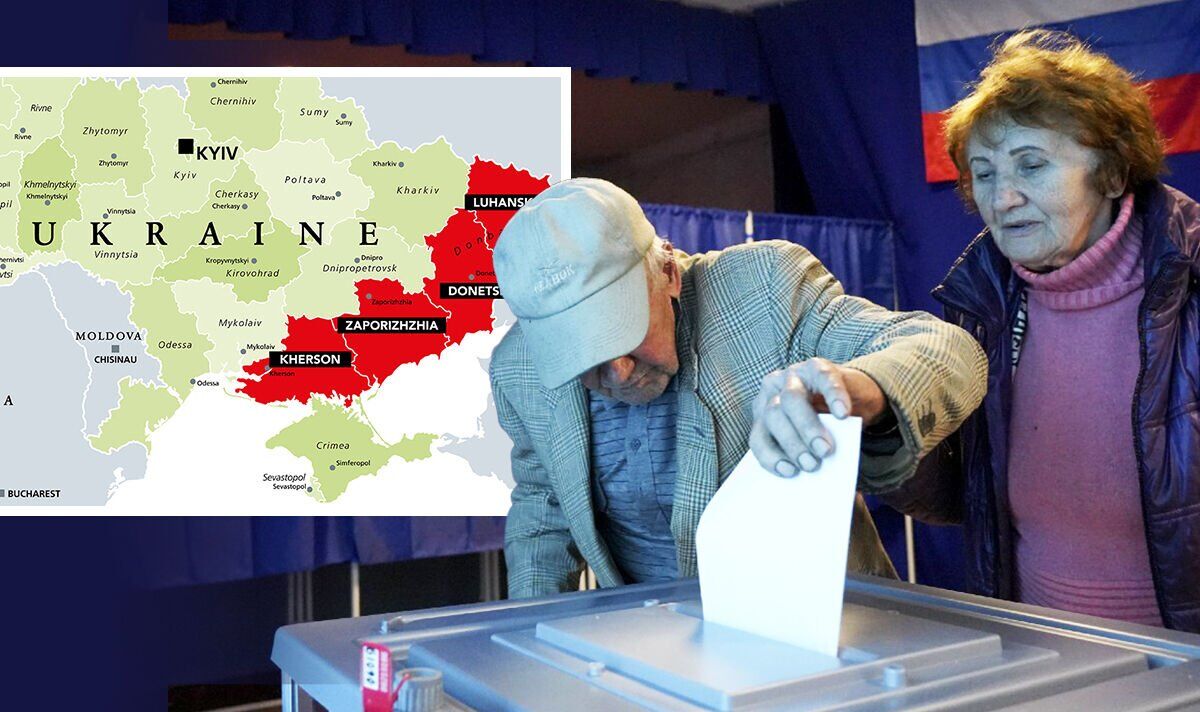 Vladimir Putin will proclaim the annexation of four Ukrainian regions today (September 30) in an escalation of his seven-month long war and taking the conflict into an unpredictable new phase. Eight years after Russia seized Crimea from Ukraine, following an invasion and a similar vote, Putin will annex the Donetsk, Luhansk, Zaporizhzhia and Kherson regions.

Kyiv and its Western allies have condemned the referendums as rigged and illegal.

She said in a statement: “Vladimir Putin has, once again, acted in violation of international law with clear disregard for the lives of the Ukrainian people he claims to represent.

“The UK will never ignore the sovereign will of those people and we will never accept the regions of Donetsk, Luhansk, Kherson and Zaporizhzhia as anything other than Ukrainian territory.

“Putin cannot be allowed to alter international borders using brute force. We will ensure he loses this illegal war.”

The four regions to be annexed cover some 90,000 square km, or about 15 percent of Ukraine’s total area – roughly the size of Hungary or Portugal.

Mikhailo Podolyak, President Volodymyr Zelensky’s adviser, told Italian daily La Repubblica: “Referendums have no legal value, under international law the regions are and remain territories of Ukraine and Ukraine is ready to do anything to take them back.

“They were sham votes, in which few people participated. To those who went to vote they pointed their rifles in their faces ordering, ‘Vote!’.”

The annexation ceremony will take place in the Georgievsky Hall of the Great Kremlin Palace. It will be followed by a concert in Moscow’s Red Square.

Kremlin spokesman Dmitry Peskov did not say whether Putin would attend the concert, as he did a similar event in 2014 after Russia proclaimed it had annexed Ukraine’s Crimea region.

A stage has been set up in Red Square with giant video screens and billboards proclaiming the four areas part of Russia.

Mr Biden said at a conference of Pacific Island leaders on Thursday: “The results were manufactured in Moscow.”

UN Secretary General Guterres told reporters: “Any decision to proceed with the annexation … would have no legal value and deserves to be condemned.”

Washington and Brussels are set to impose extra sanctions on Russia over the annexation.

Some of Russia’s close allies, such as Serbia and Kazakhstan, say they will not recognise the take over.

Russia is billing the annexations as a celebration.

They come after Russia faced its worst setbacks in the seven-month-old war, with its forces routed in Ukraine’s northeast Kharkiv region.

Some military experts say Kyiv is poised to deliver another major defeat, encircling the town of Lyman, which is Russia’s main, remaining bastion in the northern part of Donetsk province.

Its capture would open the way into the Luhansk region.