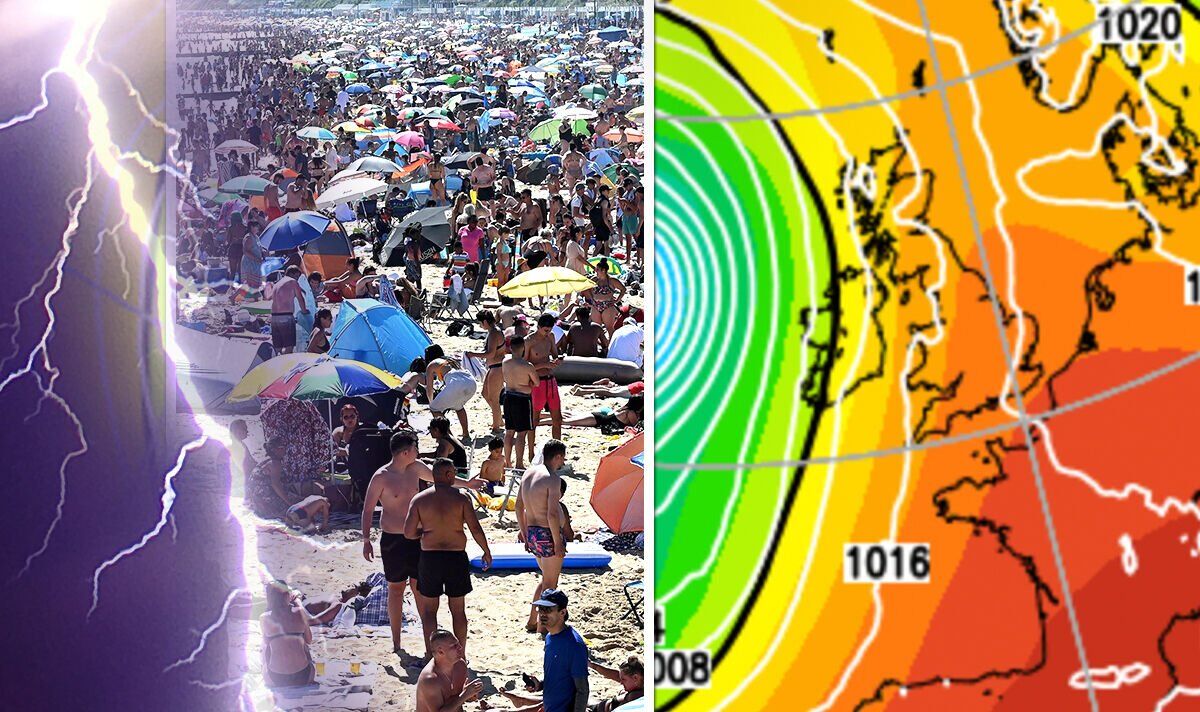 Unstable, moisture-laden tropical air sweeping in from the south will plunge the UK into a steamy mini heatwave. Thermometers will rocket hitting a peak towards the middle of next week when the mercury could touch the high-20Cs. However, fine settled weather will erupt into explosive thunderstorms lasting through next week, forecasters warn.

John Hammond, meteorologist for Weathertrending, said: “Even this weekend, thundery showers may drift up from France into some southern and central areas.

“In the brighter spells, temperatures could shoot up into the mid-20Cs early in the new week, and further cloud and potentially heavy rain are likely to pulse erratically northwards across the UK over the next few days.

“Amounts will vary but the potential is there for a lot of rain in some places.”

Britons are warned to keep up with weather forecasts before making plans for the weekend.

Southern regions are first in the firing line for thunderstorms tonight, according to the Met Office.

Meteorologist Alex Deakin said: “Things are warming up for the weekend but although there will be some sunshine on Saturday there will also be some thunderstorms.

“Some pretty warm and humid air is drifting up across France, and that is likely to spark some heavy thundery showers that may well drift northwards on Saturday night and still be across some parts of England and Wales on Sunday.

“Sunday will be a warn humid day with the risk of heavy thundery showers.

“Between the showers there will be some breaks in the cloud and some sunshine, and temperatures could get into the mid-20Cs.

“If you have weather-dependant plans on Sunday, keep up to date with the forecasts.”

The tropical plume, which will swathe the nation through next week, will be pulled up from North Africa and the Continent by a huge high-pressure system stretching across the Atlantic.

Temperatures will peak across south-eastern Britain during the middle of next week, according to forecasters.

Jim Dale, meteorologist for British Weather Services, said: “Temperatures will start to pick up at the weekend as warm air comes in from the Continent and North Africa.

“We are looking at highs in the mid-20Cs or even higher during the start of next week, with the peak expected around Tuesday or Wednesday.

“We will have to watch out for thunderstorms during this period, and there might be some scattered storms starting to pop up at the start of the weekend.”

Thundery outbreaks threaten to persist through next week as sultry temperatures destabilise the atmosphere.

Met Office meteorologist Aidan McGivern said: “Through next week we expect above-average temperatures, the mid- to high-20Cs is possible at times mainly towards the south-east if we see sunshine with this plume.

“But with those high temperatures we could see showers or thunderstorms breaking out.

“It will be warm or perhaps very warm next week, and at times there will be outbreaks of rain.”

Bookmaker Ladbrokes has slashed the odds on late spring rainfall offering 3-1 from 8-1 on next week bringing the wettest day of the year.

Spokesman Alex Apati said: “Temperatures are on the up at long last, but that won’t stop record-breaking rain for the year potentially coming next week, if the latest odds are anything to go by.”

Coral is still hedging bets on a scorching summer offering 4-5 from 2-1 on this year melting the record books.

Spokesman John Hill said: “We now make it odds-on for the UK to have a record hot summer this year.