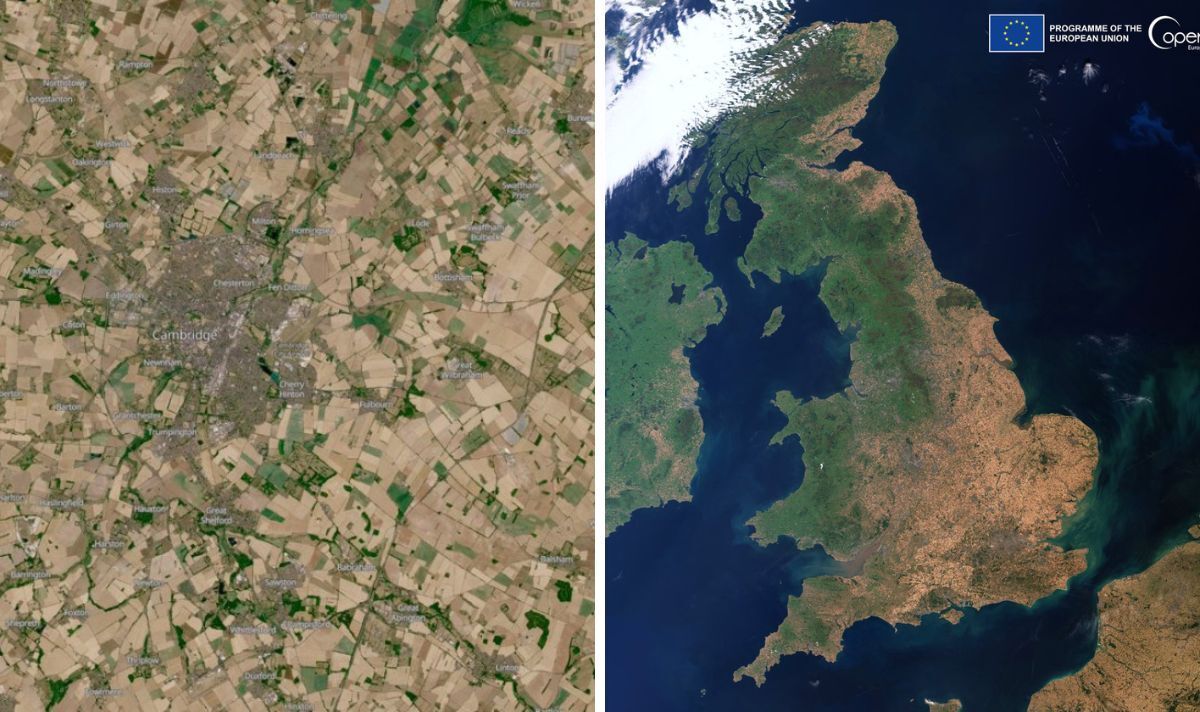 The UK is baking in another heatwave as drought could be declared for some parts of England tomorrow. A satellite image taken on Wednesday by Copernicus, the EU’s Earth Observation Programme, shows swathes of the country have turned from green to brown amid the scorching conditions.

“The worrisome dryness of vegetation caused by the ongoing drought is clearly visible in the eastern part of Great Britain.”

Another post shows the difference between two satellite pictures of Cambridge in August 2021 and 2022.

The caption said: “UK is not spared from drought. The effects of the lack of rain are visible when comparing the Copernicus Sentinel-2 images of the area around Cambridge of 11 August 2021 and 8 August 2022.”

It comes as an amber warning for extreme heat has been issued by the Met Office for much of England and Wales.

The mercury is set to soar to as high as 34C today and up to a peak of 36C over the weekend in the areas covered by the alert.

Meanwhile, in northern England and Scotland temperatures are expected to be in the high 20s or even low 30s in some spots.

There is also a heat health alert in place from the UK Health Security Agency, with experts advising people to look out for those who are older or with existing health conditions, as well as young children.

It also comes after months of low rainfall leaving the ground parched and at risk of wildfires breaking out.

The Met Office’s fire severity index (FSI), an assessment of how severe a fire could become if one were to start, is very high for most of England and Wales, and will reach “exceptional” – the highest level – for a swathe of England stretching to the border with Wales by the weekend.

In London, fire chiefs are urging people not to barbecue in open spaces or balconies, to put out their cigarettes properly and dispose of rubbish correctly.

London Fire Brigade said its control room had sent firefighters to deal with 340 grass, rubbish and open land fires during the first week of August – an eightfold increase on the 42 during the same week last year.

Meanwhile, the latest hosepipe ban came into force on Friday for households in Kent and Sussex.

Southern Water has already implemented a ban for customers in Hampshire and the Isle of Wight.

Thames Water, which supplies 15 million customers in London and the Thames Valley, has said it will bring in one in the coming weeks.