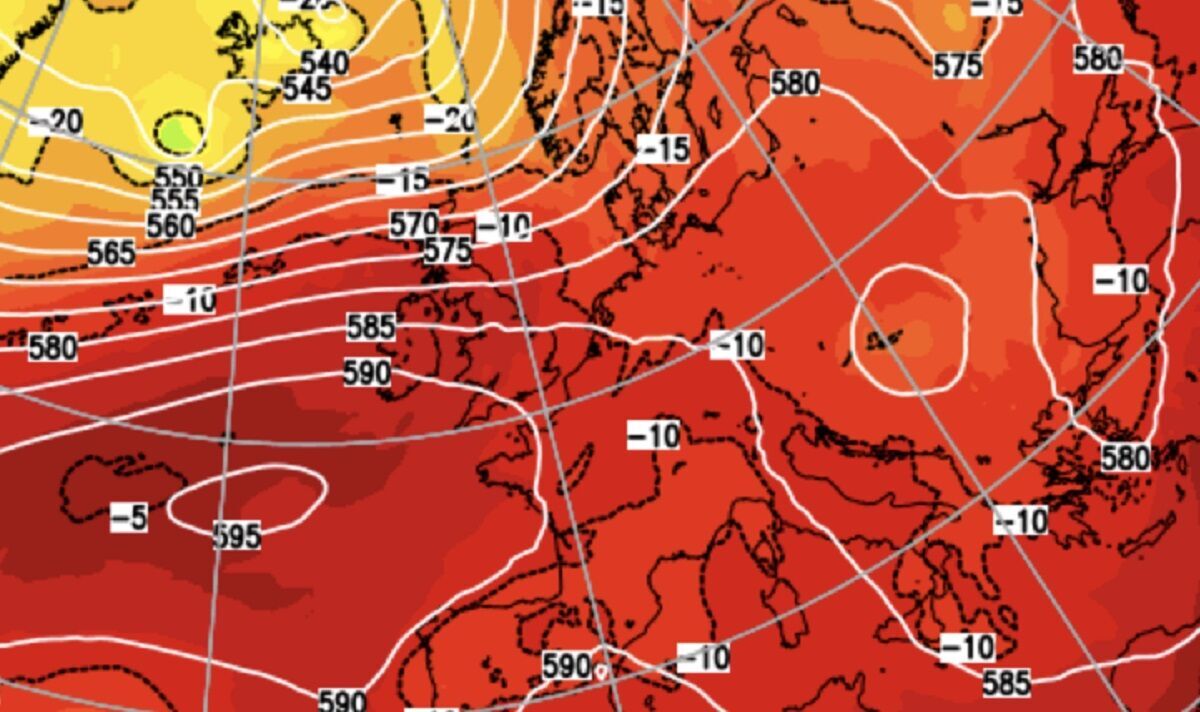 Health officials have re-issued a ‘heat-health’ alert across southern England ahead of temperatures breaching ‘dangerous’ thresholds next week. Soaring mercury will once again be driven by the Azores High, the high-pressure system–‘anticyclone’–behind last month’s record-melting 40.3C fire blast.

Thermometers will rise ‘day-on-day’ before peaking ahead of next weekend in the mid-30Cs, while ground temperatures sizzle to 45C.

Met Office meteorologist Alex Deakin said: “High pressure is set to build its way in across the UK, and this high will continue to bring dry weather and with sunny spells by day temperatures will start to pick up as we go through the weekend.

“There are strong signals that high pressure will dominate through most of next week but the position of the high will be crucial to see just how high the temperatures will get.”

The Azores High will be strengthened by the jet stream sweeping over Scotland and batting unsettled low-pressure systems off to the north, he explained.

He said: “There is not a lot to shift that high pressure.

“Temperatures will rise day on day.”

As Britain’s flaming summer smoulders on, experts warn of no relief for swathes of the country desperate for rain.

As hosepipe bans loom, Scotland and northern Britain may get some showers as the desert south continues to parch.

Jim Dale, meteorologist for British Weather Services, said: “The south and the southeast will see the highest temperatures over the next week, and here we could see highs of around 34C by Thursday.

“Scotland and the north, while still warmer than average, will get some fresher spells, and also more of a chance of rain.

“However, for the south, which is desperate for rain, there is nothing in the forecast next week or through to the final third of the month.”
While the heat will be driven by the same feature which pushed temperatures in Coningsby, Lincolnshire, to a record 40.3C last month, a repeat is unlikely, he added.

But hot weather is heading back, as the Azores High surges across the Atlantic before fracturing to create a separate high which will smother Britain, he warned.

He said: “The Azores High is heading back to the UK, and it is this feature which will determine just how hot it gets.

“It will dislocate over the UK forming an independent region of high pressure, and this will strengthen the sunshine.

“But it is important to remember that it is slightly different from last time because it is later in the year, and so the heat will not build to the same extent.

“While we are expecting hot weather, I would be shocked to see 40C again.”

Weather models reveal the mercury hitting the mid-20Cs in the south today before lifting into the high-20Cs tomorrow.

A fresher breeze will keep Scotland and northern England in the high-teens to the low-20Cs into the start of next week.

Thermometers will rise steadily through next week hitting the mid-30Cs in parts ahead of next weekend.

Blazing sunshine will push ground temperatures across the far south to a sizzling 45C.

Experts warn dry conditions and above-average temperatures could hold out past the middle of August.

“This could push maximum temperatures into the mid- to high-30Cs in parts of the south, and further north should even see temperatures potentially approaching or exceeding 30C.

The Met Office with the UK Health Security Agency (UKHSA) has issued a level-2 ‘alert and readiness’ heatwave warnings between next Tuesday and Friday.

It states: “Temperatures are expected to steadily rise, becoming warm or very warm across much of the country and potentially hot across the central southern England. “It is likely that the trigger alert criteria will be reached in this area from Tuesday, with a moderate risk elsewhere.

“Hot weather can be dangerous, especially for the very young or very old or those with chronic disease.”

As the mercury starts to boil, bookies Ladbrokes has slashed the odds from 1-2 to 1-3 on 2020 recording the hottest August on record.

Spokesman Alex Apati said: “It’s looking increasingly likely even more record-breaking temperatures are on the cards over the coming weeks.”