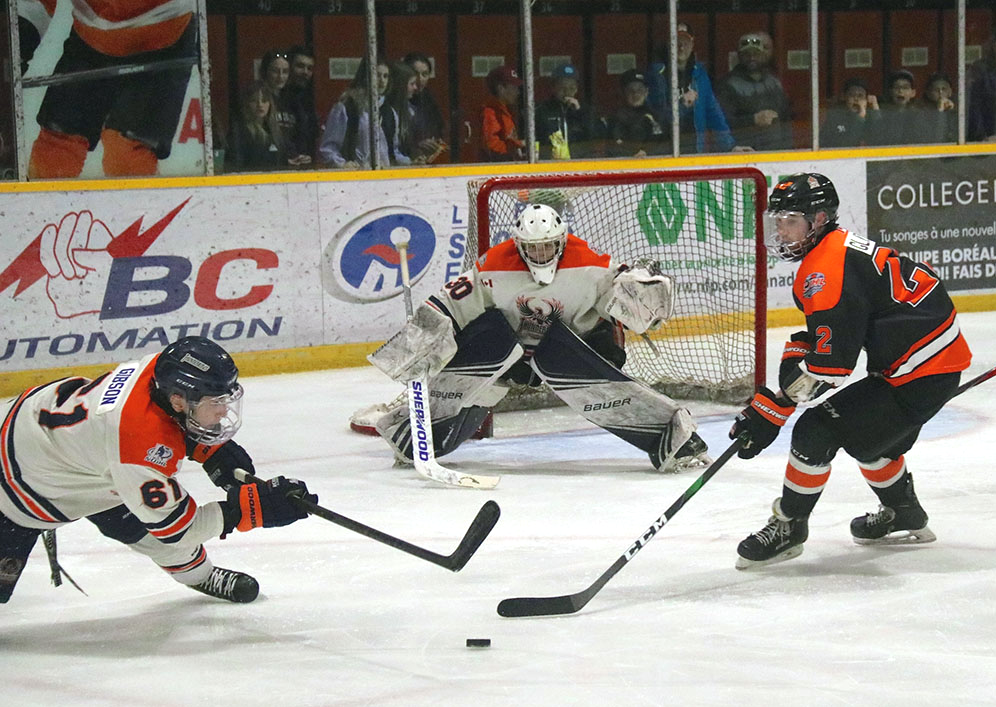 Though things may have looked bleak through the opening three games, the Soo Thunderbirds are one win away from capturing a Northern Ontario Junior Hockey League title.

After dropping the opening three games of the series, the Thunderbirds beat the Hearst Lumberjacks 4-3 in overtime on Thursday night to force a seventh, and deciding game, with a spot in the Centennial Cup on the line.

Russell Oldham deflected a point shot from Zane Burleigh past Hearst goaltender Liam Oxner at 6:11 of the first overtime period to give the Thunderbirds the victory at Claude Larose Arena.

The winner came after the Lumberjacks battled back to force the extra frame with three goals in the third period.

After a scoreless opening period, the Thunderbirds got on the board with a pair of goals in the second period.

Kyle Trottier opened the scoring 1:59 into the frame when he took a pass in the slot from Brock Santa Maria on the right win and beat Oxner stick side through traffic.

Santa Maria then gave the visitors a two-goal lead just over three minutes later. The Thunderbirds captain took a pass in the slot from Dharan Cap and beat Oxner stick side to make it 2-0.

Hearst pulled to within one early in the third period when Robbie Rutledge deflected a point shot by Dylan Ford pas Thunderbirds goaltender Noah Metivier 1:34 into the stanza.

Just 2:14 later, Rutledge got his second of the night after taking a Thunderbirds turnover in the slot and beating Metivier stick side to tie the game at two.

Zane Burleigh gave the Thunderbirds a 3-2 lead at 7:24 when he beat Oxner with a shot from the left point through a screen, but Tyren Grimsdale would tie the game at three when he scored on a rebound in close after Metivier stopped Zachary Demers from the right circle initially at 12:38.

Santa Maria finished the night with a goal and an assist for the Sault.

Metivier finished the night with 33 saves for the Thunderbirds while Oxner stopped 22 at the other end for Hearst.

Rutledge had two goals and an assist for Hearst while Demers assisted on a pair of goals.

The winner of that game will represent the NOJHL at the Centennial Cup national championship later this month in Estevan, Sask.