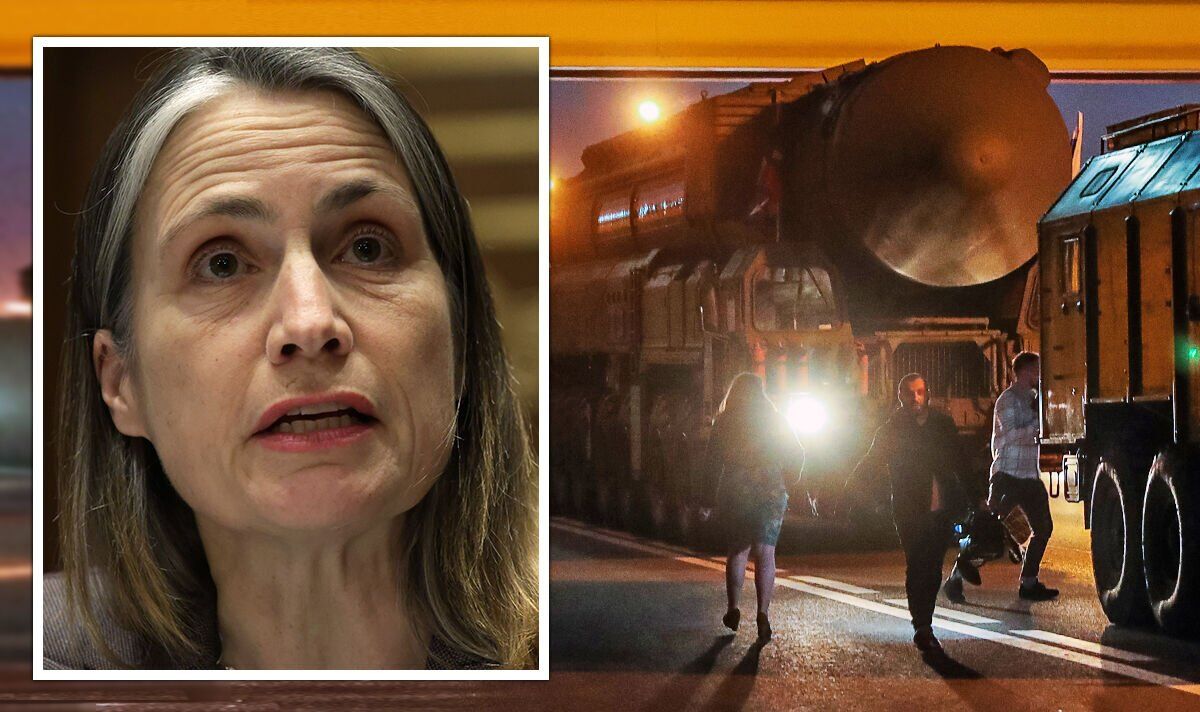 Putin has repeatedly issued veiled nuclear threats as a deterrent to the West’s ongoing efforts to deliver weapons to Ukraine. It comes amid major military setback in the northern Kiev region, while troops launch continued offensives in the Donbas region. This week, Putin and his defence secretary again threatened World War 3 – and possibly a nuclear war – if the West kept supplying Ukraine with weapons. Fiona Hill, a former senior director for Europe and Russia at the US National Security Council, says Putin and his foreign minister’s repeated nuclear threats are proof Putin is “scared”.

Speaking to Sky News’ Beth Rigby, she said: “For Putin right now, this is a game even though it’s a dangerous one, nonetheless because he’s scared.

“He’s scared of being usurped; he’s scared that he doesn’t have sufficient conventional power.

“He’s scared that we (the West) could indeed push him back. He’s scared Ukraine would win.”

Ms Hill continued: “So, this is basically the act of a scared person himself. He doesn’t say he is because he has to portray this strength and power. But he’s falling back on his nuclear power systems.

“We have to understand where he’s coming from, and we have to push back against that. The whole secret of this is, don’t be scared and intimidated. But take some action.”

When he launched the invasion of Ukraine on February 24, Putin said he was “conducting a special military operation” aimed at restoring peace in Ukraine’s eastern region of Donbas.

The Donbas has seen fighting involving Ukrainian forces against Russian-backed separatists since 2014. In his speech, Putin said NATO’s “unacceptable”, eastward expansion left him no other choice but to respond. He also justified the offensive as a means to “de-nazify” Ukraine and defend Russians in the Donbas republics of Donetsk and Luhansk.

About the possibility of Putin deploying the nuclear weapon, she said: “I don’t know, and I think he’s thinking about how we could use it.

“You know, as a demonstration effect, he’s already used it because he’s talking about it.

However, Putin’s toppling remains “entirely possible”, she says, but she admits she doesn’t have “a crystal ball”. History has shown that some dictators remained in power long after attempted coups and despite political opposition.

”I mentioned Bashar al-Assad in Syria. We said Bashar should be gone in what – was it in 2012? Ten years on, he’s still there.

“Robert Mugabe, we said there’s no way he could keep on going in Zimbabwe. So much, you know, pushback against him. But he just goes and dies in this position.

“We’ve still got Nicolas Maduro in Venezuela, we’ve got the Castros one after another in Cuba. You know, every time people said: oh surely, this must be the end.”

Ms Hill added: “But there could be a change. Something unexpected can always happen.

“It’s entirely possible that – but again, I can’t say in what kind of timeframe – that pressure builds up because of the massive losses in the military, there’s a backlash again from soldiers and their families that people around start to put blame where it’s due, which is on Putin and the tiny cutcherry of people who’ve made these decisions say, look, we’ve got to stop this but we can’t stop this with him there.”