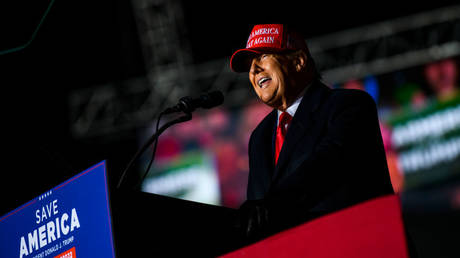 The former president’s advisers are reportedly preparing to launch his presidential campaign on November 14
Former president Donald Trump reportedly aims to announce his entry into the 2024 presidential race later this month, when he expects Republicans to be in a celebratory mood after retaking control of Congress in next week’s midterm elections.Trump’s “inner circle” is targeting November 14 as the date to unveil his bid to retake the presidency, Axios reported on Friday, citing unidentified people familiar with the discussions. The planning talks have escalated to the point where Trump allies are reportedly marking off dates on their calendars and booking their travel arrangements.The announcement will be followed by a series of political events to promote Trump’s campaign, according to Axios. A Trump spokesman declined to comment on the plans. They still haven’t been finalized and the timing could be pushed back based on the results of the congressional midterms, according to the media outlet.Trump and his allies have hinted in recent weeks that his 2024 campaign announcement is imminent, but they haven’t publicly disclosed a date. His former campaign manager, Kellyanne Conway, told reporters that Trump had held back on launching his bid to avoid taking attention away from congressional candidates in the November 8 midterms. “I think you can expect him to announce [it] soon.”