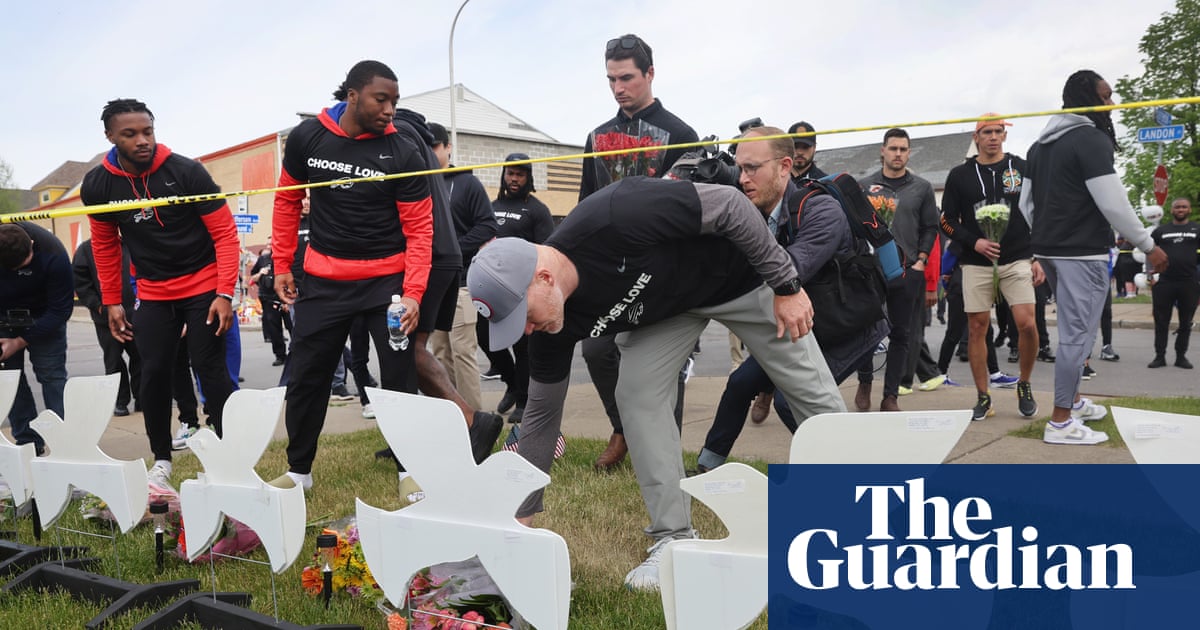 The man accused of killing 10 Black people in a racist attack at a supermarket in Buffalo, New York, at the weekend was called a coward by a loved one of one of the victims when he made a fresh appearance in court on Thursday.

Payton Gendron, 18, who is white, was not required to speak – his court-appointed lawyer had already entered a plea of not guilty to one count of first-degree murder – but it was the first time families of the victims who had come to the courthouse came face to face with him.

“Peyton, you’re a coward,” shouted one, as Gendron, who was shackled and dressed in orange Erie county jail clothes, was led out of court to return to custody after the short hearing.

Journalists were told by court officials not to approach the 12 family members of victims who attended the court hearing. The identity of the young woman who called out could not immediately be established.

Prosecutor Gary Hackbush, the chief of Buffalo’s homicide unit, said that a grand jury had convened on Wednesday and voted for an indictment against Gendron. The suspect had waived his right to a psychiatric evaluation, the court heard.

With Gendron’s next court appearance scheduled for 9 June, authorities continue to investigate the options of hate crime or terrorism charges.

Under New York criminal statutes, prosecutors can charge a defendant with first-degree murder only under special circumstances, including when multiple people are killed in a single incident. The single count covers all 10 deaths at the supermarket.

The Erie county district attorney, John Flynn, issued the following statement after the felony hearing was adjourned: “The defendant continues to remain held without bail. There will be no further comment from our office until there is a report following an investigation by the grand jury.”

The investigation includes hundreds of pages of writings by the suspect, detailing his plans for the assault and his racist motivations that he posted to a small group on the social media platform Discord 30 minutes before the shootings began. It is not yet clear if anyone who had access to the screed tried to alert police.

The House of Representatives passed a bill dealing with domestic terrorism that has previously languished in Congress after failing in the Senate.

Hochul also authorized the state’s attorney general, Letitia James, to investigate social media platforms used before the attack, to determine if they were liable for “providing a platform to plan and promote violence”.

The suspect wrote in the online forum that he planned the attack after becoming obsessed with white supremacist ideology he had found online. He wrote that he planned his attack in secret, with no outside help.

On 15 April he wrote: “I literally can’t wait any longer, my parents know something is wrong.”

Two months earlier, he wrote: “My parents know little about me.” “They don’t know about … the hundreds of dollars I’ve spent on ammo. They don’t know that I spent close to $1,000 on random military shit. They don’t even know I own a shotgun or an AR-15, or illegal magazines.”

In the messages, he wrote about tensions with Black students at school during childhood. In sixth grade, he wrote, he was suspended for a day after a Black student accused him of using a racist slur against her. In his posts, Gendron wrote he did not think of himself a true racist until 2020 when he began reading 4chan, the online message board.

Thursday’s hearing came after it was revealed that an emergency services dispatcher could lose her job after allegedly shouting at the employee at Tops Friendly grocery store who called 911 during the assault on the supermarket.

A Tops employee, who was hiding and terrified that the gunman might hear them, alleges the dispatcher asked why she was whispering – then hung up. The employee said she had to call her boyfriend and tell him to dial 911 and report the shooting.

The dispatcher, who has not been identified, is facing a disciplinary hearing next week where “termination will be sought”, according to NBC News.

Funeral services for the victims of the mass shooting, which included elderly customers and a retired Buffalo police officer, will begin on Friday in Buffalo with Deacon Heyward Patterson.