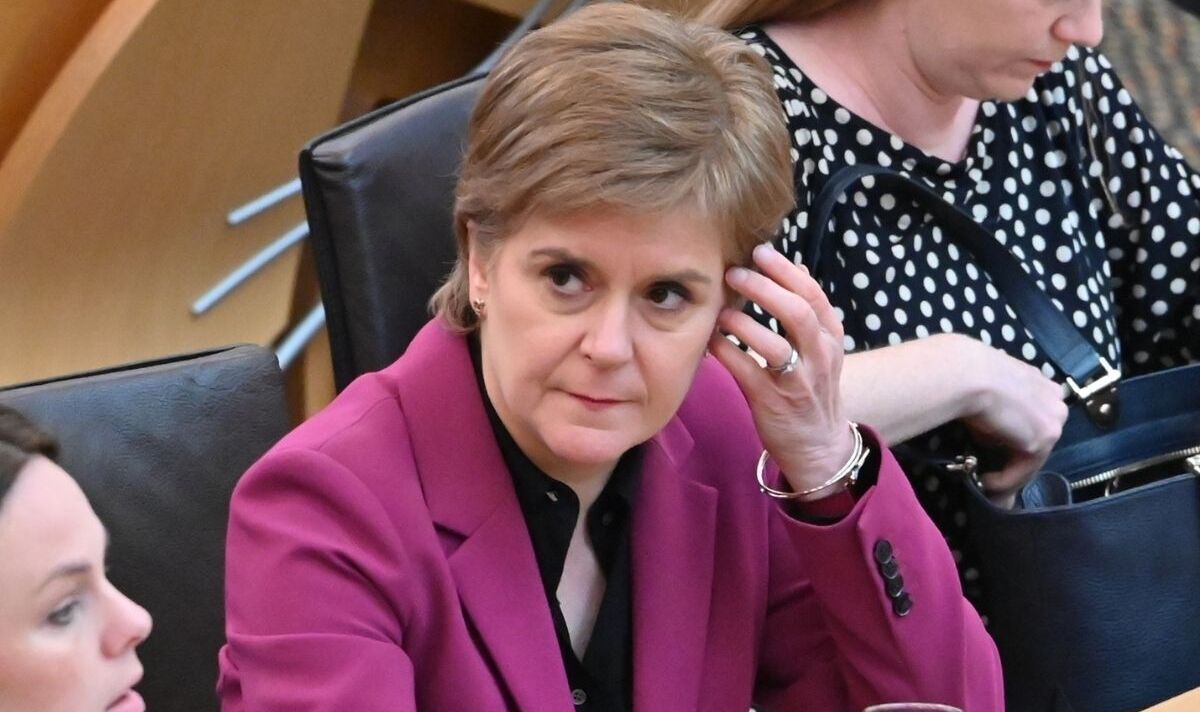 Finance Secretary Kate Forbes outlined the party’s spending plans until 2027, discussing how a total of over £180bn will be spent. The document, titled Investing in Scotland’s Future: Resource Spending Review, showed £20million will be spent during 2023/24 to hold a “referendum”. This comes as the SNP are blasted following analysis by the Institute for Fiscal Studies (IFS) which showed they face “tough decisions” to deal with an enormous £3.5billion black hole following “a series of expensive spending commitments on top of underlying spending pressures”, according to the think tank’s associate director David Phillips.

Alongside the substantial ring fenced sum is frozen spending across key public services.

Many of these are in the justice sector, such as police, prisons and courts – but also extend to higher education funding and student support.

Furthermore, local government funding will be frozen at £10.6billion for each year of this parliamentary term, although rising to £100million in 2025-56.

The review does include some increased public service spending, particularly on the health sector which will see a budget increase from £17.1billion to £19billion, likely to account for the creation of Scotland’s new national care service.

Social security spending will also be boosted with funding for benefits increasing from £3.9 billion to £6.3 billion in cash terms.

Overall, the budget for the Scottish Government is due to increase from £41.8billion to £47.5billion.

Business groups, unions and opposition groups have all expressed their shock at the review, claiming primarily that it came at a terrible time for Scots struggling with the cost of living crisis.

Alex Cole-Hamilton, leader of the Scottish Lib Dems, said: “SNP ministers must be collectively out of their tree if they think that £20m for a referendum on breaking up Britain is the best use of taxpayers cash in the teeth of the worst cost of living crisis since the end of rationing.

“This is a criminal use of public funds and they should be ashamed.”

Tory finance spokeswoman Liz Smith added: “Yet again, the SNP prove they will always find the money for their number one priority of pursuing independence.

“It is disgraceful at a time when families are suffering a cost-of-living crisis that the nationalists think it is appropriate to set aside such a vast sum for another divisive referendum.

“With hard-pressed families here in Scotland struggling to make ends meet, the SNP must urgently get on top of our economic decline.”

Philip Whyte, director of IPPR Scotland think tank, said: “Ultimately, it’s a Spending Review which had the opportunity to take difficult decisions, and a fresh approach to how resources are allocated. Instead, there’s a risk it falls short of what will likely be required to meet the challenges ahead – but without more detail we are still in the dark.”

Meanwhile Andrew McRae, the Federation of Small Businesses (FSB) Scotland policy chair, raised fears about what the review would mean for local companies.

He said: “Many in business will understand just how tough it will be for our public finance leaders to balance the books. Public bodies and local businesses alike are still reeling from the Covid crisis, and now face mounting overheads and other inflationary challenges.

“But the government’s decisions can cast a much longer shadow than those of a single small firm. For example, shutting down local public sector buildings might save money on paper, but it risks undermining collective efforts to turn town centres around.”

Addressing MSPs, Ms Forbes warned the Scottish government had to “prioritise” spending making clear not every policy area could be one.

She added ministersneeded to rethink how it delivered public services in the wake of Covid and Brexit.

She added the economic troubles facing Scotland only further reflect the need for an independence vote, saying:“It lays bare the constraints of the current fiscal framework – our budget largely decided by others, denied sufficient borrowing powers, yet facing the same demands for increased spending as governments with much greater levers do.”

She added the SNP would try to make sure public sector workers were given “fair” pay increases, but warned of a “severely limited budget”.