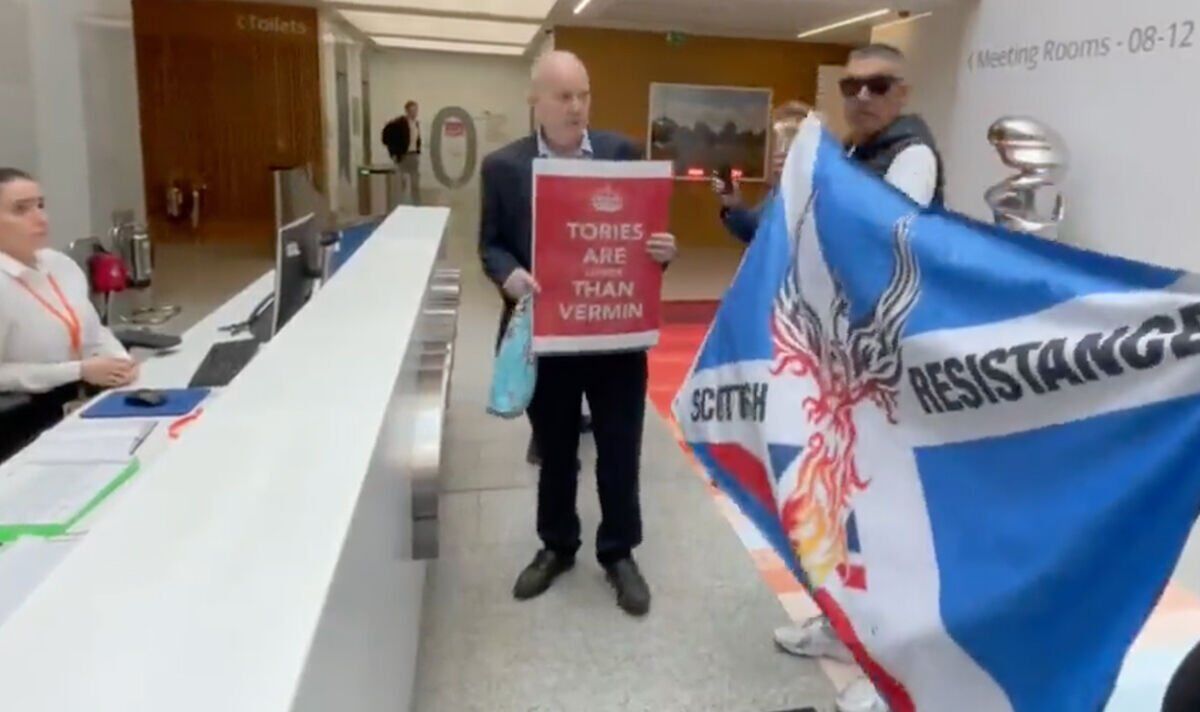 Footage shared on social media shows a group of protesters entering the building with flags and banners. One man is seen holding up a “Scottish Resistance” flag, while another man holds a sign saying: “Tories are lower than vermin.” That same protester then begins shouting: “Stop high energy prices. Taxes for the elite at 50 percent! People are going to die this winter. Electricity and gas prices are rising up to 150 percent – £4,200 in January.

“What we are saying to the Government is lower the prices, social tariffs for the poor, a standard tariff for everybody else, and not the daylight robbery that is going on.”

“It’s daylight robbery! We need to decouple the energy prices from the gas and the oil price on the international market.

“It’s daylight robbery by the Tories!”

Police were called. The protesters left the building after 10 minutes. No arrests were made

They claimed they have made their point and made a difference, according to Radio Clyde News.

A Police Scotland spokesperson said: “There were no arrests. Protest was peaceful and the demonstrators left on request of police.”

The small band of activists, led by social justice activist and pro-independence campaigner Sean Clerkin, also urged people to get behind the Don’t Pay campaign.

He and James Scott, the chief organiser of the Scottish Resistance, spoke in the reception are of the building, demanding rapid action to tackle the rising cost of living.

Before the protest, Mr Clerkin said: “It’s all about saying to the Westminster Government that these price hikes in energy are unacceptable.

“They have to bring in a standard tariff, where they basically decouple the price of oil and gas from the international market and go from the renewables and the nuclear to the highest of gas and oil, average the price out and you’ll have a far lower tariff for everybody.

“And also bring in a social tariff of discounted prices for the sick, the disabled, the dying and the elderly for this winter because if you don’t do that a lot of people are going to starve and die of cold-related death this winter.”

Mr Clerkin also backed calls from Nicola Sturgeon and Gordon Brown for urgent action to be undertaken to fight the cost of living crisis.

Scotland’s First Minister has demanded Boris Johnson organise an emergency meeting after following last week’s warning from the Bank of England the UK economy is heading for recession amid soaring inflation and rising bills.

Former Prime Minister Mr Brown has called for Tory leadership candidates Liz Truss and Rishi Sunak to agree to take action on the cost of living.

He also wants an emergency budget to be called with measures announced to help those who at most at risk.