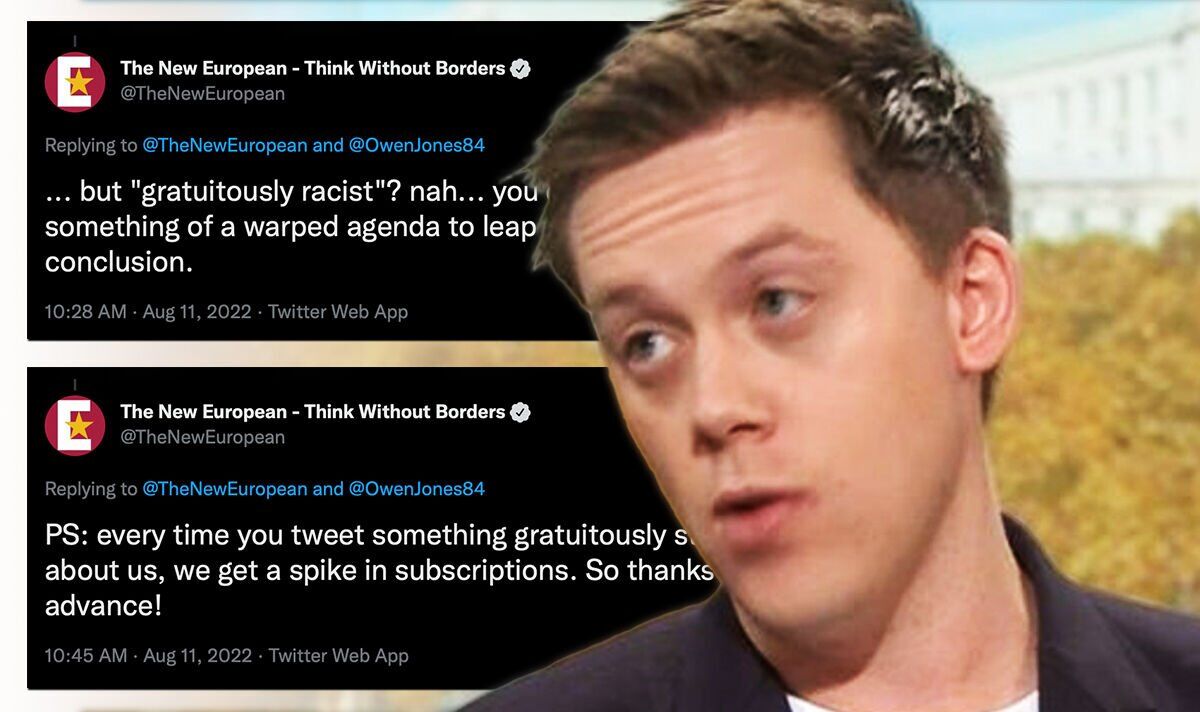 The pro-Remain newspaper’s front page featured a Chinese-stylised dragon wrapped around a map of Great Britain, the map is in the colours and style of China’s flag. The headline reads: “China’s increasing chokehold on Britain.”

The image did not sit well with left-wing author and Guardian columnist Owen Jones. He took to Twitter to slam the newspaper.

He posted the newest edition and said: “This is just plainly gratuitously racist.”

However, the anti-Brexit newspaper was quick to hit back at Mr Jones.

It said in a tweet: “This you, Owen? Not sure I’d start lecturing folk on racist covers while this is still on sale. PS, care to elaborate on why ours is racist?”

Alongside the tweet, the newspaper posted an image of the Spanish version of his book The Establishment: And How They Get Away with It.

The cover of that book includes a caricature by the artist Rata Langa, who has incorporated anti-Semitism into some of his work.

Some people have seen the cover of that version of Mr Jones’ book as anti-Semitic. There is no suggestion that Mr Jones is anti-Semitic and he himself has asked his publisher not to reprint this cover image.

Others jumped to agree with the pro-EU newspaper and weighed in on Twitter.

READ MORE: Prince Harry and Meghan Markle to be given charity award

Daniel Ball said: “Usually I agree with Owen Jones, but this is just nonsense, how is the Chinese Dragon, a proud symbol of China, racist?”

The New European pointed out that it may not have been the most original idea to use the Chinese dragon on their front page, but it disagreed that it was racist.

It tweeted several photos showing similar covers by The Economist, Time, and even the China Economic Review.

The New European said: “Perhaps it’s not the most original idea but ‘gratuitously racist’? Nah, you’d have to have something of a warped agenda to leap to that conclusion.”

The magazine continued to heckle Mr Jones. It added: “PS: every time you tweet something gratuitously stupid about us, we get a spike in subscriptions. So thanks in advance!”

Mr Jones hit back: “Nice to know my tweet has doubled your readership, good luck with your racist fans!”

The newspaper pressed Mr Jones, again, to explain why it was racist.

The dragon has long been used as a state symbol in China, during the imperial era, the dragon was seen as a symbol of strength and power.

However, today, it is rarely used for political or official purposes inside the People’s Republic of China.