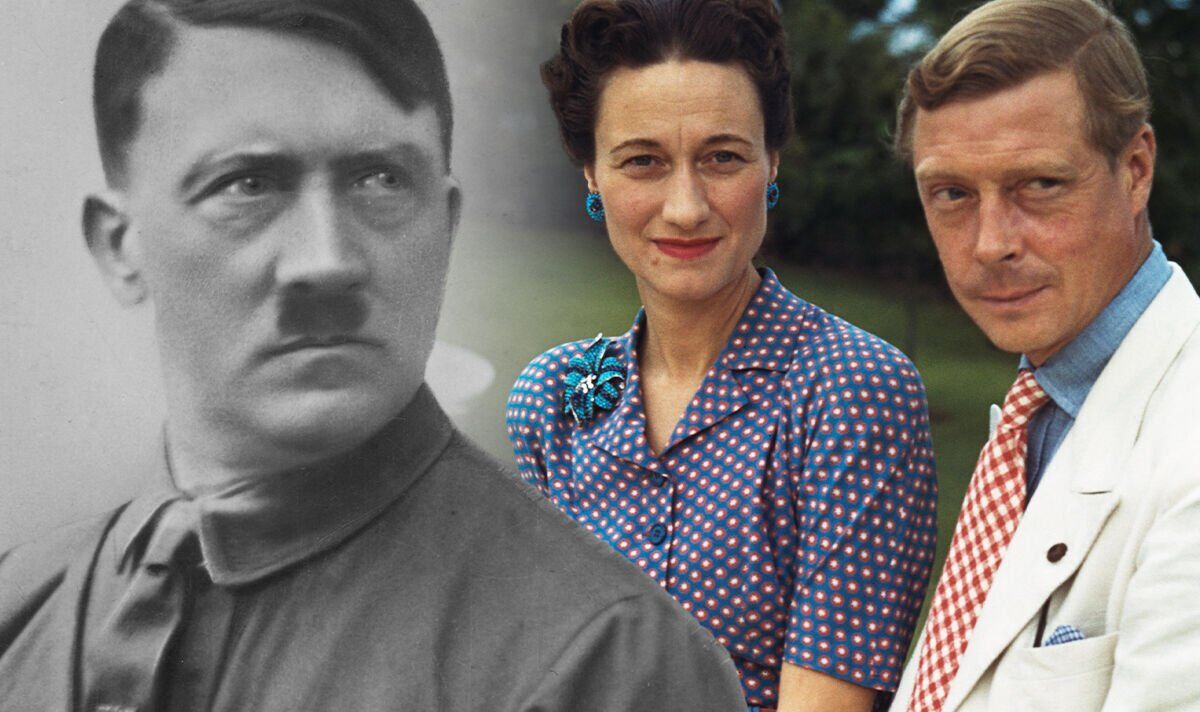 Following a brief reign, King Edward VIII abdicated in 1936 in order to marry American socialite Wallis Simpson — “the woman he loved”. His desire to wed Simpson was opposed by the British public, the Royal Family, and the Church of England, and led to a constitutional crisis: who would now head Britain’s monarchy? Simpson’s first marriage had already ended in divorce and she was, at the time, hoping to divorce her second husband – a status that was deemed then unacceptable for a Queen consort. The couple was, as a result, virtually exiled by the Royal Family: none of the Royals attended their wedding on June, 3 1937, the same day as King George V’s birthday.

It has been suggested that King Edward’s mother, Queen Mary, took this choice of date as a slight.

But just months later that same year, King Edward VIII and Simpson were to do something far worse.

The newlywed couple went on a tour of Nazi Germany, where the Union Jack flag was flown next to the Nazi flag.

This trip also included a visit to see the Third Reich’s disgraced dictator and the Duke and Duchess of Windsor were hosted by Adolf Hitler himself in Bavaria; while there, the Duke of Windsor gave a Nazi salute.

Speaking on the podcast, Ms Schwartz said: “The former King of England definitely had more sympathy for the Nazis during World War Two than could possibly be comfortable for England, or for us today…”

Between 1933 and 1945, the Nazis murdered approximately 11 million Jews, Roma and Sinti, those with disabilities, Poles, Jehovah’s Witnesses, homosexual people, and Soviet prisoners of war.

Historian Andrew Lownie, who penned the book, Traitor King, about the years that follow King Edward VIII’s abdication, also believes that he was aware of what monstrosities were being planned and carried out in Germany at the time of his visit.

He told Vanity Fair in July: “I think he knew perfectly well. When he did his tour [of Germany] in October 1937, he saw a concentration camp. He inspected the SS.

“He read the papers, so he must have seen even before the war there were all sorts of terrible things going on.

“I don’t think he could have had any misconception about what the Nazis were about.”

Ms Schwartz continued: “David was known to make derogatory comments about Jewish people, indigenous Australians, and those whom he called ‘the n**ro’… It feels strange to even try to tease out how racist even a person’s individual views are when they were rubbing elbows with Hitler.

“But when we’re trying to figure out David’s motivations here, I think it’s worth noting that on a personal level, David probably wasn’t in full philosophical alignment with how vile and violent Hitler’s ideas on racial purity were. But David was more than willing to overlook those horrific policies and socalise with the Nazi high brass.

“Though David told himself a narrative of preserving peace, in my opinion at the end of the day it was a matter of ego and self-interest.

“David’s much-loved bride was never treated well by his family or the British Royals. But over in Germany, Hitler was all too happy to flatter her. Rumour had it that David dreamed of being reinstated as king with Wallis as Queen after Hitler’s victory.”

For the Duke of Windsor and his Duchess, the Germans represented a promise to be included, she claimed.

Ms Schwartz added: “David was willing to happily turn the other cheek in order to serve his own personal interests.”

According to royal expert Richard Fitzwilliams, the title of the Duke of Windsor has been tainted by Edward VIII and it is now unusable for future members of the royal family.