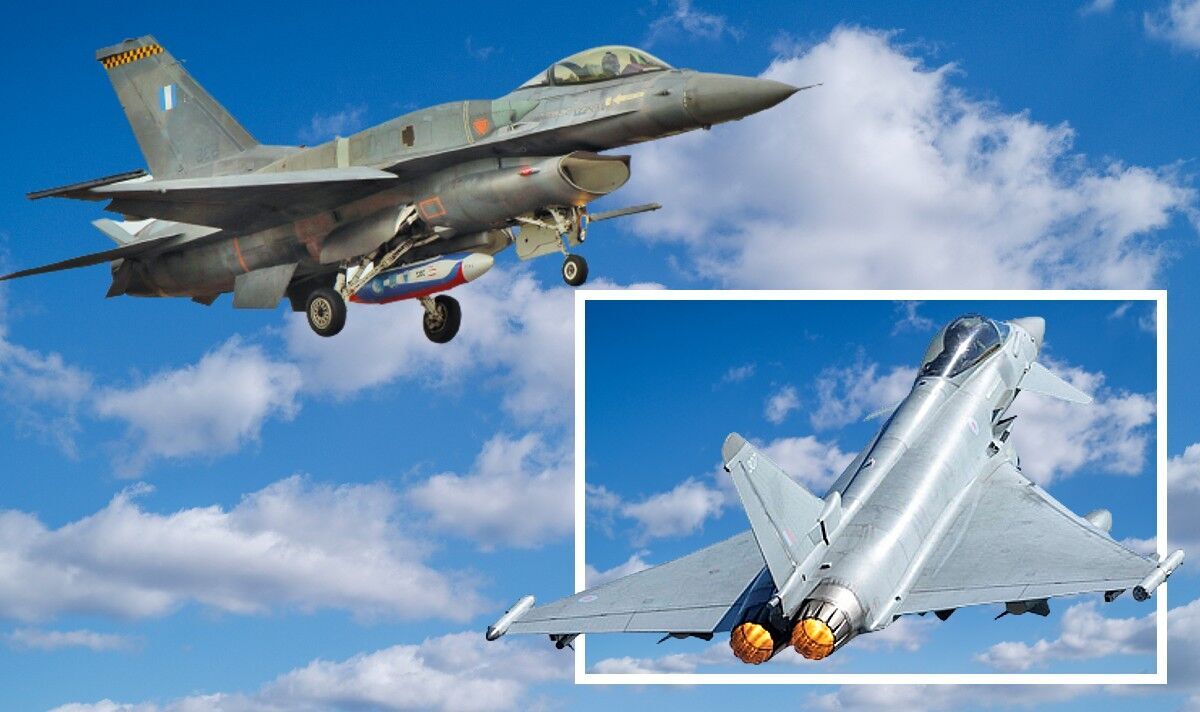 The news comes following a similar drill last month in which British Typhoons again held mock aerial battles with French Rafale jets over the warm waters of the Mediterranean Sea. The Typhoons are based in Romania and were supported by an RAF Voyager tanker from the 903 Expeditionary Air Wing, based out of RAF Akrotiri on the island of Cyprus.

Speaking of the exercise, Flight Lieutenant Whatmough, a pilot from 3 Squadron said: “This type of training improves interoperability and provides an opportunity for pilots on both sides to test the capabilities of their respective platforms.

“Training with the Hellenic Air Force and their F-16 aircraft has provided 3(F)Sqn with some fantastic opportunities to once again explore the capabilities of Typhoon alongside our NATO partners.

“This flight brings an end to the multinational exercises conducted during Op BILOXI 22.

“The training we’ve undertaken has been invaluable in ensuring the Pilots, Ground Crew and Aerospace Battle Managers gain the experience required to maintain Operational Capability.”

A statement by the RAF added: “Over the course of the 4-month deployment to Romania, alongside carrying out the NATO enhanced Air Policing and enhanced Vigilance Activity missions, the Typhoons from 3(F) Squadron have conducted several bilateral training serials with multiple NATO nations.”

3 Squadron is normally based at RAF Coningsby, and is one of two Quick Reaction Alert (QRA) stations in the United Kingdom.

Since the Russian-led invasion of Ukraine, NATO allies have vowed to increase their presence on the borders of Eastern Europe.

Furthermore, member nations have pledged to increase defence spending, with the UK, Germany and France all pledging to increase well in excess of the minimum suggested sum of two percent.

Aside from training with NATO partners, British military personnel have been working closely with Ukrainian soldiers in recent weeks.

According to RAF News, British gunners are instructing the first of up to 10,000 Ukrainian soldiers in Britain.

Brize-based II Squadron RAF Regiment is among 1,050 British service personnel deployed at military bases across the country involved in the training.

The training is aimed at providing Ukrainian troops with the ability to handle weapons, combat skills, battlefield first aid and patrol tactics.

British forces have obtained a series of AK assault rifles for the training and will issue recruits with protective equipment, clothing and field kit.

Aside from providing training to personnel, the UK has pledged hundreds of drones, anti-tank weapons and small arms to Ukraine.

So far, the UK has provided nearly 7,000 NLAW, Javelin and Brimstone anti-tank weapons, which many credits for the devastating loss of Russian tanks, which latest figures put at 1,789 since the start of the war.

On a personnel scale, Ukrainian sources claim over 41,500 Russian soldiers have been killed, leaving a huge dent in Vladimir Putin’s forces, who have now been said to turn to prison convicts to make up numbers on the front line.

Over 4,000 Russian armoured personnel carriers have also been wiped out by Ukrainian defences.

The arrival of the HIMARS missile system has widely swung the war in favour of Ukraine, with Russia forced to take extreme measures by turning to long-range and more inaccurate weapons.

The RAF has also deployed surveillance aircraft around the Black Sea providing intelligence on the latest Russian movements, which over recent weeks have appeared to stagnate as Ukrainian defences continue to have a devastating impact on the Russian military and its supply chain to the front line.