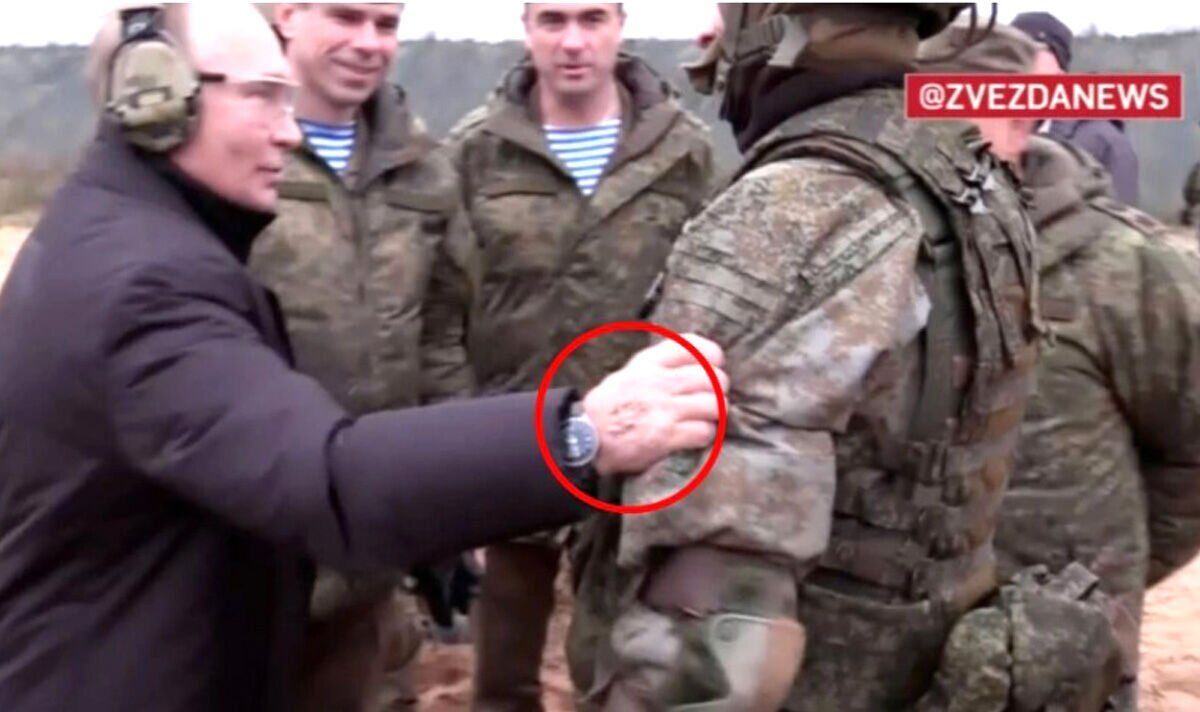 Russian state news has hastiy deleted footage of Putin after it showed what appeared to be “track marks from IVs [intravenous therapy]” on the back of the autocrat’s hand. The film, released and then retracted by Zvezda News, showed Putin firing a rifle before greeting soldiers. As he pats one of them on the shoulder, the marks are exposed on his right hand. It comes as rumours continue to swirl that the Russian tyrant is suffering from a rare cancer and Parkinson’s – and travels with an entourage of medics.

The Kremlin released two videos of the event, one with watermarks, which partly concealed the tracks, and the other without any shot of his hand.

A special correspondent for the Kyiv Post, Jason Jay Smart, posted the video on Twitter with some screenshots of Putin’s seemingly-injured hand.

Alongside the photos, he posted the following caption: “Videos released by Russian Government news show what could be track marks, from IVs, on the hand of Putin.”

But social media users were torn over whether the marks were, in fact, evidence of the use of an IV.

One user described the claims as a “major stretch”, while another suggested IVs do not leave tracks because the areas in which they are inserted are constantly changed.

One wrote: “Come on. That’s a major stretch. This could be the way the light plays with shadows, these could be camera artefacts, or these simply natural changes to veins of this 70-year-old man.”

Another user wrote: “Oh, I am doubtful of that. I get IVs once a week and have been doing it for 18 months.

“They rotate sites and the needles may leave a bruise,but I don’t have tracks. The hands are not the best choice, either.”

But some users were convinced by the video, with one arguing that the marks looked like “sclerotic veins from multiple IV catheters”.

Another user remarked on the movement of Putin’s right arm, saying: “The right arm not naturally swinging for balance is consistent since the beginning of the war now. It is often a sign for Parkinson’s or dementia.”

Putin was visiting a Russian military training facility in the Ryazan region alongside his defence minister Sergei Shoigu to meet soldiers and try out a newly developed sniper rifle when the footage was taken.

He was seen wearing ear protectors and safety glasses as he lay under a net and fired several shots from the Russian SVD sniper at a target roughly 1,000 feet away.

He was also filmed speaking to officers, shaking hands with them and wishing them “good luck”.

According to Russian state media, the autocrat was “observing practical exercises” at the facility, including fire drills, engineering and medical training.