Skip to content
HomeNewsPutin on the brink: Crimea blasts ‘having psychological effect’ on Russian President 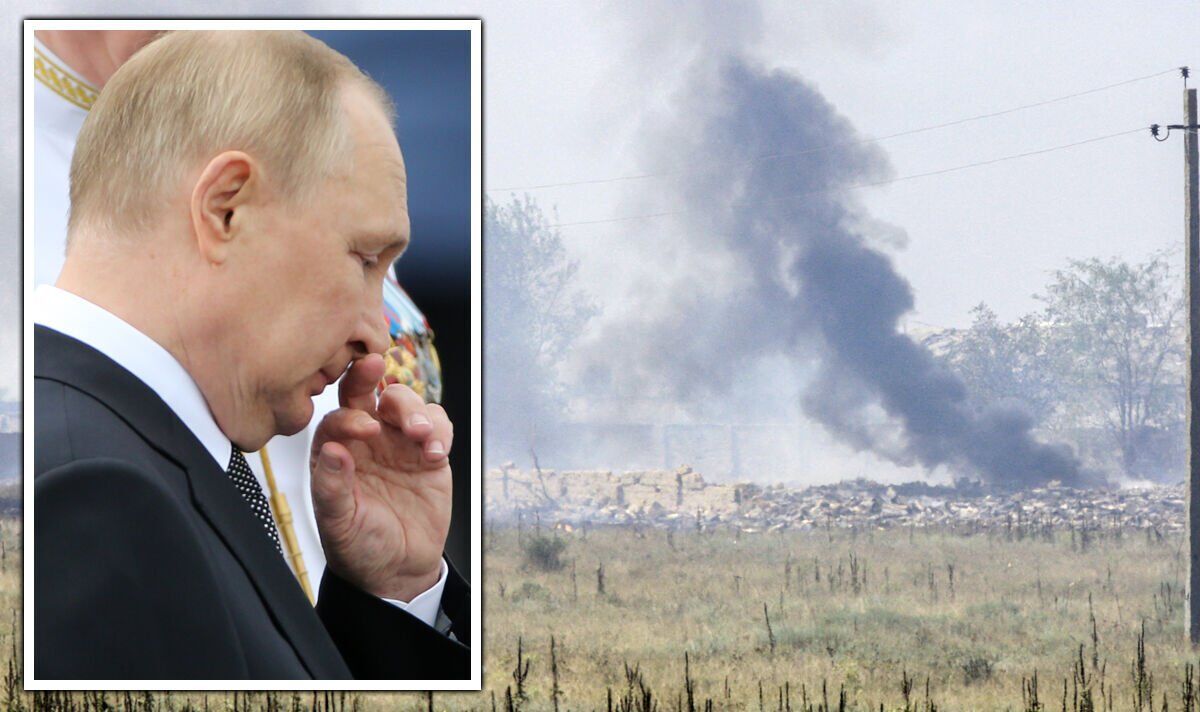 And the steady influx of people returning from the occupied peninsula is making it increasingly difficult to conceal the truth from the Russian population as a whole. More than half of the Russian navy’s Black Sea Fleet combat jets were put out of action in blasts last week at the Russian-operated Saky military airfield in western Crimea – an area Moscow previously considered secure, the insiders explained today.

The Kremlin is busy seeking to allocate blame for the debacle and President Vladimir Putin is struggling to hide Ukraine’s success from the Russian population, as thousands of Russians fleeing Crimea have streamed into the country, the officials added.

“The incidents have been having a material effect on Russia’s logistics support, but as importantly, there’s a significant psychological effect on the Russian leadership.”

They added the attacks had forced the Black Sea Fleet into a defensive posture and stymied Russia’s ability to launch a successful amphibious assault on Odesa on Ukraine’s coast.

It comes as the war has entered a phase of “near operational standstill”, with neither side’s ground forces having enough concentrated combat power to launch effective offensive actions.

Russia is facing an increasingly acute shortage of stocks, even of basic munition, as well as manpower issues as it struggles to reconstitute its forces, the Western official stressed.

Amid concerns that shelling of the Russian-controlled Zaporizhzhia plant in southern Ukraine – Europe’s largest nuclear power plant – could lead to nuclear catastrophe, the official said it was built to withstand most direct military fire.

They said the main concerns are around the nuclear reactors losing water cooling due to a loss of electricity supply.

At least a dozen civilians were killed by Russian strikes in Ukraine’s second-largest city of Kharkiv this week, according to the Ministry of Defence.

They added that Moscow was not planning to launch an offensive in the area or gain any major operational advantage from the bombardment.

Meanwhile, the head of the GCHQ intelligence service said Moscow had failed to gain ground in cyberspace against Ukraine.

Writing in the Economist, Sir Jeremy Fleming said: “So far, President Putin has comprehensively lost the information war in Ukraine and in the West.

“Just as with its land invasion, Russia’s initial online plans appear to have fallen short.”

In another stark illustration of the challenges facing Putin’s forces, explosions erupted overnight near military bases deep in Russian-held areas of Ukraine and Russia itself in an apparent display of Kyiv’s rapidly growing ability to wreak havoc on Moscow’s logistics far from front lines.

Inside Russia, two villages were evacuated after explosions at an ammunition dump in Belgorod province, near the Ukrainian border but more than 100km (60 miles) from territory controlled by Ukrainian forces.

Closer to the front, Kyiv also announced a number of strikes overnight behind Russian lines in southern Kherson province, including at a bridge at the Kakhovska Dam, one of the last routes for Russia to supply thousands of troops on the west bank of the Dnipro River.