Separatists in Donbas, Kherson and Zaporizhia regions to hold referendums on joining Russia from September 23 to 27.

Officials in four Russian-controlled regions in eastern and southern Ukraine have said they will hold referendums on becoming part of Russia from September 23 to 27, which could set the stage for Moscow to escalate the war following Ukrainian successes on the battlefield.

Votes will take place in the self-proclaimed Donetsk and Luhansk republics of the Donbas region, which Russian President Vladimir Putin recognised as independent shortly before sending troops to Ukraine in February, according to officials and news agencies.

A vote will also be held in the southern Kherson region that Moscow’s troops captured in the early days of Russia’s offensive in Ukraine, and in the partly Russian-controlled Zaporizhia region.

Their integration into Russia would represent a significant escalation of the conflict in Ukraine as Moscow would be able to say it is defending its own territory from Ukrainian forces.

“The People’s Council ruled … to set the days of the referendum for September 23 to September 27,” separatist official Denis Miroshnichenko said as quoted by a Luhansk news portal.

Shortly after, the official Donetsk News Agency announced that a referendum would be held in its territory on the same dates. 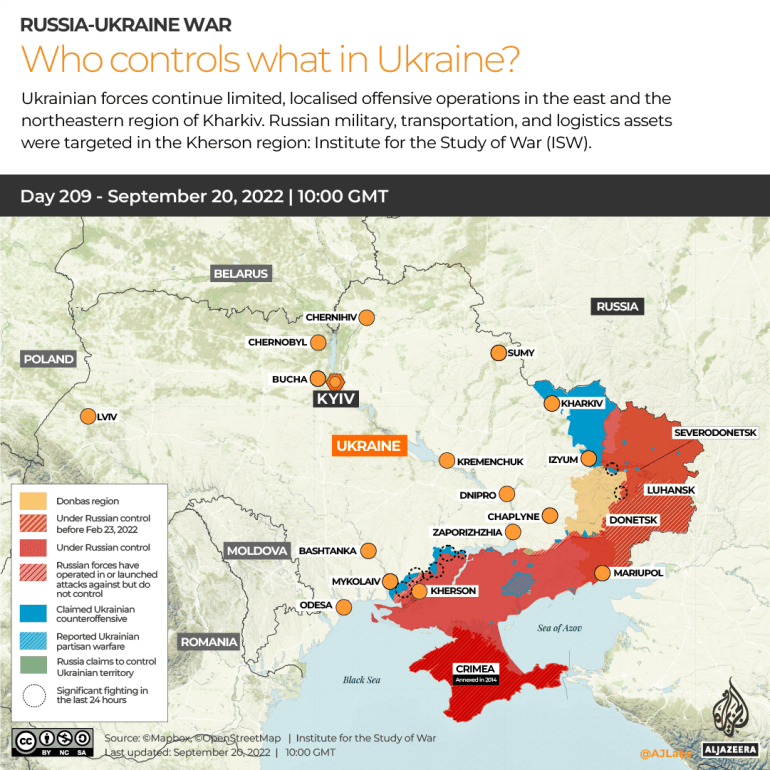 In a separate statement, the leader of the Donetsk rebel group Denis Pushilin asked Putin to consider the region becoming part of Russia “as soon as possible”.

“The long-suffering people of Donbas deserve to be part of the Great Country, which they always considered their Motherland,” Pushilin said on social media.

“I am sure that the entry of the Kherson region into the Russian Federation will secure our territory and restore historical justice,” the Moscow-installed head of that region, Vladimir Saldo, said in a statement on Tuesday announcing the September vote.

He added that it was a “necessary decision in the face of constant acts of terror by the armed forces of Ukraine and NATO member countries that supply weapons to kill civilians on our soil”.

Russian forces control about 95 percent of Ukraine’s Kherson territory in the south of the country.

The head of the Russian-installed administration in Zaporizhia, Yevgeny Balitsky, said on Telegram: “Today I signed an order on the holding of a referendum on the territorial allegiance of the region” from September 23 to 27.

The Kremlin has repeatedly said the issue is a matter for the local Russian-installed officials and citizens of the regions to decide.

Saldo’s remarks echoed those made by Kremlin ally and former President Dmitry Medvedev earlier on Tuesday, in which he called for the Kremlin to let the separatists join Russia.

Shortly after Saldo’s announcement about plans for a vote in Kherson, the head of Russia’s parliament said he would support the regions joining Russia.

“Today, we need to support the republics with which we have signed mutual assistance agreements,” Russia’s state Duma speaker Vyacheslav Volodin said, referring to agreements signed between Moscow and the Donetsk People’s Republic (DPR) and the Luhansk People’s Republic (LPR) that paved the way for the Kremlin to dispatch tens of thousands of troops into Ukraine in February.

Large parts of the industrial Donbas area have been controlled by Moscow-backed separatists since 2014, after nationwide demonstrations deposed Ukraine’s Kremlin-friendly president.

Russia at the time annexed the Crimean Peninsula from Ukraine with a vote that was criticised by Kyiv and the West, which imposed sanctions in response.