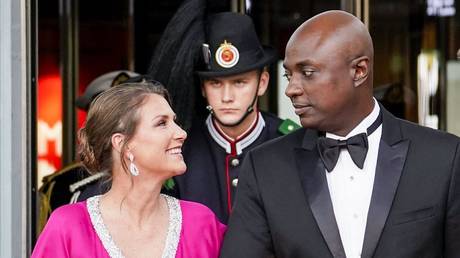 Norway’s Princess Martha Louise has abandoned her patronages to marry an African-American guru from Hollywood
Norway’s royal family announced on Tuesday that Princess Martha Louise would cease her official duties and relinquish her patronages to focus on her relationship with Durek Verrett, a self-proclaimed “shaman” to the stars who sells magic amulets.In an official statement, the royal court said Martha Louise would no longer use the title of Princess or refer to the royal family in her commercial ventures or on her social media accounts, while other members of the family would take over patronage of the organizations she sponsored.“The Princess is taking this step to create a clearer dividing line between her business activities and her role as a member of the royal family,” the statement read.

Martha Louise, 51, is no stranger to controversy, having lost her ‘Her Royal Highness’ title in 2002 when she claimed she could speak to angels and chose to work as a clairvoyant. However, the latest move came after a surge in media interest in her relationship with Durek Verrett, a so-called “6th-generation shaman.” Verrett, who charges $1,500 for a virtual consultation, has reportedly worked with celebrities like Gwenyth Paltrow and Antonio Banderas. Verrett claimed in his book, ‘Spirit Hacking’, that the human mind can cure cancer, and uses his website to sell ‘Spirit Optimizer’ medallions that adjust “imbalances in frequency relationships to bring you peace,” and protect the user from “evil eye spells, curses, or magic meant to harm you.”Verrett, who claimed that using one of these trinkets cured him of Covid-19, has been described in the Norwegian media as a “swindler.”Martha Louise and Verrett are engaged. Once married, Verrett will not gain a royal title or represent the royal court, but will “become a part of the royal family,” the court’s statement said.
You can share this story on social media:
Follow RT on