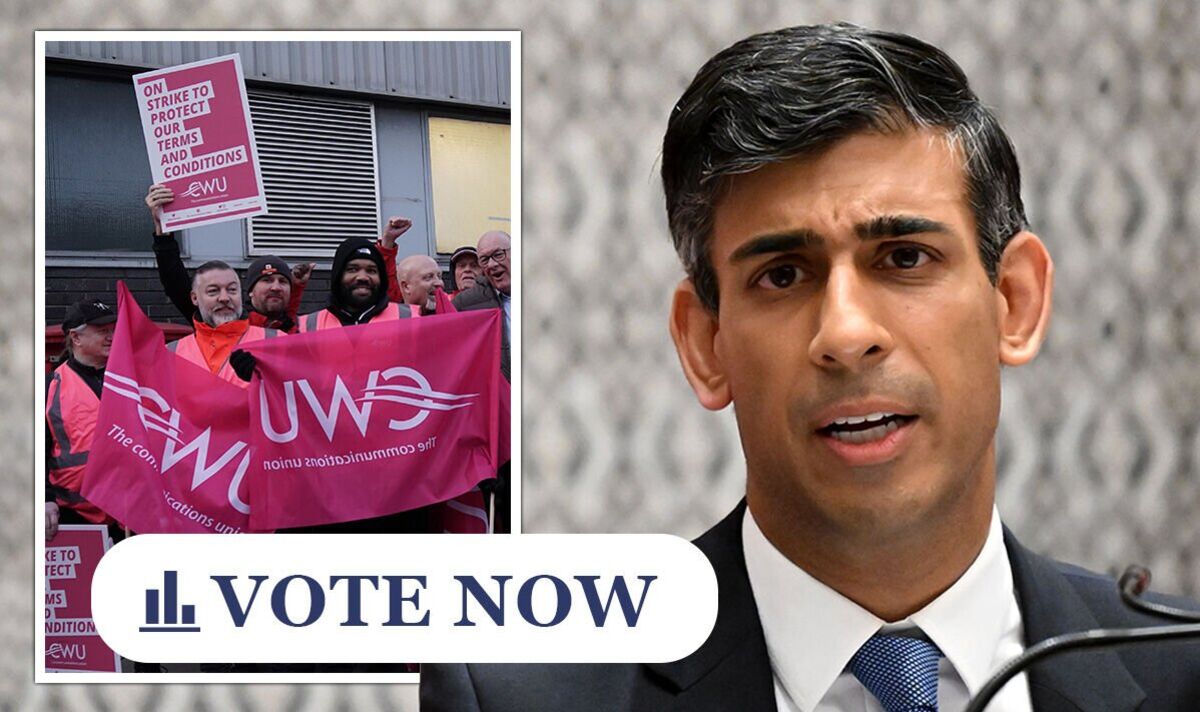 The UK is facing the biggest wave of strikes since the 1980s as thousands of workers prepare to take industrial action over the festive period. Now, Prime Minister Rishi Sunak is being pressured by Tory MPs to impose new anti-strike legislation aimed to make walkouts largely ineffective. But do you support this? Vote in our poll.

Industrial action is planned for almost every day in December with rail workers, nurses, teachers, driving examiners and postal workers among those taking a stand.

The disruption is expected to be the worst in any month since July 1989. Reacting to the planned industrial action, Tory MP and former chief secretary to the Treasury Simon Clarke said: “These are very difficult times for the economy because of Putin’s war, but the public sector needs to recognise the private sector isn’t getting anywhere near the [pay] increases they are demanding, which, if pursued, would lead to a self-defeating inflationary spiral.

“If the unions refuse to come to their senses, the Government should absolutely push ahead with minimum service legislation.”

Former Prime Minister Boris Johnson promised the minimum service legislation in the 2019 general election but has been stalled in its journey through Parliament, only introduced in late October.

READ MORE: More than 10,000 ambulance workers will strike before Christmas

The second reading has not been scheduled over fears it could damage relations with rail unions. In addition, if the Bill became law next year further negotiations and secondary legislation would be required, meaning it may not take effect until late 2023.

One Tory member of the transport select committee, Chris Loder, said: “Liz Truss said she’d have this done within 30 days of becoming Prime Minister. We are now at a point well past that.

“There are questions about the deliverability of this legislation but if the Government is going to do this they need to crack on.”

Another minister said: “If the Christmas Eve strike goes ahead, we need to crack on with the anti-strike laws early in the new year.”

Mr Sunak’s official spokesperson said: “Our focus on legislation with regard to strikes is on minimum service levels. The bill we introduced in October is the first step in achieving this.

“We are keeping under review what is the right balance with regard to strikes. We won’t hesitate to bring forward changes if we judge they are required.”

However, Labour leader Sir Keir Starmer has argued that new laws to limit strike action is not “the best way forward”.

He explained: “I don’t think more legislation restricting the right to strike is the right way forward. I think Government should fix the underlying problem. Government has been sitting on its hands throughout these disputes, rather than resolving them.”

So what do YOU think? Should the government impose anti-strike legislation? Vote in our poll and leave your thoughts in the comment section below.