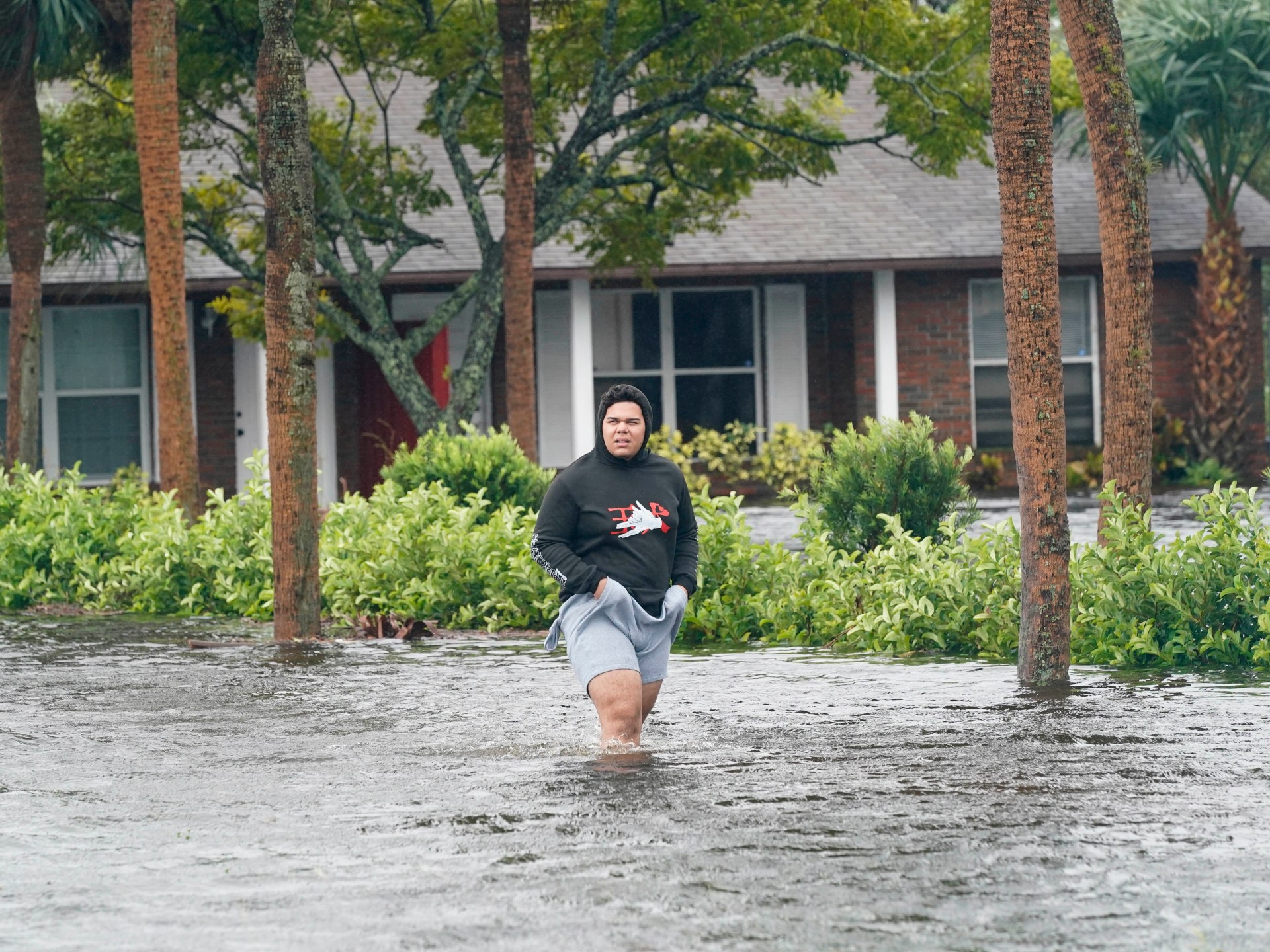 Authorities said the full extent of the damage from strong winds and flooring expected to be revealed later on Thursday.

Hurricane Ian has cut a path of destruction across the US state of Florida, with floods trapping people in homes and power knocked out for about 2.5 million residents.

Authorities had only begun to assess the damage from the hurricane, one of the strongest to hit the United States in years, early on Thursday, with no electricity and virtually no mobile service making it near impossible for many people to call for help from the hardest hit coastal areas in the southwest of the state abutting the Gulf of Mexico, where the hurricane made landfall.

Authorities confirmed at least one death in Florida – of a 72-year-old man in Deltona who fell into a canal while using a hose to drain his pool in the heavy rain, the Volusia County Sheriff’s Office said.

A boat carrying Cuban migrants sank on Wednesday in stormy weather east of Key West. Rescuers were able to save three people. Twenty others remained missing.

An unspecified number of people were stranded in high-risk areas of Florida after choosing to ride out the storm at home rather than heed evacuation orders, but they were beyond the immediate reach of rescue crews, Governor Ron DeSantis said.

“The impacts of this storm are historic and the damage that was done was historic,” DeSantis said during a news briefing. “We have never seen a flood event like this. We have never seen storm surge of this magnitude.”

In Collier County, which includes the coastal city of Naples, the sheriff’s office said portable towers were being installed to provide mobile service.

“We can tell you as daylight reveals the aftermath, it’s going to be a hard day,” the office posted on its Facebook page.

In neighbouring Lee County, which includes the city of Fort Myers, Sheriff Carmine Marceno said: “Many residents are currently without power and unable to communicate.”

In a Facebook post, he said officers could be dispatched to check on loved ones if they are able to access the affected areas. Law enforcement officials in Fort Myers said they received several calls from people trapped in flooded homes or from worried relatives.

The National Hurricane Center (NHC) said Ian became a tropical storm after making landfall in Florida late on Wednesday. It was expected to become a hurricane again later on Thursday before making landfall for the second time on Friday, the NHC said, issuing a hurricane warning for the entire coast of South Carolina.

Ian’s had packed Category 4 strength when it first hit Florida with 241kmph (150mph) winds, tying for the fifth-strongest hurricane, when measured by wind speed, ever to strike the US.

US President Joe Biden approved a disaster declaration on Thursday, making federal resources available to the counties affected by Ian.

Meanwhile, the NHC, which is based in Miami, said a stretch of the state’s gulf coast remained inundated by ocean water that had surged ashore during the hurricane.

“Severe and life-threatening storm surge inundation of 8 to 10 feet [2.5 to 3 metres] above ground level along with destructive waves is ongoing along the southwest Florida coastline from Englewood to Bonita Beach, including Charlotte Harbor,” the centre said.

A chunk of the Sanibel Causeway, which connects mainland Florida to Sanibel Island, also fell into the sea during the hurricane, cutting off access. It was not immediately clear how many of the 6,300 residents of the islands heeded mandatory evacuation orders prior to the storm.

In Port Charlotte, the storm surge flooded a hospital’s emergency room as fierce winds ripped away part of the roof from its intensive care unit, a doctor who works there told The Associated Press news agency.

The flooding forced workers to evacuate the sickest patients – some on ventilators – to other floors, according to Dr Birgit Bodine of HCA Florida Fawcett Hospital.

The hurricane slammed Cuba on Tuesday, killing two people and bringing down the country’s electrical grid. The island slowly began to restore power by Thursday.