Russia’s leader said he has no plans “for now” to launch massive air raids such as those carried out this week, in which more than 100 long-range missiles were fired at targets across Ukraine.

“We do not set ourselves the task of destroying Ukraine. No, of course not,” Russian President Vladimir Putin said on Friday at the end of a summit in Kazakhstan.

He added the call-up of reservists would be finished in two weeks, promising an end to the divisive mobilisation that has seen hundreds of thousands of men summoned to fight in Ukraine and huge numbers fleeing the country.

Defending the mobilisation order, Putin told a news conference the front line was too long to defend solely with contract soldiers. He ordered the call-up to bolster the fight along a 1,100-km (684-mile) front line where Ukrainian counteroffensives have inflicted blows to Moscow’s military prestige.

Since the mobilisation order was given, Russian forces have continued to lose ground in eastern Ukraine and also lost a substantial area in the south.

Even some of Putin’s own supporters have criticised the Kremlin’s handling of the war, increasing pressure on him to do more to turn the tide in Russia’s favour.

After attending the summit of regional leaders from Asia and Eastern Europe, Putin said he did not regret sending troops into Ukraine nearly eight months ago.

“What is happening today is unpleasant, to put it mildly,” he said. “But we would have had all this a little later, only under worse conditions for us, that’s all. So my actions are correct and timely.”

‘Do not believe Putin’

The troop mobilisation was troubled from the start with confusion about who was eligible for the draft in a country where almost all men under age 65 are registered as reservists.

Russia’s leader said all activated recruits will receive needed training and he would assign Russia’s Security Council “to conduct an inspection of how mobilised citizens are being trained”.

But reports have indicated recruits deployed to the front lines in Ukraine have received little training and inadequate equipment. Several mobilised reservists were reported to have died in combat in Ukraine this week.

Asked about the possibility of expanded conscription, the Russian president said the defence ministry had not asked him to authorise that. “In the foreseeable future, I don’t see any need. Nothing further is planned.”

But some questioned the veracity of Putin’s comments.

“Do not believe Putin about ‘two weeks.’ Mobilisation can only be canceled by his decree. No decree – no cancellation,” Vyacheslav Gimadi, a lawyer at imprisoned opposition leader Alexey Navalny’s Anti-Corruption Foundation, wrote on Facebook. 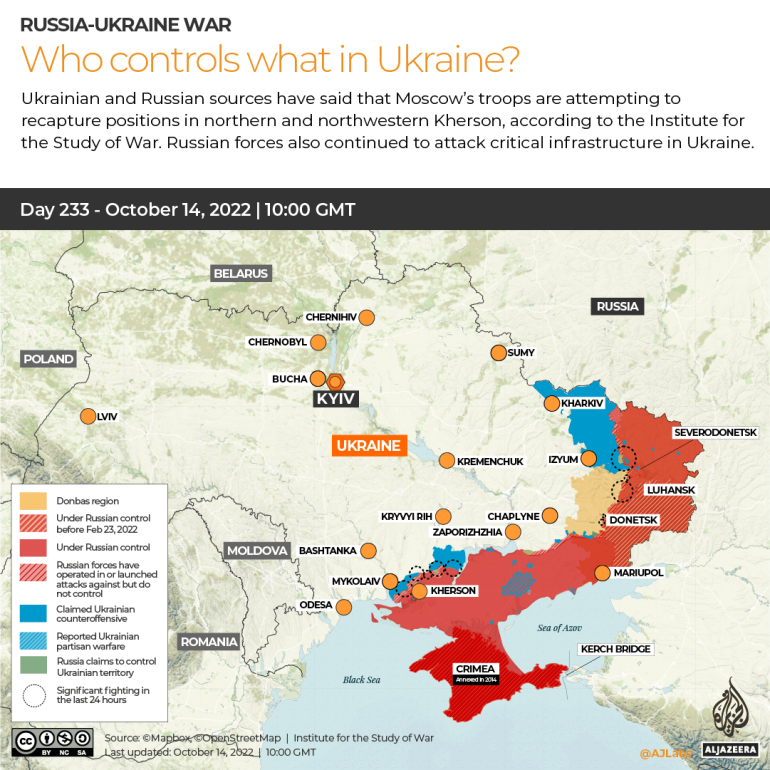 The war’s momentum has shifted towards Ukraine as its military recaptures cities, towns and villages that Russia took early in the war.

Ukrainian forces reported retaking 75 populated places in the north of the Kherson region in the last month, according to Ukraine’s Ministry for Reintegration of Temporarily Occupied Territories.

A similar campaign in eastern Ukraine resulted in most of the Kharkiv region returning to Ukrainian control, as well as parts of the Donetsk and Luhansk regions, the ministry said.

Konstantin, a Kherson resident who withheld his last name for safety reasons, said columns of military trucks moved around the region’s capital and eventually left. Most government offices reduced working hours, and schools were closed, he said.

“The city is now in suspense. Primarily, the Russian military from the headquarters and the family of collaborators are leaving,” Konstantin said. “Everyone is discussing the imminent arrival of the Ukrainian military and preparing for it.”

Putin repeated the claim that Russia was prepared for peace talks, blaming Kyiv for the lack of negotiations.

“We even reached certain agreements in Istanbul [in the spring],” Putin said, thanking Turkish President Recep Tayyip Erdogan for his mediation efforts.

“These agreements were actually almost initialled. But as soon as the [Russian] troops withdrew from Kyiv, the Kyiv authorities immediately lost the desire to negotiate.”

Ukraine officially rejected any possibility of negotiating with Putin after he illegally annexed Ukraine’s Kherson, Zaporizhia, Donetsk and Luhansk regions as Russian territory last month following “referendums” that Kyiv and the West denounced as a sham.

Putin has promised to retaliate harshly if Ukraine or its allies attack Russian territory, including the annexed regions of Ukraine. Russia’s Belgorod region on the border with Ukraine came under attack for a second day Friday.

Ukrainian shelling blew up an ammunition depot in Belgorod on Thursday, killing and wounding an unspecified number of people, according to Russia’s Investigative Committee.

“We have buried the myth of the invincibility of the Russian army,” General Valeriy Zaluzhny, commander of Ukraine’s armed forces, said in a video message on Friday, pledging to liberate all Russian-occupied areas.