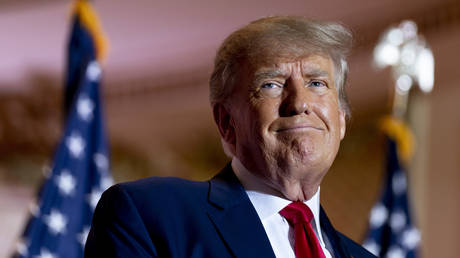 The conservative-leaning newspaper has apparently thrown its weight behind Florida Governor Ron DeSantis
The New York Post relegated former President Donald Trump’s 2024 campaign announcement to its back pages, mockingly describing him as an “avid golfer” and a “Florida retiree.” The Post has harshly criticized Trump since last week’s midterm elections, and appears to consider Florida Governor Ron DeSantis the future of the GOP.“Florida Man Makes Announcement,” read a banner beneath the Post’s front page on Wednesday, after Trump announced his candidacy the night before. Inside, on the paper’s 26th page, the insults continued.“Avid golfer Donald J. Trump kicked things off at Mar-a-Lago, his resort and classified-documents library,” the story read.“Trump, famous for gold-plated lobbies and for firing people on reality television, will be 78 in 2024,” it continued. “His cholesterol levels are unknown but his favorite food is a charred steak with ketchup. He has stated that his qualifications for office include being a ‘stable genius’.”“Trump also served as the 45th president,” the story concluded.The article marks a dramatic shift in the Post’s stance, after its editorial board gave Trump an enthusiastic endorsement for re-election in 2020. “He has kept his promises,” the board wrote. “Re-electing him is the best choice for the United States.”Since Republicans underperformed in last week’s midterm elections, however, the Post’s tone has been frostier. Its front page last Thursday depicted him as “Trumpty Dumpty” who “had a great fall,” a day after referring to Ron DeSantis, who easily won a second term in Florida’s gubernatorial race, as “DeFuture.”The Wall Street Journal – which like the Post is owned by media mogul Rupert Murdoch – launched a similar attack. It called Trump “the Republican party’s biggest loser,” and portrayed DeSantis as a direct threat to the former president.DeSantis has not spoken of harboring presidential ambitions but often shows up in polls as Republican voters’ number two choice for the presidency in 2024. His anti-lockdown policies in Florida won him public support, while he has been boosted by some notable figures within the Republican establishment, including former Governor Jeb Bush, former House Speaker Paul Ryan, and neoconservative columnist David Frum.Trump publicly derided DeSantis after the election, taking credit for the governor’s narrow victory over “crack head” Andrew Gillum in 2018 and accusing him of “playing games” with the idea of a 2024 bid.
You can share this story on social media:
Follow RT on