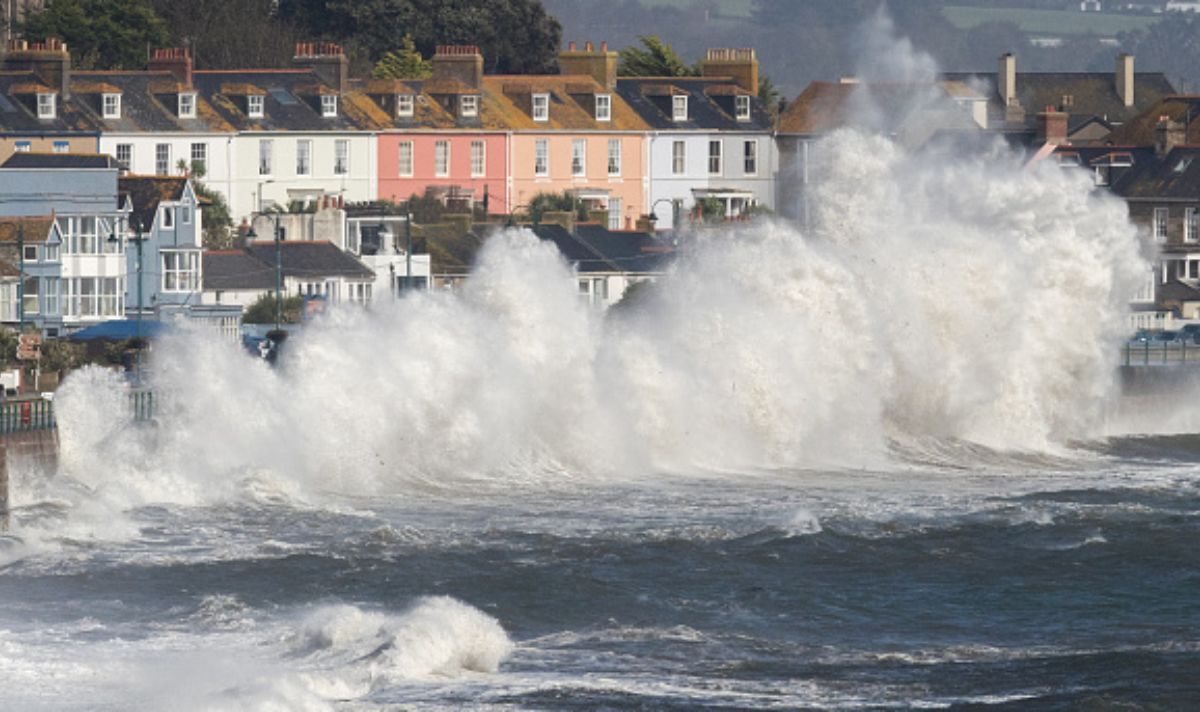 Much of the UK has been hit with sub-zero temperatures at the start of 2023 – but this may be about to change. The Met Office is predicting in its long-range forecast that the nation could be on the cusp of seeing strong gales and heavy rain on its horizon. Weather maps show the remainder of January and into the start of February looking eerily quiet beforehand – with one independent forecaster admitting this could be the sedatory period before the country’s first named storm strikes.

The Met Office’s long-range forecast, updated daily, gives a broad picture of how the UK could look for the month ahead. For its current dates, from next Monday, January 30 to February 8, it says: “Likely cloudy with occasional rain or drizzle in the south at first on Monday.

“Clearer in the north with sunny spells interspersed with a few showers, this extending south through the day. Windy in the north and east but lighter winds elsewhere. Temperatures around normal for the time of year.

“Into mid-week, frontal systems are expected to spread from the northwest. These could bring some periods of prolonged rainfall or heavier showers to the north, with the risk of gales here.

“However any wet weather weakening as the fronts move southwards. Parts of the south could remain mostly dry, while the north may see more wet and windy weather further into the period. Temperatures varying between mild, especially in the north, and cool, with a frost risk remaining.”

With all long-range forecasts, the detail can often be scant due to the fact forecasters like to be certain before pinpointing specific areas and times, something that is not possible more than a fortnight away.

But Jim Dale, a meteorologist from British Weather Services, spoke to Express.co.uk about what this could mean, depicting a scenario similar to that of last year when three named storms struck in February.

Many will remember Storms Dudley, Franklin and Eunice causing havoc across the country – with some regions suffering from devastating floods due to their wraths. While nothing of the sort is yet confirmed to return this year, Mr Dale said the narrative for this quiet period may bear some similarities.

He said: “It’s looking mostly sanguine for the first half of February. Mainly rain for north west Scotland as per, dry for much of England caused by higher pressure, fronts pushed north.

“[The storm] is a guess from them (the Met Office) but, after the calm comes the storms – the balancing affect. All to play for – and we are still waiting for our first named winter storm by the way.”

The Met Office’s long range forecast continues right up until February 23 does not rule out the prospect of more stormy conditions materialising. It says: “During this period, frontal activity and associated changeable weather conditions are likely to bring rainfall, heavy at times, especially to the north and west.”

It does appear to be a common theme that the north-west cops the brunt of the dramatic weather fronts, with the south and east described as seeing “lighter rain” during the same timeframe.

It adds: “The south and east are expected to see some lighter rain or showers at times, interspersed with some drier and brighter periods. A brief spell of more settled conditions is possible in the middle of the period, bringing a greater risk of overnight frost and freezing fog, especially under clear skies with light winds.”

The last line of the forecast will offer a glimmer of hope for anyone struggling with their soaring energy costs, as it predicts the mercury will sit slightly above average.

It concludes: “Temperatures are expected to be generally at or slightly above average, although a brief colder spell remains possible.”