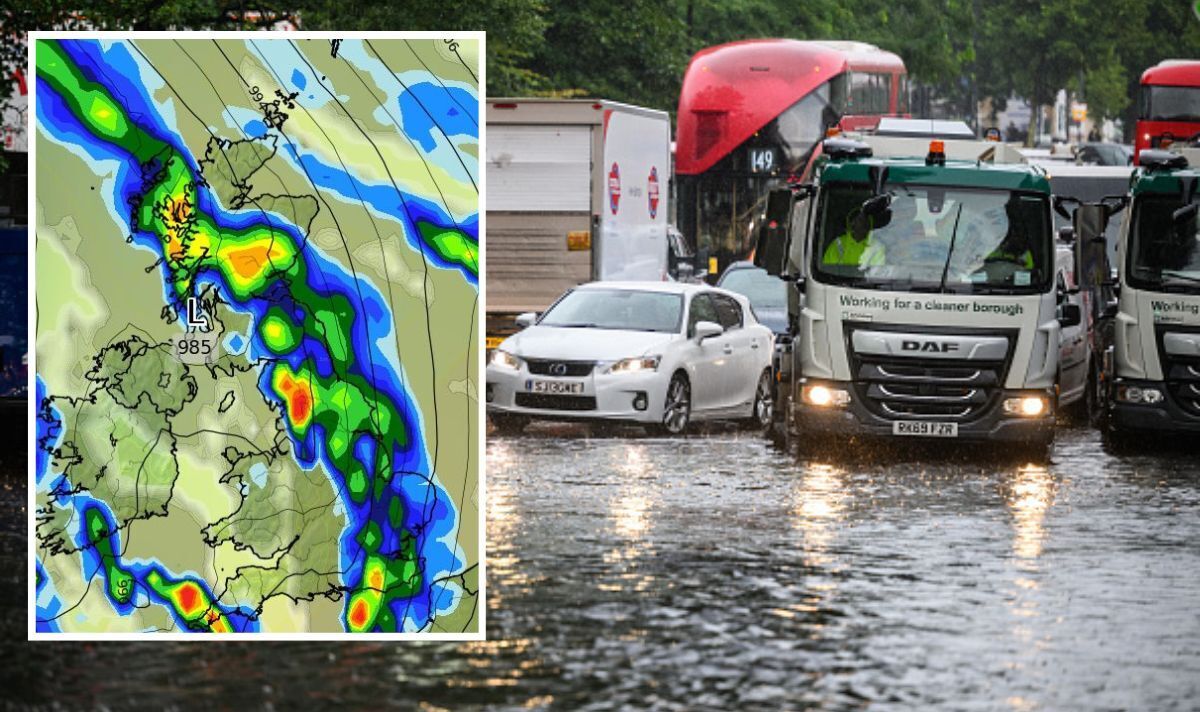 Six regions across England, Wales and Scotland are under a yellow weather warning for rain which is set to pour on much of Britain from tomorrow (November 15). The Met Office has issued two separate warnings – with one for central, western and south eastern parts of England from midnight until 1pm. In Scotland another takes hold at noon tomorrow until 9pm with “flooding of a few homes and businesses likely.” The forecaster’s statement highlighted particular areas which are set to be more adversely affected. It said: “A band of rain will move east across southern parts of England and Wales during Tuesday morning.

“Some of the rain will be heavy, with 15-30 mm of rain falling widely and as much as 40-50 mm over parts of Dartmoor and south facing high ground of southern Wales and the Marches and parts of southern England.”

It added: “A band of rain will move east across Scotland Tuesday becoming persistent across the southern Highlands during the afternoon. 20 to 40 mm of rain is likely to fall widely here with as much as 50 to 60mm over higher ground of Aberdeenshire, Angus and Perth and Kinross.”

Weather maps show a constant jet stream swirling over the country from 6am tomorrow, with the majority of the UK being hit with showers during the day. The regions covered by the warnings are; London and south east, the south west, Wales and the West Midlands.

People are to expect spray and flooding on the roads, along with bus and train services delayed. The Met Office has confirmed some businesses and homes may experience some flash flooding.

In Scotland the same warning stands – with flood water sitting on roads making for dangerous driving conditions. The Met Office advises people to avoid driving through floodwater on roads.

This is despite flood water seeming to be “shallow” when in fact it could be far deeper. If a car begins to float or aquaplane in water it could drift to deeper areas, putting lives in danger.

Flood water can also cause damage to a car’s engine, with just an “egg-cupful of water” being resposnsible for severe mechanical issues. Drivers are also reminded to keep an eye out for motorcyclists and cyclists.

Its advice says: “Remember to give vulnerable road users including cyclists, motorcyclists and pedestrians more room than usual. They are more likely to be blown around by side winds – always keep a safe distance.”

Brian Gaze, the Weather Outlook’s founder, gave his take on how this week is set to pan out – including tomorrow: “Tonight the rain in central areas peters out as it slowly clears northeastwards. A dry interlude follows it, but wet and windy conditions spread across Northern Ireland and into much of western and central Britain by the morning.

Tomorrow wet and windy weather advances eastwards over much of the UK. Brighter conditions follow, but heavy showers develop in the south west. Temperatures will be closer to the mid November norm than recently.”

He added in his blog that the rest of the week will continue with an unsettled theme. This may see more Met Office weather warnings issued as forecasters become more confident with what weather models are showing them.

In its long range forecast from this Friday, November 18 to the end of the month, the leading forecaster has predicted more autumnal weather conditions are here to stay.

It says: “Friday is likely characterised mainly by showers interspersed with clear, sunny intervals, with the west probably seeing the heaviest showers, perhaps with some prolonged rainfall here.

“The east possibly staying mostly dry in places through the day. Unsettled weather likely to remain over the weekend, perhaps with the northwest seeing the wettest conditions, possibly windy for many with a chance of gales, especially in the west.

“These unsettled conditions are likely to remain through most of the week, however there is a chance of some short lived high pressure to start the week, bringing a low risk of patchy frost by night in the north.

“Rain and strong winds likely over the second weekend, especially in the west. Temperatures possibly slightly above average initially but returning closer to average later.”