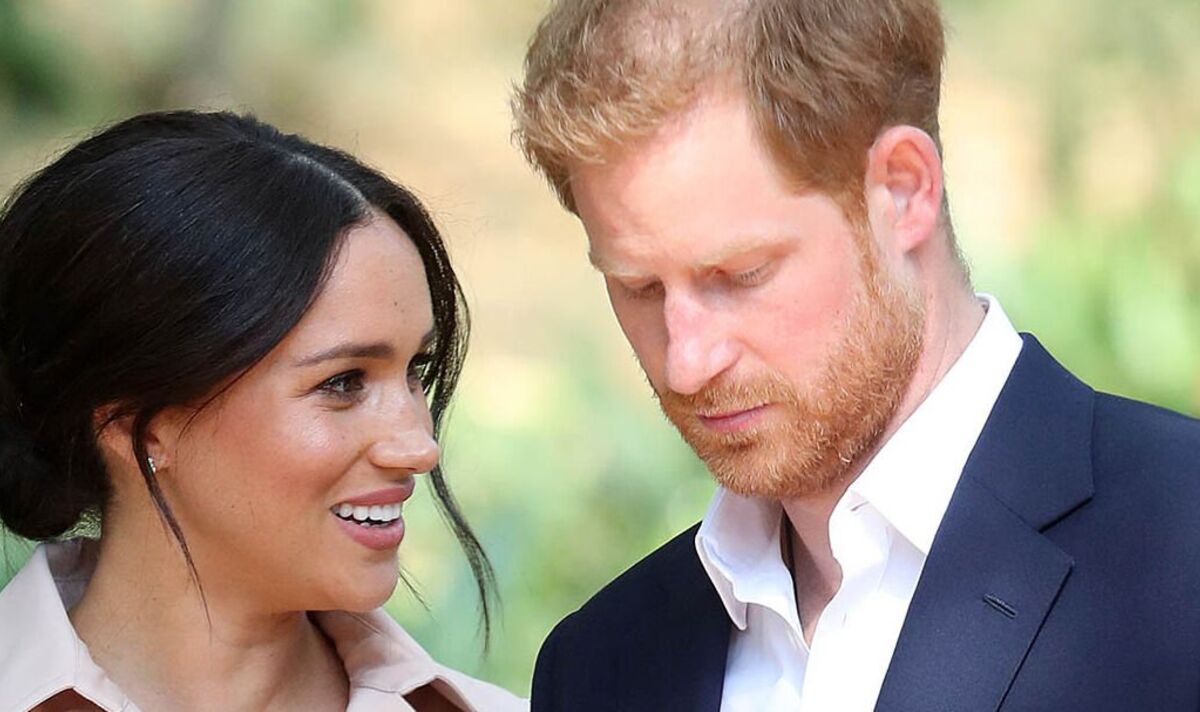 Meghan Markle and Prince Harry saw “yet another sign” they had to consider splitting from the Royal Family in December 2019, it has been claimed. Royal authors Omid Scobie and Carolyn Durand alleged in their flattering but unauthorised biography of the Duke and Duchess of Sussex Finding Freedom the decision not to include the royal couple and their son among the portraits on the desk of Queen Elizabeth II as she delivered her Christmas broadcast that year made an impression on Meghan and Harry.

Writing in their book, the authors claimed: “Harry felt as though he and Meghan had long been sidelined by the institution and were not a fundamental part of its future.

“One didn’t have to look further than the family photos displayed during the Queen’s Speech on Christmas Day.

“In the Green Drawing Room at Buckingham Palace, where the Queen delivered her address, viewers glimpsed photos of the Cambridges and their children, Charles and Camilla, Prince Philip, and a black-and-white image of the sovereign’s father, King George VI.

“Noticeably absent was a photo of Harry, Meghan, and their new baby, Archie.

“Palace sources insisted that the photos were chosen to represent the direct line of succession, but for Harry and Meghan, it was yet another sign that they needed consider their own path.”

Mr Scobie and Ms Durand also reported in their book first published in August 2020 a source claiming the now King Charles had “always included” his second son and his wife in his vision of the monarchy he would eventually lead and protect.

The line-up of portraits chosen for the last royal Christmas broadcast before the coronavirus pandemic seemed to focus the attention on the direct line of succession to the throne, excluding as a consequence the then Prince of Wales’s second son and his family.

Appearing on the BBC, historian and academic Anna Whitelock said at the time: “You could read into that that, simply, she is focused on her father and then the direct heirs to the throne.

“But certainly yes, people will read into that something. The Queen, of course, holds Prince Harry in great affection, she’s an adoring grandmother and he’s very close to her. But there’s no doubt that the Duke and Duchess have attempted to forge their own path this year.”

Prince Harry, Meghan and little Archie did feature during the broadcast, albeit not in a prominent position on the desk.

A picture taken two days after the birth of the Sussexes’ firstborn in May 2019 showing the doting parents introducing their baby to Prince Philip and the late Queen was among those shown while the late monarch was addressing the country.

Meghan, Harry and Archie were spending time privately in Canada on Christmas 2019, amid an announced six-week break from royal duties.

Husband and wife returned to England without their son in early January 2020 for a visit to Canada House in Trafalgar Square, London, where they thanked Canadians for their hospitality.

The following day, Meghan and Harry released a bombshell statement in which they announced their intention to relinquish their senior position within the Firm and carve out a progressive new role for themselves.

In a bid to alleviate the pressure of the public scrutiny they were facing, the Sussexes proposed a plan which would see them performing some royal duties while also becoming financially independent from the Sovereign Grant and living between the UK and North America.

This half-in, half-out plan was discussed by royal aides and senior members of the Firm but, according to royal author Valentine Low, the late Queen herself removed the compromise from the negotiating table.

He wrote in his book Courtiers: The Hidden Power Behind the Crown: “Crucially, it was the Queen who took the view that unless they were prepared to abide by the restrictions that applied to working members of the Royal Family, they could not be allowed to carry out official duties. One source said: ‘There was a very clear view: you can’t be in and out.'”

As a consequence, the Sussexes accepted to no longer carry out royal duties and relinquish their royal and military patronages in order to carve out a new path.