Skip to content
HomeNewsKate Middleton’s encounter with protester shows she will be ‘gutsy’ Queen, expert claims 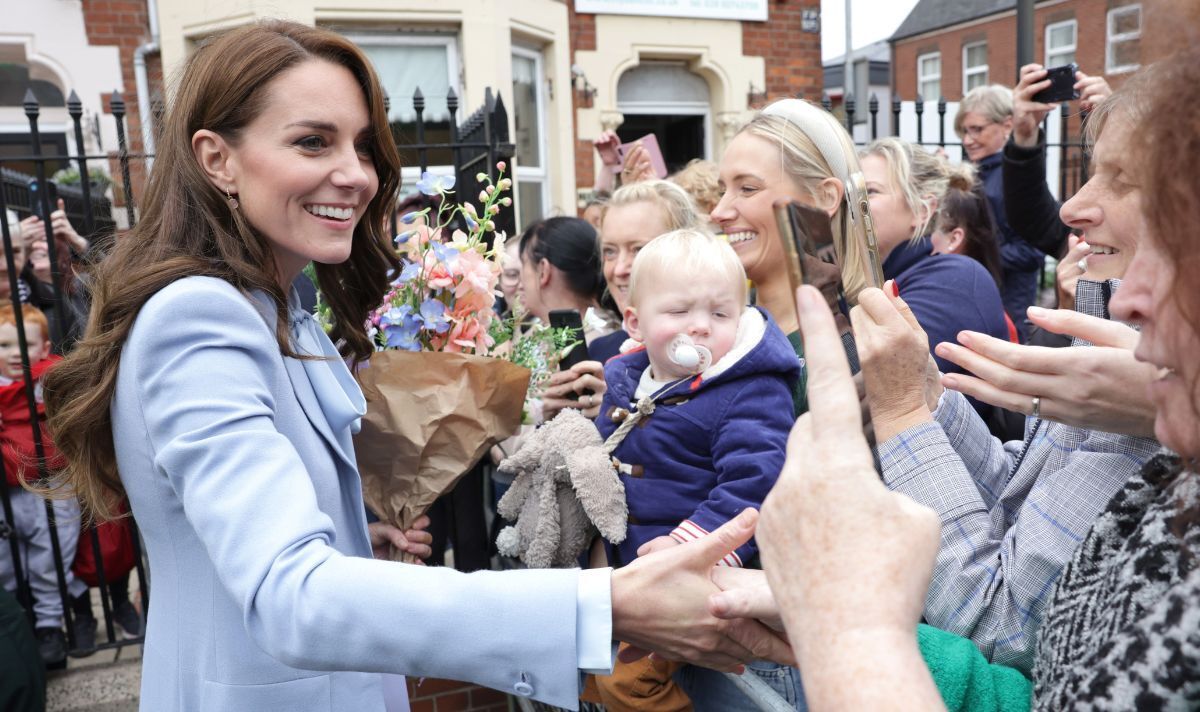 While on a trip to Northern Ireland last week, Kate Middleton encountered a protestor during a walkabout outside Carrickfergus Castle. A woman shook Kate’s hand and said: “Nice to meet you, but it would be better if it was when you were in your own country.”

The Princess did not react much other than to laugh slightly and shake other wellwishers’ hands, while the woman added: “Ireland belongs to the Irish.”

This is Prince William and Kate Middleton’s first trip to Northern Ireland since inheriting the titles of Prince and Princess of Wales following the death of Queen Elizabeth II.

However, the royal couple previously visited Northern Ireland in February 2019 for a two-day royal tour.

In an interview with the Daily Mail’s Femail Magazine, Ms James said that Kate Middleton will be a “gutsy” Queen as she was able to deal with the encounter calmly and “stood her ground”.

She said that encounter would have been “even more uncomfortable for Kate” than just listening to the protestor’s words as the woman shakes Kate’s hand while making the comments.

Ms James added: “Once she has Kate’s hand she traps it in her own, performing several quite aggressive-looking shakes while holding it tight and even pulling Kate in towards her as she does so.

“We can see Kate’s hand is held for a shake that goes on longer than usual. Her fingers have been pulled up the woman’s sleeve and her knuckles looked gripped tight enough to whiten.”

READ MORE: King Charles ‘wants his son back’ after slimmed down monarchy

Ms James claimed that the protestor intended to make Kate feel “helpless” but instead it had a much different effect as the Princess “doesn’t miss a beat”.

The body expert continued: “Instead of looking away quickly and moving on to ignore the woman dismissively, she handles the moment well by making an ‘oh’ to suggest ‘what a pity’

“Then, when her hand is released but the woman is still filming and heckling, keeping to her spot and even looking around for other hands to shake.

“The response of smiling but moving on quickly would be understandable and a typical royal move but standing your ground to show you’re not intimidated does look rather brave.”

The expert also reviewed Kate’s verbal response and claimed the Princess of Wales “heard the heckler perfectly” but kept her composure anyway.

Ms James said: “Will Kate turn out to be a gutsy queen? She doesn’t even seem to glance around for her security to either alert them or to make herself feel safer by checking they were aware.”

“She responded with charm but her lack of any other response might suggest a confident lack of fear at being challenged.”

DON’T MISS:
Prince Harry to ‘shed a lot of light on why he left’ in new book  [INSIGHT]
Queen honoured with corgi parade in tribute to monarch’s love of dogs [REVEAL]
Queen Camilla to stop ‘centuries’ old tradition’ as King slims down [REPORT]

Kate Middleton and Prince Willian visited Carrickfergus, a town north of Belfast, while on their trip Northern Ireland trip and shook hands with local school children as well as other residents.

The royal couple has a personal connection with the area as Queen Elizabeth gave Prince William and Kate the titles Baron and Baroness Carrickfergus on their wedding day in 2011.

The Prince and Princess of Wales expressed gratitude on social media following the trip, and wrote on Twitter: “Thank you for having us, Northern Ireland!”

The couple also posted a video highlighting the trip, which included footage of Kate making a cocktail and Prince William playing with dogs.

Royal fans praised Kate Middleton for how she handled the protestor on social media, with one commentator writing: “That very disrespectful lady should have stayed at home instead of wasting her time waiting for someone she doesn’t like… Catherine handled the moment perfectly though.”