Skip to content
HomeNewsJust Stop Oil activists dragged off road as drivers hit out: ‘How are you saving planet?’ 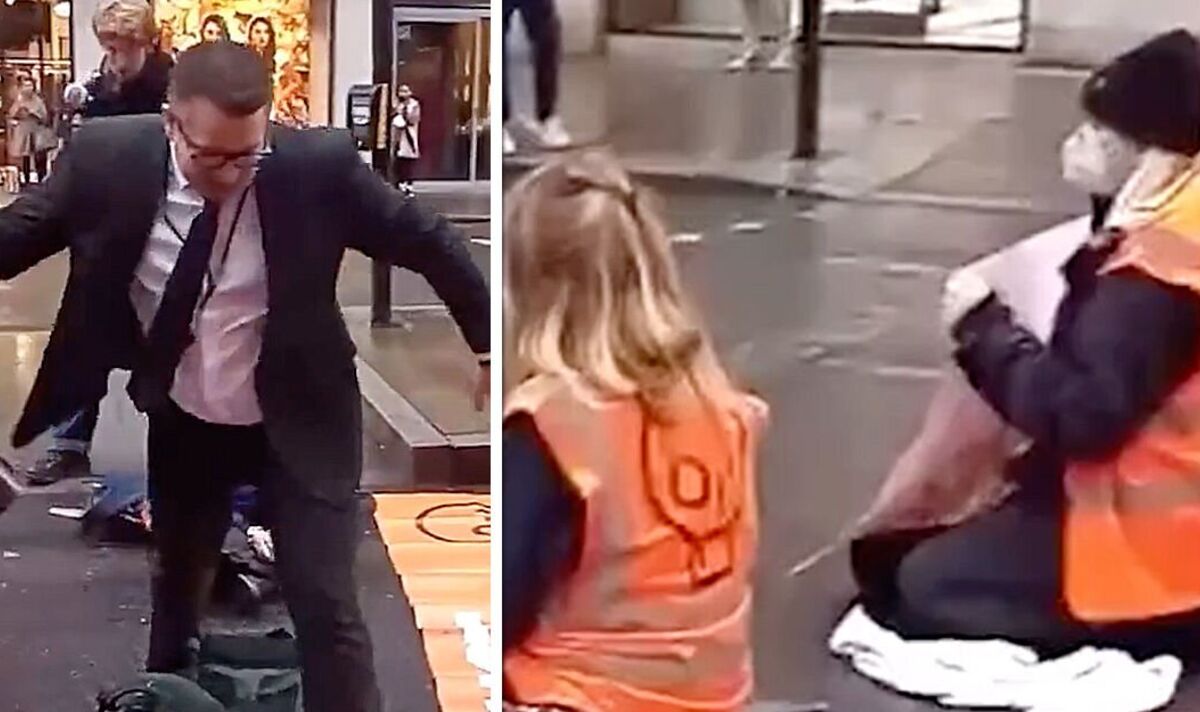 Just Stop Oil launched another day of demonstrations across London, bringing Knightsbridge to a standstill as activists sat in the middle of the road with banners advertising their organisation. Commuters have been growing increasingly frustrated with the protesters, with footage emerging of drivers taking direct action to remove them and end the disruption. Video from central London showed one driver in a suit hitting out at the sitting activists as he proceeded to removed their banners and then proceeded to drag one of the activists to the pavement.

One activist could be seen following the man around and discussing the “climate emergency” the world is facing.

But the man was undeterred and continued to remove both banners and protesters to allow waiting drivers to pass by.

The man could be heard saying: “People have got places to be instead of f****ng around.”

JUST IN: Speaker launches investigation into Commons fracking scrum which left some MPs in tears

One further commuter then walks on camera, removing one of the banners and addressing one of the protesters with a series of blipped-out expletives. He is then seen grabbing a man by the shoulder and pulling him towards the pavement.

And a man in a hoodie standing by the side of the road joined the push back asking the Just Stop Oil activists, “how are you saving the planet?’ as he pointed at the backed-up cars idly waiting to be let through.

The traffic blockade was launched after Just Stop Oil activists spray-painted the windows of luxury department store Harrods in Knightsbridge.

Just Stop Oil said 20 activists were involved in the disruption, with the organisation sharing footage of two of its members dousing the shop in paint.

In a Twitter thread, the climate emergency group reiterated its demands for the Government to halt all new licencing for gas and oil extraction.

They said: “Our Government is criminally incompetent & morally bankrupt. They are actively seeking to accelerate fossil fuel production, which will kill millions of people while failing to address the worst cost of living crisis this country has ever seen.”

Additional footage shows Harrods security removing the two activists who spray-painted the department store’s windows as they filmed a video message for their supporters.

Just Stop Oil pledged its members will continue to carry out disruptive actions to pressure the Government into caving to their demands until the end of October.

A spokesperson for the group said: “We are going to be on the streets until the end of October, and what happens after that is an open question. We don’t have any plans to stop.”

Earlier in the week, the organisation caused misery for commuters in the Dartford area as two activists caused the Queen Elizabeth II bridge to be shut down after climbing atop it.

And the Met Police arrested 17 people on Wednesday after they glued themselves on the A4 at the junction between Cromwell Road and Exhibition Road in central London.