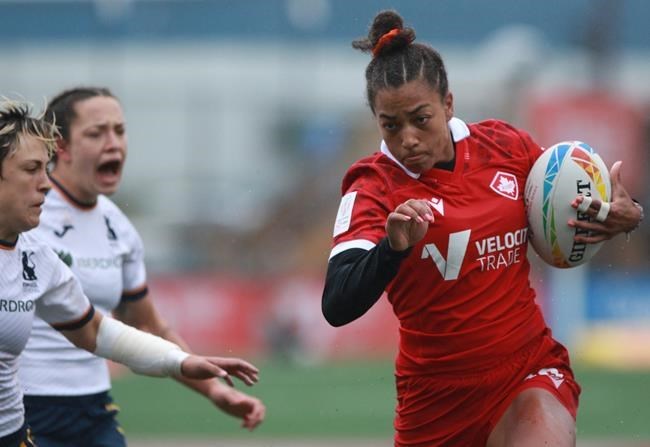 LANGFORD, B.C. — Canada got the start it was looking for at HSBC Canada Women’s Sevens event as the host side opened up with a pair of wins at the 12-team event.

With a small but vocal fan base at the morning 19-10 victory over Spain that grew to a larger, more boisterous gathering by a mid-afternoon 43-0 thrashing of Mexico, Canada set up an anticipated evening matchup against No. 1-ranked Australia.

After a more than two-year absence from its home base at Starlight Stadium due to the COVID-19 pandemic restrictions, Canada looked a little nervous to start.

It led 7-5 at the half against Spain as Keyara Wardley recorded the home side’s first try in the first four minutes. Captain Breanne Nicholas added her first of two conversions.

Marla Calvo responded immediately for Spain and the opponents then struck for their first lead of the game with a try from Lea Ducher following the halftime break of the quick 14-minute affair to assume a 10-7 lead.

“A bit nervy,” Canadian coach Jack Hanratty said of the start. “For us we wanted to make sure we were comfortable in chaos and there was a lot of chaos today with the rain and everything. Then those six minutes of the second half we looked very comfortable.

“There were a few nerves at the start, and I think that was just having a crowd again. The hairs were going on my arms and the back of my neck, so I can’t imagine how the players were feeling.”

Having to face a weaker Mexico side in the afternoon, Canada knew it needed a good result in the morning if it wanted to carry through to quarterfinals on Sunday. The top two teams in each of the four-team pools would advance, along with the top two third-place teams, based on records and points for and against.

With a date against stubborn Australia upcoming, two wins would push Canada through.

“A 100 per cent,” Hanratty said of the early must-win scenario against Spain, which has become somewhat of a rival for Canada. “We always knew this one was going to be crucial. What we would love to do is set up an encounter with the No. 1-ranked team in the world tonight in front of this crowd and I’m sure they (the fans) will be in good form by the end of the night.”

Against Spain, veteran Bianca Farella put Canada up for good on a brilliant run from midfield after dummying a pass out wide and cutting inside for the lengthy score. Nicholas converted for the 14-10 lead and Canada never looked back. Wardley added her second try with under two minutes remaining to clinch the victory.

“I think every game we’re getting more excited, so we’re getting pumped up to give it our all,” said Scurfield, a Canmore native who had her father Al in the crowd after he drove in from Alberta the night before. “We’ve been looking forward to this tournament with the home crowd, hoping that the energy can lift us to the quarterfinals and hopefully take us through the tournament.”

Canada, Australia, Spain and Mexico are in Pool A. Ireland, France, Brazil and Japan form Pool B and England, the United States, Fiji and New Zealand make up Pool C. Should Canada lose to Australia, it would likely face another strong side in New Zealand.

Asked what it would take to upset Australia, Hanratty stated: “We have to maintain possession. For most of this match (against Mexico) we did that. If we do that against Australia, we’ll find ourselves in the fight.”