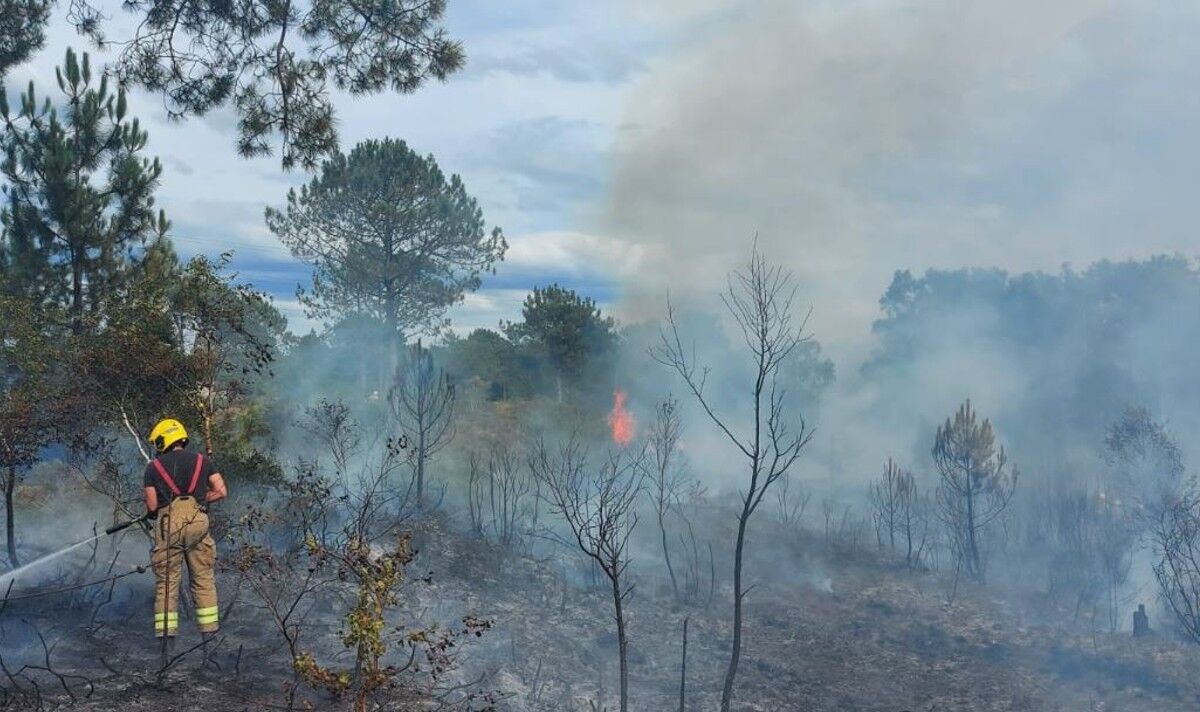 The large wildfire was reportedly being tackled by 60 firefighters and measured 100 metres by 100 metres. Dozens of firefighters are at the scene continuing to battle the blaze.

At 4.54pm, Doset and Wiltshire Fire and Rescue Service tweeted that approximately 60 firefighters remained at the scene “working hard to bring fire under control”.

It said: “Approximately 60 firefighters are now on scene dealing with the incident which involves 2 hectares of heath. Firefighters are working hard to bring the fire under control but we’re still asking everyone to avoid the area.”

A spokesperson for Dorset & Wiltshire Fire and Rescue Service added: “We were called to a fire on Upton Heath at 2.28pm this afternoon.

“We now have crews in attendance from Redhill Park, Westbourne, Wimborne, Springbourne, Christchurch, Bere Regis, Ferndown, Poole (x3) and Blandford, together with small 4×4 appliances from Wimborne, Hamworthy, Christchurch and Blandford, the Unimog from Wareham, water carriers from Ringwood and Poole, and a support appliance from Dorchester – approx. 60 firefighters.

“We are dealing with an area of around 100m x 100m that is well alight, and ask that local people avoid the area.”

The fire service tweeted earlier: “Please avoid the area where possible – if you’re a local resident and concerned about the smoke, please close windows and doors.

“We will update you as we have more details.”

Dorset Police also confirmed they were at the scene.

A spokesperson said: “We were called at 2.22pm on Thursday August 4 to a report of a fire on Upton Heath near Poole. Officers are in attendance assisting with a road closure.”

The fire service has warned that the dry weather has created the perfect conditions for wildfires.

Group Manager Dave Waters said: “The lack of rain means the ground is really dry, and any fire will spread even more quickly than usual as a result.

“The risk is as great in your garden as it is on a heathland but taking extra care, and perhaps doing things a bit differently to usual, can make a huge difference to staying safe.”

Others took to Twitter to comment on the aftermath of the fire, Brian Bleese chief executive at Dorset Wildlife Trust said the fire had a “dreadful impact on wildlife”.

He said: “Sad aftermath of a large fire on Upton Heath, still smouldering. Dreadful impact on wildlife but major disaster averted thanks to quick action by @DWFireRescue – extra vigilance by everyone needed in these ultra dry conditions.”

Mr Beele also tweeted pictures of the aftermath of the blaze which showed large areas burnt and still smouldering.

He said that it was likely the fire service would have to remain at the heath for some time to make sure the blaze was fully extinguished.