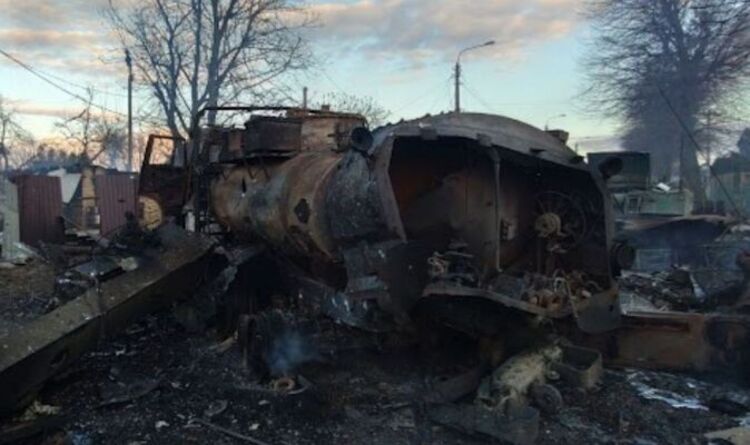 Ukraine’s army is believed to have reclaimed control of the town, which is located just outside of Kyiv, but it has already been devastated by fighting and relentless Russian shelling.

He said the streets are littered with corpses after bombardment by Russia’s army before Ukraine’s troops “liberated” the town and Russia withdrew its forces.

It comes as Russia is said to have withdrawn its troops from several towns near Kyiv in recent days after Moscow’s bid to encircle the capital failed.

On Saturday, at least 20 bodies of men dressed in civilian clothes were found strewn across one single street in Bucha after Ukraine recaptured the town.

READ MORE: Russia cracks down on protests as rallies spring up against war

However, at the same time Russia claimed that 1,351 of its troops had died fighting in Ukraine, while a Nato officer has estimated between 7,000 and 15,000 Russian deaths.

On Thursday, mayor Anatoliy Fedoruk said March 31 “will go down in the history of our town… as the day of its liberation from Russia”.

He thanked Ukraine’s Armed Forces for liberating the city which has been occupied by Russian forces since February 27, just three days after the invasion first began.

It comes after Moscow claimed it would reduce military activity near Kyiv and the city of Chernihiv to encourage trust talks between Russia and Ukraine.

However the mayor of Kyiv said the bombardment of satellite towns near capital was ongoing.