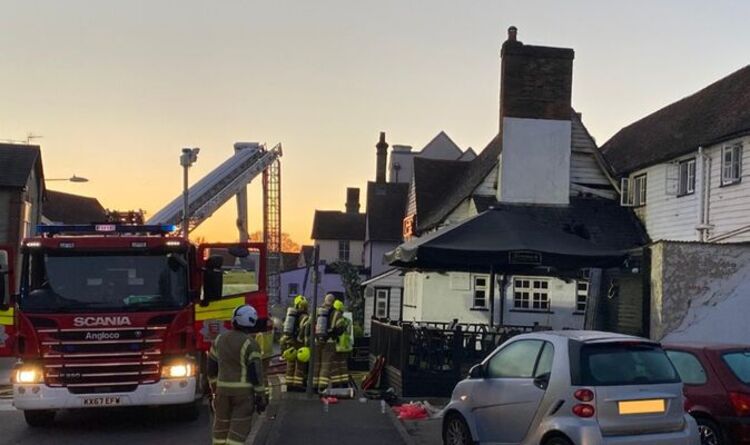 The fire broke out just after 4am this morning, beginning on the roof of the property. When fire crews arrived, 25 percent of the building was alight.

Firefighters confirmed they had arrived on the scene at 5.45 am at Fore Street, Old Harlow.

Essex County Fire and Rescue Service warned that those commuting in the area on Thursday should take extra care and avoid the area near the fire.

They said many of the nearby roads to the scene would be closed throughout the morning.

They added that the priority was securing the scene before launching an investigation into the cause of the fire.

James Taylor, Group Manager at Essex County Fire and Rescue Service, said: “Right now, we’re working hard to get the fire under control – so for safety reasons many of the nearby roads will be closed this morning.

“We are likely to be here for some time making the scene safe before completing a fire investigation to understand the cause of the fire.

“With that in mind, please avoid the area if you’re planning to travel this morning and allow extra time to your journey if you live or work nearby.

“Thank you for your co-operation.”

READ MORE: Illegal migrants trying to enter UK will be sent to Rwanda for process

By 6:30am the fire was under control, the authorities confirmed.

However, roads close to the scene of the fire will remain closed throughout Thursday morning.

The building has avoided significant damage, according to the fire service.

Fire crews used an Aerial Ladder Platform to elevate firefighters above ground level, which Essex Fire Service said was used “to support the cutting away of the roof to access and extinguish remaining hotspots within the structure”.

They said that once the scene “has completely cooled, we’ll carry out a fire investigation into the cause”.