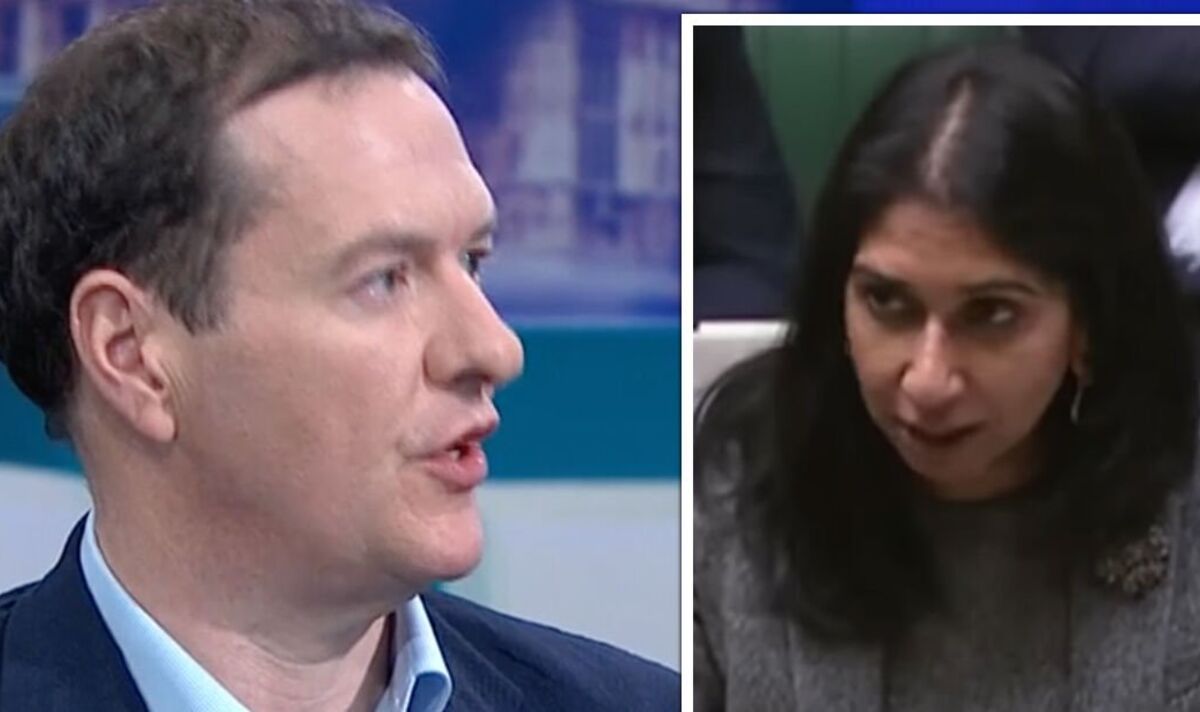 George Osborne said Number 10 has calculated Suella Braverman could cause further disruption because of the criticism she has been facing and could be forced to step down once more. Ms Braverman has been facing questions over accidentally sharing private Government information with a third party through her private email and also over the questionable conditions migrants being processed in the UK have been left in. Speaking to The Andrew Neil Show, Mr Osborne suggested Rishi Sunak‘s Number 10 would not perceive a potential loss of Ms Braverman as overly concerning.

The former Chancellor said: “Well, I think they probably made a calculation in Downing Street that she’s going to blow up – and that’s fine by them because, you know, she’s no fan of theirs and they’re no fan of hers.

“But there is collateral damage, as you’re trying to relaunch the Conservative Party as a fresh, not just an economic offer but an ethical offer because Sunak is an antidote not just to Liz Truss, but also to Boris Johnson.”

He added: “Tories do think, Tory MPs think they’re back in the game. And we’ve discussed it before on this programme – Labour have not sealed the deal – and that leaves open this chink of light, which the Tories are now looking it.”

Mr Osborne also suggested the Prime Minister’s performance during his first exchange with Sir Keir Starmer at this week’s Prime Minister’s Questions signalled “normality had to some degree returned.”

“You know, competitive Westminster politics was back, a sense of sanity had returned to the Conservative Party.

“The Government felt like, you know, normality had to some degree returned. We’ll see if all of this endures.”

Mr Osborne added: “And I very much agree with what you’ve [Andrew Neil] just said – that system worked. Essentially, the clowns were asked to leave the stage. I use the plural there advisedly.

READ MORE: Outrage as Truss to ramp up cost of unelected Lords by handing out resignation honours

“And Rishi Sunak: I think a very sensible, interesting Prime Minister is now in charge. He’s only got two years, you know? And I think he’s correctly not made the mistake, actually, of Liz Truss and others, which is to think he’s got some big mandate.

“He knows he hasn’t got a mandate; he was actually the loser in the most recent leadership election this summer. But that kind of humility, that kind of, ‘I’ve got to earn the trust, I’m not assuming anything’, I think it is exactly the right start.”

The Labour Party has demanded the Government publish its assessments of the Home Secretary’s sharing of a sensitive document with a Tory backbencher from a personal email without permission.

Ms Braverman was reportedly previously investigated by Government officials after the leaking of a story involving the security services.

The Daily Mail reported that MI5 played a role in the inquiry after the leak at the time Ms Braverman was attorney general sparked “concern” in the security service.

And Ms Braverman is also finding herself at the centre of a heightened debate around immigration monitoring and processing practicises in the UK.

On Sunday, a man attacked a centre for processing migrants in the port city of Dover before killing himself.

Kent Police said in a statement: “Officers established that two to three incendiary devices had been thrown into a Home Office immigration premises.

“One minor injury has been reported. The suspect has been identified and located. Enquiries into the incident remain ongoing.”

The Government has been facing criticism that border controls are too weak, while charities and human rights groups say asylum seekers are being treated inhumanely.

Reports released over the weekend suggested Ms Braverman’s decisions had led to overcrowding and outbreaks of scabies and diphtheria at a different migrant processing centre in Kent, citing multiple government sources.