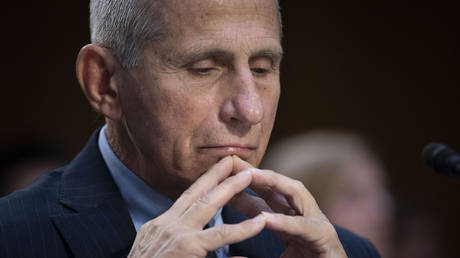 The White House’s chief medical advisor, Anthony Fauci, and other senior officials are set to be deposed under oath as part of a lawsuit claiming the government worked alongside social media platforms to create a “massive censorship enterprise” throughout the Covid-19 outbreak.
In a Friday ruling, Judge Terry Doughty granted a joint request from the attorneys general of Missouri and Louisiana to compel several current and former officials to testify in the suit, among them Fauci, ex-White House press secretary Jen Psaki, Director of White House Digital Strategy Rob Flaherty, Surgeon General Vivek Murthy and two high-level figures from the FBI and Department of Homeland Security (DHS).
“After finding documentation of a collusive relationship between the [Joe] Biden administration and social media companies to censor free speech, we immediately filed a motion to get these officials under oath,” Missouri AG Eric Schmitt said in a statement. “It is high time we shine a light on this censorship enterprise and force these officials to come clean to the American people, and this ruling will allow us to do just that. We’ll keep pressing for the truth.”

While the defense insisted that senior officials can only be called to testify about their actions in office under “extraordinary circumstances,” Judge Doughty said the personnel in question met that standard. He added that the two GOP-led states “have proven that Dr. Fauci has personal knowledge about the issue concerning censorship across social media as it related to Covid-19,” ordering him to cooperate with a deposition.
Requests to depose the other officials were granted on similar grounds, as the judge concluded all either held direct meetings with social media firms about the purported censorship, or had close knowledge of those discussions.
Jen Easterly, who heads up the DHS’s Cybersecurity and Infrastructure Security Agency (CISA) was also ordered to testify. She played a “central role” in “flagging misinformation to social-media companies for censorship,” the plaintiffs argued, describing the cyber agency the “nerve center” of “the federal government’s efforts to censor social media users.” The same official was said to be involved in the DHS’ now-defunct ‘Disinformation Governance Board’ – dubbed the ‘Ministry of Truth’ by critics – which would have created a new mechanism to facilitate cooperation between the White House and social media sites.

Americans censoring themselves on Covid, race and abortion – survey

Initially filed last May by Schmitt and  Louisiana Attorney General Jeff Landry, the lawsuit claims the federal government encouraged online platforms to censor, delete or ban certain speech about the pandemic, including discussion of the “lab leak theory of Covid-19’s origin,” as well as questions about the effectiveness of face masks, vaccines or lockdown policies, among other issues. The two AGs have largely relied on documents obtained through subpoenas of YouTube, Twitter and Facebook’s parent firm Meta, which detail regular communications between the government and social media sites.
The White House, as well as the eight officials ordered to testify, have yet to comment on Friday’s ruling. The depositions must take place within 30 days of the order, though it remains unclear whether the defense intends to appeal the decision.