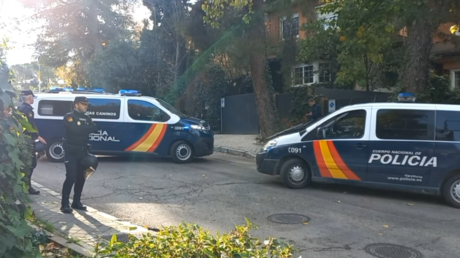 One employee at the Ukrainian embassy in Madrid was injured on Wednesday after a letter he was handling exploded, Reuters reports, citing Spanish police. The staff member has reportedly suffered only light injuries and has attended hospital.The blast occurred at 1:17 pm local time and was reported to Spanish authorities by the embassy itself, according to Europe Press. Local law enforcement have now cordoned off the area around the building as canine units are working on the scene. Anti-terrorist protocols have also been activated throughout the city, the outlet reports.A Spanish government official has told local media that an investigation into the incident has been opened by the National Police and that the embassy worker, who is believed to be a Ukrainian national, has only suffered a minor injury to the finger of his right hand.Telemadrid reports that police sources have indicated that the envelope was addressed to the Ukrainian ambassador and contained a small homemade explosive that was not picked up by the embassy’s security services.Ukraine’s embassy to Spain has yet to release an official statement on the incident.
You can share this story on social media:
Follow RT on