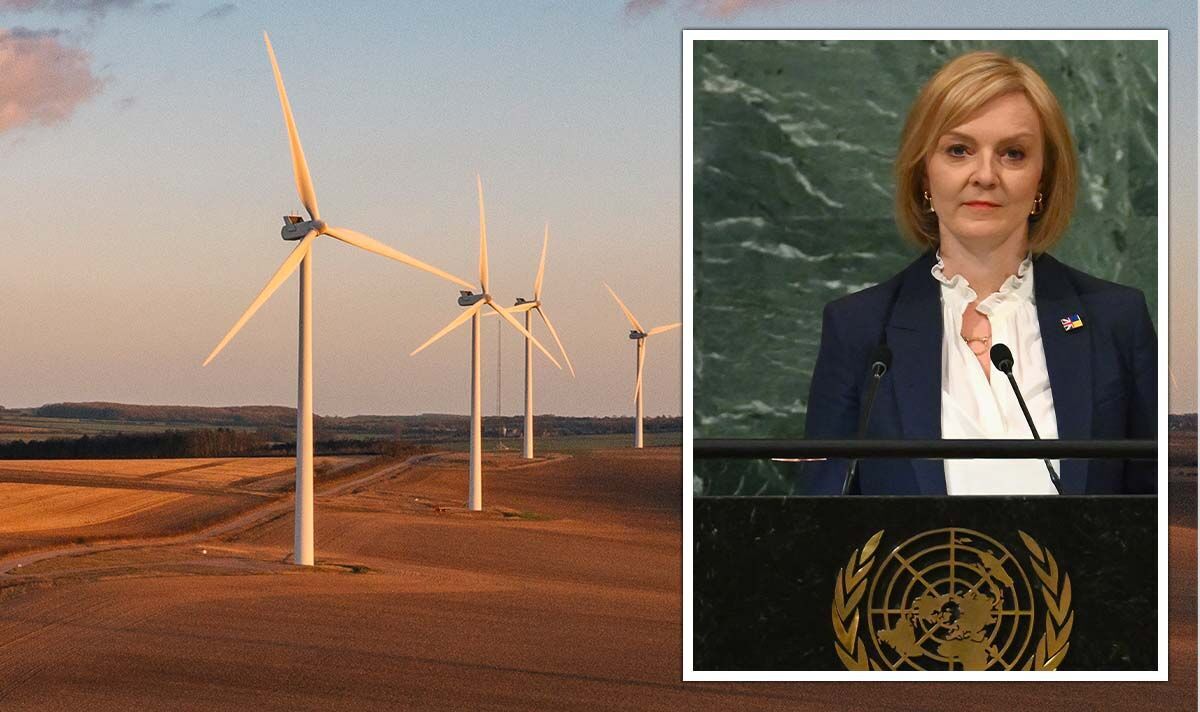 The UK could receive a huge energy lifeline amid a crisis that has seen bills soar for millions of Britons thanks to plans for a new £40million project that could help the country wean itself off expensive gas imports. South Lanarkshire Council has granted planning permission to developers Banks Renewables to build a £40million wind farm consisting of six large turbines at Mill Rig Wind Farm near Darvel in Scotland.

The turbines will be able to power around 21,000 homes with a capacity of 36 megawatts and are “on course” to become operational within three years, according to Banks Renewables.

The firm, based in Hamilton, is hoping to set up a local community fund which it claims could generate a staggering £5.4million in revenue over the predicted 30-year lifetime of the project.

The local area is also expected to benefit from £11.7million worth of local contracts during construction, the firm has claimed.

Robin Winstanley, sustainability manager at Banks Renewables, said: “With the next steps of detailed design and construction, Mill Rig Wind Farm is on track to help Scotland achieve its ambitious net zero targets, bolstering the UK’s energy security by producing green electricity by 2025.”

This comes as the UK is scrambling to wean itself off foreign gas after Russia’s war in Ukraine and while its slashed supplies to Europe sent wholesale costs soaring. While Britain only got four percent of its gas from Russia last year, Putin’s cuts have sent shockwaves through the global markets, and much of the gas that the UK imports have skyrocketed in cost, having a huge knock-on impact on UK households.

This is why the Government have stressed the importance of the UK boosting its own homegrown supplies, ramping up its energy security while supplies threaten to plummet amid Europe’s crisis.

In fact, the UK’s energy security strategy aims for the nation to deliver up to 50 gigawatts of offshore wind by 2030, even claiming that Britain “will be the Saudi Arabia of wind power”.

But while offshore wind receives a lot of support, onshore turbines have sparked some controversy. For instance, new energy minister Jacob Rees-Mogg has previously said that he would prefer his voters to have cheap energy “rather more than I would like them to have windmills”, referring to onshore wind turbines.

READ MORE: Truss ends rationing fears with vow to stand up to Putin

But the Business Secretary’s view on the matter may have changed, after claiming that the UK should ” explore all avenues available to us through solar, wind, oil and gas production” to avoid Russia’s “weaponisation of energy”.

Green campaigners have also appeared to be concerned with Prime Minister Liz Truss’ stance on renewable energy, given her comments on solar farms. She said at a hustings meeting in Exeter that  “our fields shouldn’t be full of solar panels”.

Environmental group Friends of the Earth said following Ms Truss’ electoral victory: “The next Prime Minister must unlock the UK’s full renewable power potential by removing the unfair planning barriers to onshore wind and scrapping the limit which restricts the quantity of solar and onshore wind projects that the government will support.”

It comes amid claims that the rollout of onshore wind is hamstrung by planning restrictions, preventing the UK from unlocking more clean energy which could power thousands of homes.

RenewableUK’s CEO Dan McGrail said: “Now is the time to end the block on onshore wind development in England and set a new target for the sector.

“We know onshore wind projects can be up and running within a year of approval, providing the country with much-needed low-cost clean energy, so we’re urging Liz Truss to pull out all the stops to encourage new projects to go ahead in areas where they have local support.

“Industry wants to work with Government on our plans to break the link between the exorbitant cost of gas and the price of electricity. It will enable billpayers to benefit more from the vast amounts of low-cost electricity being generated by wind and other renewables, by no longer allowing gas to call the tune in the energy market.”

And while there were concerns that Ms Truss may not be open to more wind power in Britain, the Prime Minister has claimed that she will be “bold enough to lift the embargo on onshore wind power”.