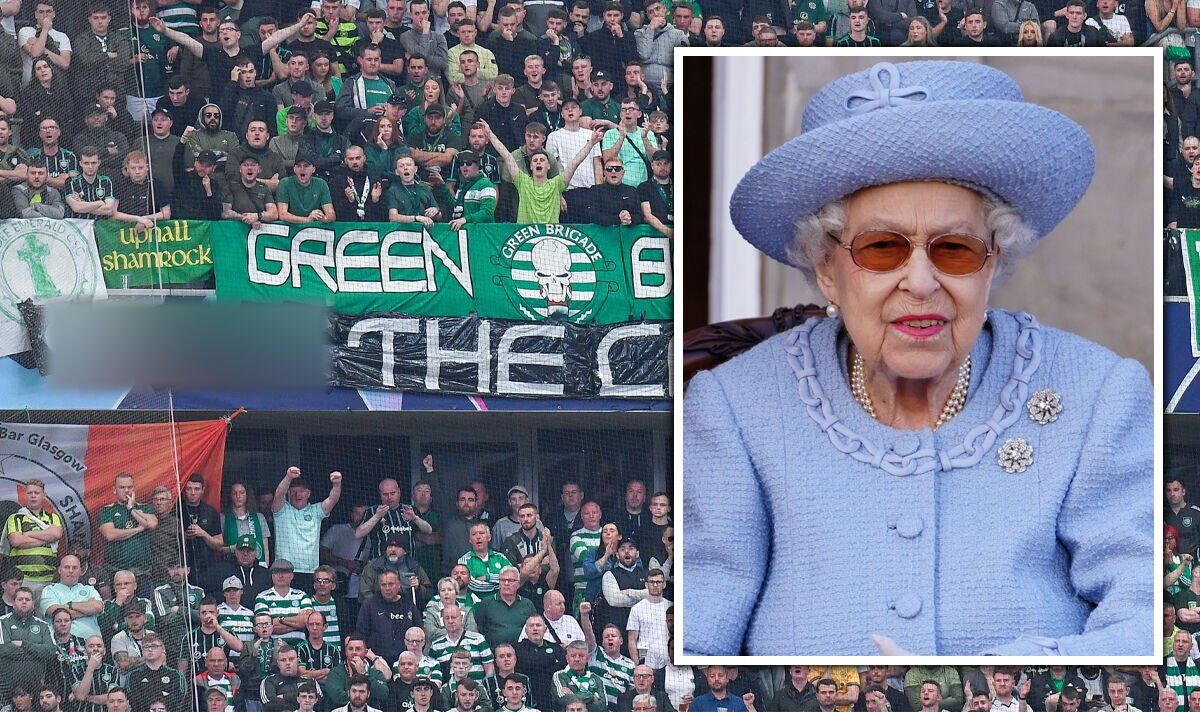 Celtic fans have caused outrage after holding signs saying “f*** the Crown” at their Champions League match against Shakhtar Donetsk. All UK teams playing home or away were permitted to hold a one-minute silence as a mark of respect for the Queen.

However, the Celtic match featured no minutes silence in Poland, and in the early stages of the game, a banner in the Celtic end was unfurled that read “F*** the Crown”.

Another banner said “Sorry for your loss Michael Fagan”, a reference to the intruder who broke into the Queen’s Buckingham Palace bedroom in 1982.

The away fans also chanted “If you hate the Royal Family, clap your hands” during the game in Warsaw.

Both Celtic and Shakhtar Donetsk players wore black armbands in tribute to the Queen, and the Ukrainian club were granted permission to display anti-war messages on screens at Legia Warsaw’s stadium.

“Among their foul abuse, they held up a banner praising the intruder who entered Her Majesty’s bedroom at Buckingham Palace.”

User @Lilly4505 added: “Absolutely disgusting, they have let down the ppl that made scottish ppl hold their heads high.

“So shameful but those supporters wouldn’t know what shame is bc they have no respect for themselves.”

Other Twitter users voiced their anger at Celtic, with @spyrobiro saying: “By no means is this a surprise. A vile club supported by awful fans.”

User @LostCuriously added: “What a shame after Scotland showed so much love and demonstrated so much dignity earlier on.

“They had their few seconds of fame #Disgraceful.”

Another user, @rook_reyne, noted: “It’s the Green Brigade what do you expect? They sing songs about the IRA as well. A lot of them like to pretend that they are Irish.”

Rangers fan @DavieBadger also said: “We have to put up with their hatred constantly here.

“The last old firm game they were signing about dead rangers players in their thousands. A truly disgusting fan base.”

In return, Celtic fan @elizabethc78 fired back: “From the fanbase that sing about being up to their knees in fenian blood every week. Pretty disgusting is it not?”

Meanwhile, Rangers fans sang the national anthem before their Champions League Group A tie against Napoli at Ibrox.

UEFA had rejected requests from Chelsea, Manchester City and Rangers to play the national anthem before Wednesday’s Champions League matches.

However, Rangers had indicated before the game on their official Twitter account they would go ahead with a “rendition of the national anthem.”

Around 50,000 fans were invited to sing the national anthem after the minute’s silence and there was also union flag display in the Broomloan Road stand along with a banner which read ‘1926 Her Majesty Queen Elizabeth 2022’.

Only Rangers supporters were in attendance for their match against Napoli which was moved from Tuesday to Wednesday due to policing resources surrounding the Queen’s death, with no away fans being permitted at the match in Naples in return for sporting integrity.