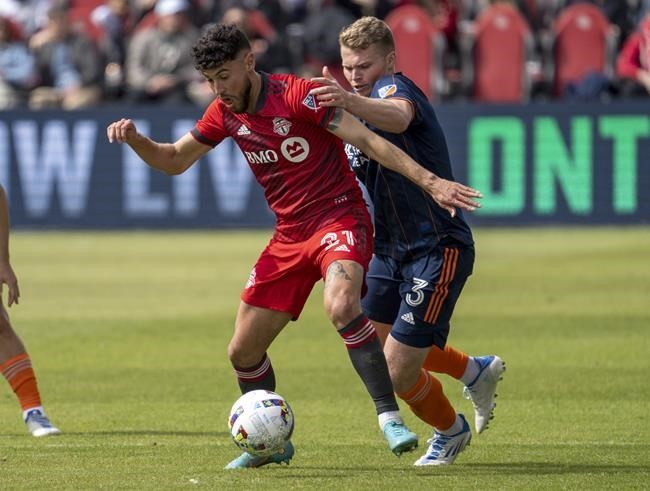 TORONTO — One step forward, two back for Toronto FC.

Toronto dug itself a hole with some sloppy defending Saturday before mounting a late charge that fell short in a 2-1 loss to injury-ravaged FC Cincinnati.

Ian Murphy and Luciano Acosta scored for Cincinnati before an announced crowd of 23,591 on a sunny 12-degree Celsius afternoon at the lakefront. Jesus Jimenez scored his seventh of the season for TFC, whose three-game home win streak was snapped.

The victory was the first in three career visits to BMO Field by Cincinnati, which has won just 17 games in its four MLS seasons — with three of those coming against Toronto.

Saturday’s contest was no thing of beauty. Cincinnati only had two shots on target (to Toronto’s three) but took advantage of what TFC gave it.

Asked if his side had made life difficult for itself, Toronto coach Bob Bradley replied: “We did for sure.”

“The tempo was too slow which played into Cincinnati’s game plan. We didn’t move the ball fast enough, didn’t get forward quickly enough.”

“Those are two poor goals to give up today,” he added. “(We had) a push late in the game. It’s a little bit too crazy the way we’re trying to get the next goal. So yeah there’s a lot of things to look at.”

“As a team I still feel that we’ve got to be more consistent,” said Bradley. “So finding the right way to get our best guys playing at their best levels, that’s one of the most important aspects of building a good team.

“I think we’ve have had moments this year where that’s been going in a good direction but I still think overall that’s our biggest challenge.”

While the team has shown flashes of attacking flair, it has often been an adventure in defending.

Toronto was coming off a 5-4 loss to New York City in a wild game at Citi Field that saw TFC pull ahead 2-0 only to concede the next five goals. TFC has yet to keep a clean sheet this season. Its last league shutout was 18 games ago — a 0-0 draw at Colorado last September.

Cincinnati was winless in its previous four league games (0-3-1), but two of those losses — against CF Montreal and Los Angeles FC — were by one goal and it did beat the Pittsburgh Riverhounds 2-0 in U.S. Open Cup play during that run.

Cincinnati came into the game with just three wins in its previous 33 league outings (3-22-8) dating back to July 2021. One of those victories was a 2-0 decision over Toronto last September.

Murphy, a rookie defender, put the visitors ahead in the 44th minute. The play started when Mexican centre back Carlos Salcedo’s attempted pass to goalkeeper Alex Bono squibbed out of play. The ensuing corner went deep to Cincinnati’s Junior Moreno, who drove it back into the box.

Former TFC defender Nick Hagglund rose high and headed the ball to an unmarked Murphy, who chested the ball down and fired it past Bono for his first career MLS goal

It was more proof of TFC’s difficulties defending set pieces this season.

Acosta doubled the lead in the 52nd minute when Toronto failed to defend a throw-in in its own end. With Dominique Badji occupying several Toronto defenders, the ball landed at the feet of an unmarked Acosta whose shot beat Bono to the corner.

Jimenez cut the lead to 2-1 in the 65th minute as Toronto pressed. After Cincinnati failed to clear the ball, Michael Bradley’s cross found defender Shane O’Neill, who headed the ball over to Jimenez. The Spanish striker, who had been a bit player earlier in the game, acrobatically twisted his body to get a foot to the ball.

Toronto forward Ayo Akinola came off the bench in the 74th minute, his first appearance since injuring his knee last July playing for Canada at the Gold Cup.

Obinna Nwobodo, Cincinnati’s new designated player, made his MLS debut off the bench in the 67th minute. The Nigerian midfielder arrived this week from Turkey’s Goztepe SK.

Toronto lost defender Chris Mavinga in the 29th minute with the French-born Congolese international favouring a leg. That promoted a switch in formation, moving to a back four from a three-man backline.

Prior to kickoff, Toronto honoured midfielder Jonathan Osorio, who made his 300th appearance for the club in all competitions last week.

Cincinnati was without the injured Ray Gaddis, Ronald Matarrita, Tyler Blackett, Allan Cruz, Alec Kann and Yuya Kubo. Leading scorer Brandon Vazquez came off the bench in the 67th minute in his return from injury.

In the absence of Kann, rookie Roman Celentano made his second MLS start in goal.