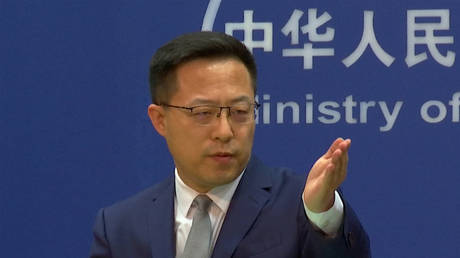 The Chinese government has urged American officials against sharing details with Taiwan about the upcoming meeting between China’s President Xi Jinping and US President Joe Biden, saying such a move would be an “egregious” violation of diplomatic protocols and bilateral agreements struck between the two countries.Asked about recent comments by US National Security Advisor Jake Sullivan, who said Washington would divulge details of next week’s top-level meeting to Taipei, Chinese Foreign Ministry spokesman Zhao Lijian offered a harsh response. “What the US said about briefing Taiwan on the meeting between the Chinese and the US heads of state gravely violates the one-China principle and the stipulations of the three China-US joint communiques. This is truly egregious, and China firmly rejects this,” he said on Friday, referring to a series of agreements between Washington and Beijing.

Zhao went on to argue that any “official interaction” between the US and Taiwan violates the ‘One-China principle,’ under which the People’s Republic insists the island is part of its sovereign territory, and that foreign diplomats should not make direct contacts with officials in Taipei.“There is only one China in the world. Taiwan is an inalienable part of China’s territory. The root cause of the tensions in the Taiwan Strait is that the Taiwan authorities have been soliciting US support to seek ‘Taiwan independence,’ and that some people in the US intend to use the Taiwan question to contain China,” the spokesman continued. “It is moves like this that are undermining the peace and stability across the Taiwan Strait.”Biden and Xi are set to meet next week on the sidelines of the G20 summit in Bali, Indonesia – the first face-to-face meeting between the two leaders since Biden took office last year. Though the White House has stated they will discuss “efforts to maintain and deepen lines of communication” and how to “responsibly manage competition,” the Taiwan issue is also expected to be high on the agenda.

In recent months US officials have increasingly treated Taiwan as a sovereign nation in defiance of the One-China policy formally recognized by Washington. President Biden has even vowed on several occasions that US forces would come to the defense of Taipei in the event of a Chinese invasion, but White House aides have repeatedly walked back those statements.During his report at the Congress of the Communist Party of China last month, President Xi highlighted the risk of an armed conflict over Taiwan. He reiterated that Beijing’s primary goal is peaceful reunification, but warned that it reserves the right to use force to prevent any attempts by the island to declare independence.