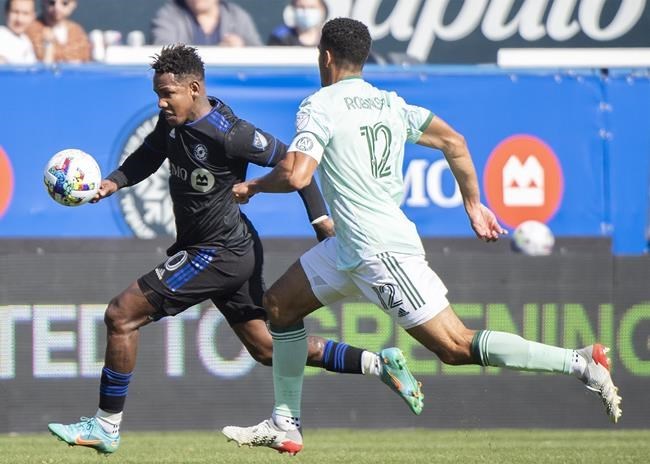 MONTREAL — A late header from Joaquin Torres was enough for CF Montréal to claim a 2-1 win against Atlanta United in Major League Soccer action Saturday afternoon.

The win moved Montreal into fourth place in the Eastern Conference and extended its unbeaten streak to six games in MLS, tying a franchise record.

Miller opened the scoring less than five minutes into the game, getting on the end of a Djordje Mihailovic free kick.

Following the goal, Montreal appeared to sit back and invite pressure from Atlanta, conceding 73-per-cent possession in the half.

The pressure invited dangerous chances and, just after the 10-minute mark, a free kick from Thiago Almada forced a diving save from Montreal keeper Sebastian Breza.

Almada came back a few minutes later with a shot from distance that almost found the top corner.

Atlanta struck early in the half as Montreal continued to struggle to keep the ball.

Six minutes in, Moreno found some separation in the box and fired a shot in off the post.

The early equalizer was enough to wake Montreal up and it immediately replied with a golden opportunity that forced a goal-line clearance from defender Andrew Gutman.

As Montreal continued to press for a go-ahead goal, Miller followed up a genius bit of dribbling with a cross that found the head of Torres to the delight of the vocal Stade Saputo crowd.

Both sides are back in action on May 7 when Montreal hosts Orlando City SC while Atlanta continue their road trip against Chicago Fire FC.