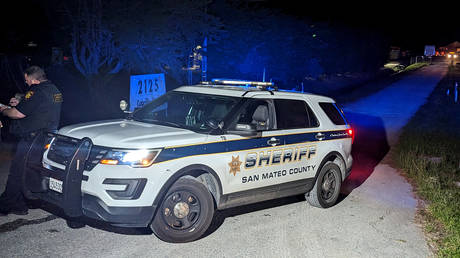 Seven people were killed at two separate sites in the town of Half Moon Bay, police say
Seven people were killed in a mass shooting in the town of Half Moon Bay in California on Monday, police have confirmed. The bloodshed comes just two days after a gunman shot 11 people dead during a Lunar New Year celebration in the Los Angeles area.California Governor Gavin Newsom said he had been visiting the victims of Saturday’s Monterey Park attack in hospital when he was told that another shooting had occurred, this time in the northern part of the state. It’s been “tragedy upon tragedy,” Newsom wrote on Twitter.The attack in Half Moon Bay, some 48km (30 miles) south of San Francisco, took place at two nearby agricultural enterprises.Four people were shot dead and one was seriously injured at a mushroom farm, while three more bodies were later discovered at a soil farm, located about a mile away. All of the victims were Chinese-American workers, according to police.

The suspected shooter was identified as Chunli Zhao, a 67-year-old resident of Half Moon Bay. Chunli was detained after being found sitting in his car outside the sheriff’s station, with the authorities suggesting that he had driven there to turn himself in. US news channels have aired footage of officers pinning the man to the ground.“This kind of shooting is horrific,” San Mateo County Sheriff Christina Corpus told journalists. According to Corpus, a semi-automatic handgun was discovered inside Chunli’s vehicle. The suspect has been “fully cooperating” with investigators, she added. However, the motives for the deadly attack currently remain unclear.The shootings in Monterey Park and Half Moon Bay were both carried out by Asian men of retirement age. The gunman, who attacked people at a dance studio in an LA suburb on Saturday, was identified as Huu Can Tran, 72. He took his own life as police tried to arrest him.
You can share this story on social media:
Follow RT on