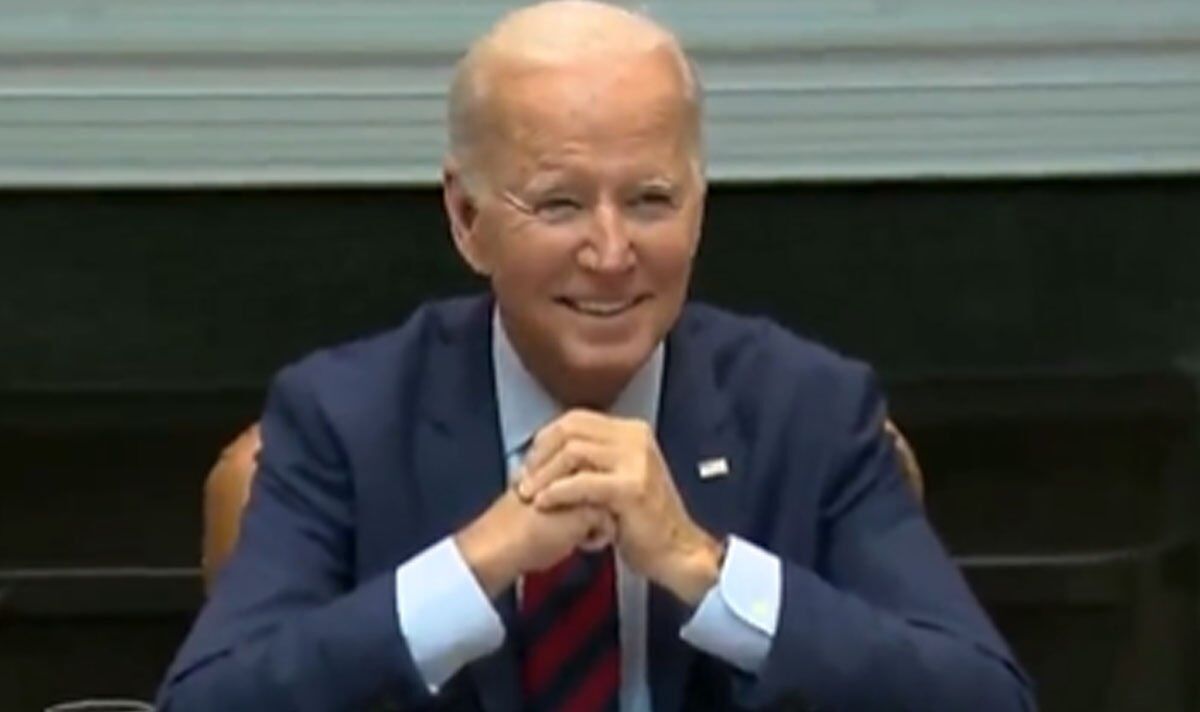 Joe Biden laughed at reporters trying to ask him, Vice President Kamala Harris and Senator Chuck Schumer questions during a meeting in the Oval Office. The move drew widescale criticism after the US President has not given a press conference in 72 days following political turmoil after classified documents were found in his home.

Twitter users were quick to lash out at the president for laughing.

Oscar Munoz wrote: “This is the beginning of the end for Biden. You can laugh all you want out of the Oval Office.”

Patty Stern claimed they were: “Openly mocking Americans. I just don’t get how this is okay.”

READ MORE: US to send Abrams tanks to Ukraine in U-turn

While other social media users rushed to the defence of the president.

Tim Charles noted: “They need to ask their questions in an orderly manner. One at a time.”

Nicholas Wheeler added: “There’s a load of people all screaming and not one person can ask anything. It’s chaos. They are laughing at the ridiculous situation. It’s just absurd noise.”

It comes as senior Democrats, dismayed by a steady stream of startling disclosures, expressed criticism Sunday of how President Joe Biden handled classified material after leaving office as vice president and disappointment that the White House has not been more forthcoming with the public.

Lawmakers who might have anticipated questions focusing on the debt limit or Ukraine aid when they were booked last week for the Sunday news shows found themselves quizzed about the latest development over the weekend in the document drama that has put Biden’s presidency on the defensive: During a search Friday of Biden’s home in Wilmington, Delaware, the FBI found additional documents with classified markings and took possession of some of his handwritten notes, the president’s lawyer said Saturday.

Biden should be “embarrassed by the situation,” said Illinois Sen. Dick Durbin, the second-ranking Democrat in the Senate, adding that the president had ceded the moral high ground on an issue that has already entangled former President Donald Trump. Special counsels appointed by Attorney General Merrick Garland are investigating both cases.

“Well, of course. Let’s be honest about it. When that information is found, it diminishes the stature of any person who is in possession of it because it’s not supposed to happen. … The elected official bears ultimate responsibility,” Durbin said.

Sen. Joe Manchin said Biden “should have a lot of regrets. … You just might as well say, ‘Listen, it’s irresponsible.'” The president told reporters on Thursday that he had “no regrets” over how and when the public learned about the documents and that there was “no there there.”

Despite their criticism, Biden’s fellow Democrats defended what they said was his cooperation with the Justice Department as the search for additional classified material unfolds. They contrasted it with Trump’s resistance to efforts to recover hundreds of documents after he left office.

“It is outrageous that either occurred,” Durbin said. “But the reaction by the former president and the current president could not be in sharper contrast.”

Biden voluntarily allowed the FBI into his home on Friday, but the lack of a warrant did not dim the extraordinary nature of the search. It compounded the embarrassment to Biden that started in earlier in January with the disclosure that the president’s lawyers had found a “small number” of classified records at a former office at the Penn Biden Center in Washington shortly before the November 8 elections.