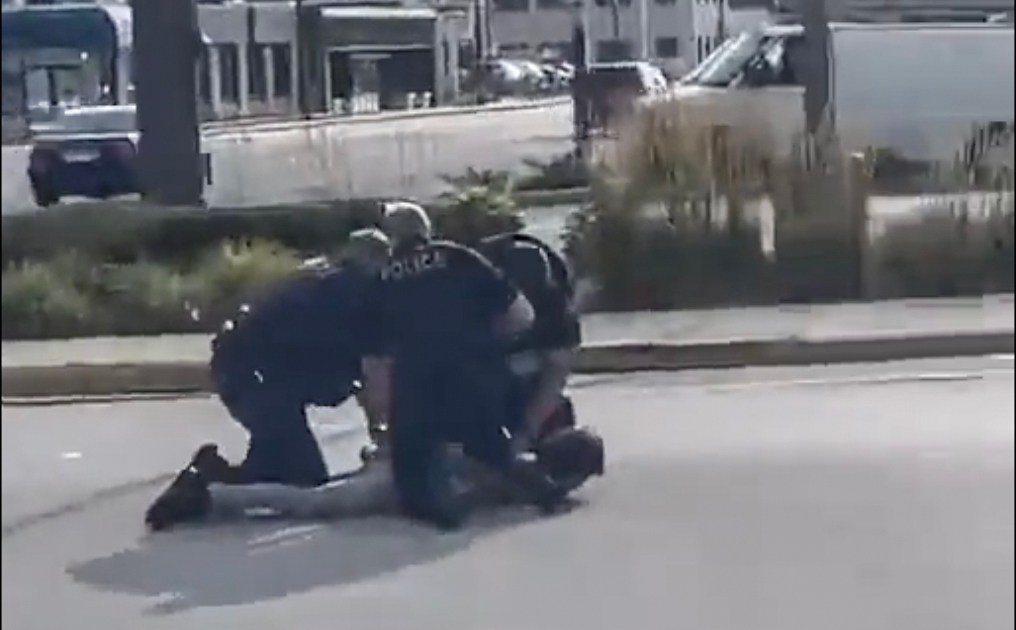 A viral video shows Hadi Abuatelah, 17, being beaten repeatedly by three police officers while on the ground.

Hadi Abuatelah, an Arab American teenager who was seen in a viral video being beaten repeatedly by police officers while on the ground during an arrest in Oak Lawn, Illinois, has been released to his parents.

Video published on social media on Tuesday showed Abuatelah, a 17-year-old Palestinian American, walking out of the juvenile detention while using a walking frame after he reportedly suffered from fractures in his face and pelvis, as well as internal bleeding in his brain.

Arab American organisations said they are demanding that police officers involved in the incident be fired and charged.

“We are demanding that the prosecutor file charges against the three officers who assaulted him and that they be fired from their positions,” Muhammad Sankari, organiser with the Chicago-based Arab American Action Network (AAAN), told Al Jazeera.

On July 27, police dash cam footage and a video captured by a witness showed Abuatelah, who was sitting in the passenger seat of a car, running from police during what appears to be a traffic stop. The cellphone footage showed police later punching and hitting the teenager in the head and in the legs while he was laying on the ground.

Police in Oak Lawn said officers were investigating the smell of marijuana coming from the car and that Abuatelah was carrying a gun in his bag and had tried to reach for it. They also say their use of force was justified.

The video went viral and sparked outrage around the country with accusations that the police used excessive force on the teenager. The video also angered members of the Muslim and Arab American community in Oak Lawn and nearby suburbs, and dozens of people have held rallies to call for justice since the video became public.

On Monday, Abuatelah’s family and the Council on American-Islamic Relations Chicago filed a federal complaint (PDF) accusing officers of engaging in a “racially motivated conspiracy to deprive plaintiff of his constitutional rights”.

According to the lawsuit, Abuatelah did flee on foot, but the three officers engaged in the excessive use of force during the arrest, causing him great physical and mental harm.

On Tuesday, Shady Yassin, the family’s lawyer, told reporters that the state attorney’s office had still not made a final decision on whether or not Abuatelah would be charged.

🚨📢THIS FRIDAY: Join us & allies to rally in support of Hadi Abuatelah, 17-yr-old who was brutally beaten nearly to death last week by three @OakLawnPD officers.

“At this point the state’s attorney’s office is looking to see if they’re still going to proceed with the charges against Hadi,” Yassin said. “Our belief is that they’re investigating this more closely because of all the circumstances,” he said.

Yassin said that Abuatelah’s next court appearance is in three weeks.

“We are continuing to put pressure on the Cook County State’s attorney’s office asking Kim Foxx to drop the charges against Hadi and to charge the three cops instead for the vicious beating,” Hatem Abudayyeh, executive director of AAAN, told Al Jazeera.