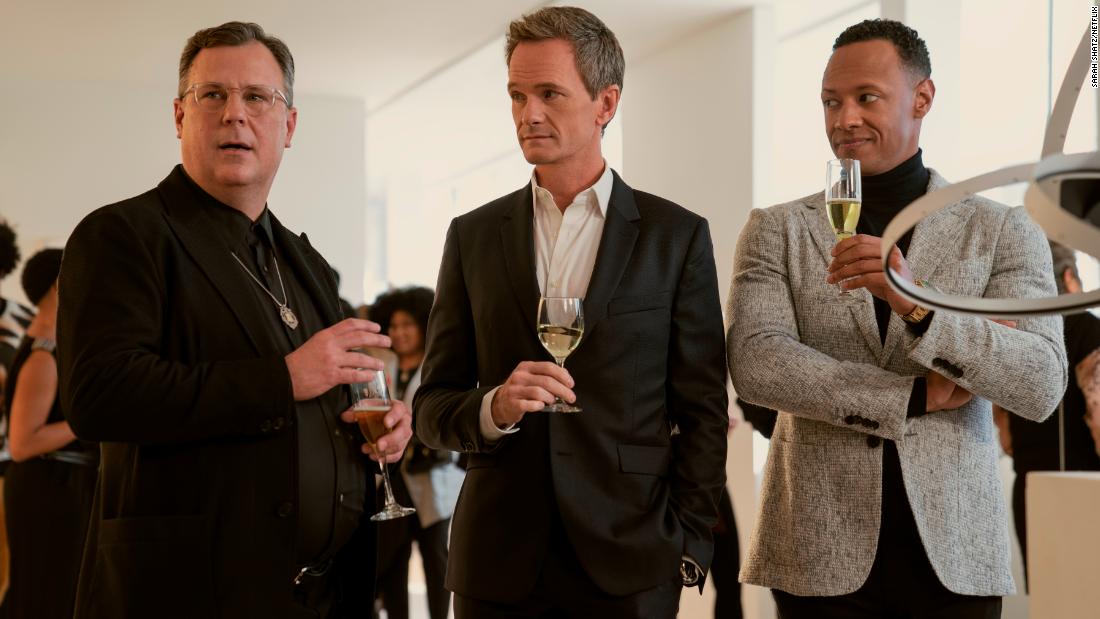 Harris’ Michael is stunned when his longtime partner Colin (Tuc Watkins) announces that he’s moving out, leaving him alternately wondering what went wrong and eager to reconcile.
At the same time, after his lengthy bout with monogamy, he’s vaguely intrigued by the prospect of experiencing some of the pleasures that he’s missed, if a little mystified regarding how to go about that. Indeed, times have changed since he was single, which leads to a lot of misread signs and awkward encounters, especially with the few younger chaps that pass through his orbit.
Co-created by Star and Jeffrey Richman (“Modern Family”), “Uncoupled” isn’t fully committed to that dating-again story arc, as Michael spends a lot of time hanging out with and drawing comfort from his tight-knit group of wildly successful friends, who are also shaken by the uncoupling; and his coworker (Tisha Campbell), throwing himself into his work selling high-end apartments, in part because he needs the money in order to hang onto his own.
That introduces a separate plot involving a wealthy and demanding woman (Marcia Gay Harden in all her imperious glory) who is getting divorced and whose business Michael desperately wants. But it’s a thinly written character, alternating between raging about her husband’s midlife crisis, bonding with Michael over being alone and acting like the sort of wealthy matron who swears profusely but feigns shock when somebody dares to use an expletive in the lobby.
The multitalented Harris has certainly earned a starring vehicle after “How I Met Your Mother” and his assorted other roles, but there’s only so much to be done with the warmed-over nature of the material, and a tone that alternates between “Sex and the City” and imitation Neil Simon.
That doesn’t mean there aren’t amusing situations, but rather that “Uncoupled” arrives too late to feel daring, even with the more explicit standards Netflix can offer. The fact that a maid character was excised after an actor complained about it merely underscores the old-sitcom-y aspects, which can charitably be filed under light escapism on the order of Star’s other half-hour for the service, “Emily in Paris.”
The abrupt nature of Colin’s departure does provide the show with a bit of mystery, but the main thrust of the story boils down to the not exactly earthshaking revelation that middle-aged divorce is tough, even if the poorest person in your orbit is extremely well to do.
That might give Star an opportunity to revisit his old stomping grounds from the perspective of a different band of Manhattan friends, but it’s hard to escape a feeling that “Uncoupled” is the TV equivalent of reheated leftovers. Or to put it in the parlance of these elite zip codes, it’s a bit like showing up to a glitzy fashion show in the year-before-last’s styles.
“Uncoupled” premieres July 29 on Netflix.